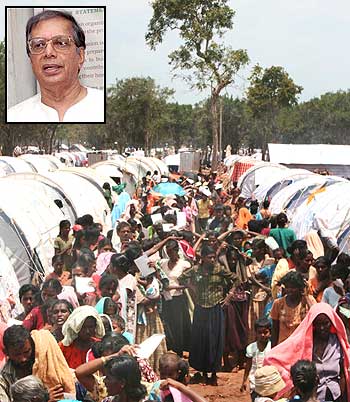 S C Chandrahasan is a Sri Lankan Tamil leader and founder of the Organisation for Eelam Refugees Rehabilitation. He is the son of the late Sri Lankan Tamil political leader Samuel Selvanayagam. He started OFERR in 1984 and it has offices outside every refugee camp in India and Lanka. He has been called the Lankan Gandhi.

Sitting in the OFERR office in Chennai, he looked tired but determined to keep going till all the Lankan Tamils are back home and settled properly without fear or discrimination. He spoke to rediff.com's A Ganesh Nadar.

When were the camps for internally displaced people started in Lanka?

Even when refugees were coming to Vanni, they had started these refugee camps for internally displaced people. At that time itself we had objected. We told them that by keeping them without freedom to move around, you are only aggravating the situation.

The people will be angry and their resentment will grow. It will instigate them to protest. The camps are necessary but the refugees should be allowed to move around with freedom in the day time.

Where will they go in the day time? What will they do?

'The Lankan govt must give amnesty to the Tamils' 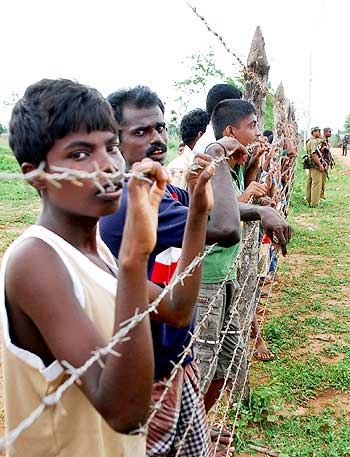 What did the government say?

They told us they were scared that violence would start if freedom was given and misused.

We told them that we want the Tamil-speaking people to return to their normal lives and a general amnesty to those who had indulged in violence. The government refused.

We reminded them that in 1971-1972 and 1988 the Lankan militants under the banner of the JVP (Janatha Vimukthi Peramuna (People's Liberation Front)) had indulged in violence.

They were given amnesty and the JVP is now part of the government. If that was possible, then this too is possible and we are justified in asking for it.

Giving amnesty to some people who were with 'Colonel' Karuna is not the answer. They should give amnesty to all those who give up violence and agree to return to democratic means.

General amnesty has been given to Sinhalas twice as I pointed out. Why can't it be given to the Tamils? It is there in the Indo-Sri Lankan peace accord.

The Sri Lankan government gave the LTTE arms and told them to use it against the Indian Peace Keeping Force. It was they who gave them arms so it has to be them who give the Tamils amnesty. It is their ethical duty to do so.

The human rights minister called for a meeting. The attorney general attended that meeting. He has given them written guidelines on how the amnesty can be implemented on the ground. The government accepted the attorney general's recommendations, but has not acted on them.

We have been telling them that for every single day that you delay, you are increasing the tension. We have told them that the earlier they implement the attorney general's guidelines, the sooner will the situation return to normal.

'The people are feeling cheated' 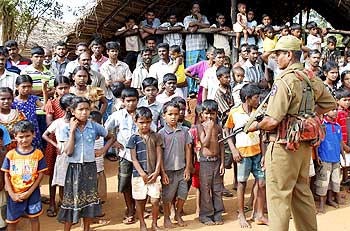 What happened in the last stage of the war?

At the end the army helped rescue Tamils who were not allowed by the LTTE to flee. The Tamils were grateful to the army. There was a feeling of happiness.

The Lankan government is squandering that good feeling by depriving the same Tamils liberty to move outside the camps.

Earlier it was the LTTE which did not allow them to move. Now it's the army which rescued them.

So the people are feeling really cheated. They are innocent people. Why should their freedom be deprived?

The government has allowed some people to leave the camps?

In Mannar rehabilitation is going on. The Tamils there who live outside the camps are happy. In Vavuniya not only are people living there but even elections have been conducted in that area.

What is your demand today?

They should allow those farmers whose fields have been de-mined to return to their farmland and start agriculture. If this is allowed then this monsoon which starts in October will make that the golden area of Lanka. It will become the granary. It will become rich with produce. It will kick-start the economy there.

Let us not waste this monsoon. Let us not delay. The farmers can stay in the camps at night till the government feels it okay for them to return to their homes. 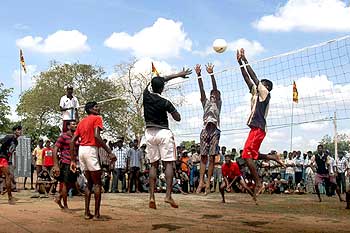 Are you planning to help the farmers from here?

The first thing Indian Foreign Minister S M Krishna did was to consult eminent scientist M S Swaminathan as to what needs to be done in their fields when the Tamils of Lanka return home. We too went and met Swaminathan.

We told him that our land was rich and alluvial and very good for growing paddy. We had earlier supplied rice to Yalpanam and the rest of Sri Lanka.

We also told him that our fishermen supplied fish to the rest of the country. It will require only four months in the monsoon for the people to get back on their feet. Swaminathan has given his written advice on what needs to be done.

The farmers in the camps are waiting to go back. Their hearts are beating joyfully at the prospects of farming without fear. The farmers are asking for seeds as all their past produce has been destroyed.

They want to go back with seeds in their hands. They don't want tractors and are ready to till with bulls. Swaminathan has suggested that we go back with old strains of seeds which will be suitable for that land. He said the new strains required a lot of fertilisers which the Lankan Tamil farmer would not be able to afford now.

De-mining is still going on and the Indian government is helping there too. Once that is over we would like to go back.

Why are refugees still coming to India? The war has long been over.

Till there is a general amnesty and rehabilitation the youth will continue to come here.

Are the ominous white vans in which Tamil youth were kidnapped still operating?

There are almost three lakh (300,000) people in the camps. No one can kidnap anyone in their midst. But in the areas where Tamils are living outside the camps the fear of the white vans is still there. They are still operating.

'The love we get in India is unbelievable' 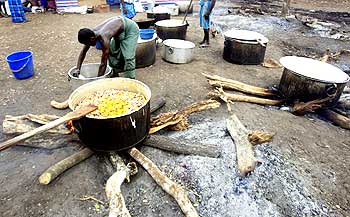 What is the condition of refugees living in the camps in Sri Lanka?

They are getting their food. The calories they need to survive is calculated and given to them. They are cooking their own food. What they lack is freedom to move around.

How would you compare the condition of refugees in Indian camps and in Lankan camps?

Here there is no fear. There is total freedom in the day. Our people are working in the villagers around them. We encourage them to work. We don't want them to become lazy. They will bring back that laziness to Lanka when we return. We tell everyone to work.

The love we get in India is unbelievable. Do you know that not a single Indian has ever entered the refugee camp and disturbed us or abused us or accused us of any wrong doing? They have always treated us with warmth.

Has the Sri Lankan government put the Tamil issue on the back burner?

We know that and we expect the international community and India to put pressure on them to bring it back to the forefront.

'LTTE wiped out an entire generation of Tamil leaders' 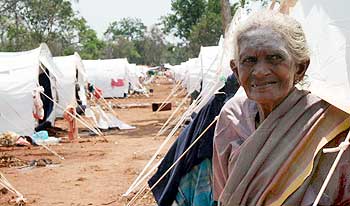 Is there one Tamil issue in Lanka or three -- plantation Tamil issue, Muslim Tamil issue and the rest of the Tamilians?

There is only one Tamil issue. It was the mistake of the LTTE in isolating the Muslims and alienating them from the rest. It was the Sri Lankan government that told the plantation Tamils that they were different. For us all Tamil speaking people are the same.

Who would the Tamils look upon as their leader?

Only an election will tell us that. Let us not forget that the LTTE wiped out an entire generation of Tamil leaders. There is a political vacuum there which will be filled after many years. It will take a lot of hard work for a new leadership to emerge.

Is there any fear of the Lankan government changing the profile of the north and east by exporting Sinhalese from the south?

We have no problems with the Sinhalese coming and staying next to us. Most bakeries in the north and east were always owned by Sinhalas. What we are objecting to is the government taking over prime agricultural land and giving it to the Sinhalese and also giving them subsidies.

Let the Sinhalas come and buy land from us. Let not the government distribute our land to them. We are a minority in Lanka but a majority in our area. The government should not forcibly try to change this demography. That will be discrimination again.

When would the refugees in the Tamil Nadu camps like to go back? Are you preparing for that?

We would like to go back after the refugees in the camps in Lanka go back. Once they tell us they are safe and happy there we will join them. We are compiling peoples' residence details, property details so that we can help them recover it when we go back.