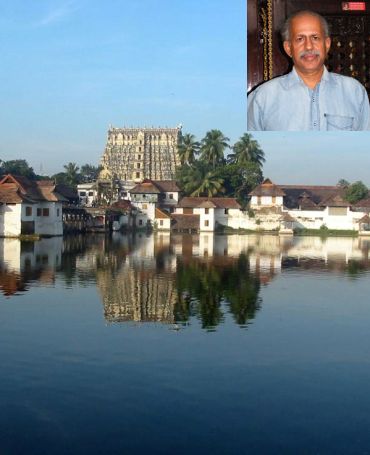 Ever since treasure worth crores of rupees was inventoried in the secret cellars of the Sree Padmanabhaswamy temple in Thiruvananthapuram, noted historian Professor MG Sashibhushan has been a very busy man with journalists from all over the world seeking his opinion on the historical background of the temple and the city.

Though newspapers have assessed the worth of the assets found in the cellars, Prof Sashibhushan says it is just mere speculation, and nobody, not even those who made the inventory, has calculated the value yet.

In this interview to rediff.com's Shobha Warrier, he goes back centuries to trace how the riches reached the erstwhile Travancore royal family and the Sree Padmanabhaswamy temple.

'Temple's history is as old as the Sangam period' 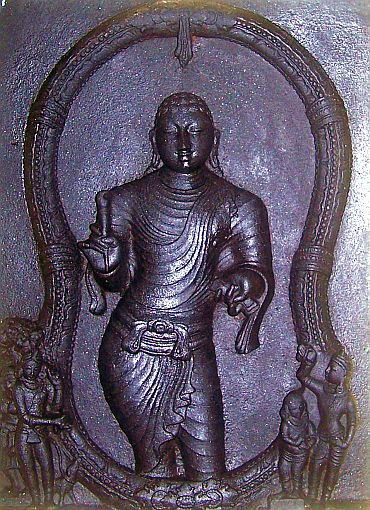 It is said that the Mathilakam records (written on cadjan [cocoa-palm leaves]) mention about the secret cellars and the treasures of the Padmanabhaswamy temple. Does that mean there was knowledge of this wealth earlier itself?

All those who have some knowledge of the history of Kerala know about the wealth of the Padmanabhaswamy temple.

But only the eldest member of the Travancore royal family knew exactly how much wealth was there in the temple.

How far back can we go if we were to trace the history of the temple and its wealth?

There are many who say that the temple's history is as old as the Sangam period. In Silappathikaram (epic poem in Tamil, written in the 5th-6th century AD by Prince Ilango Adigal), a sea-side golden temple called Adagamadam is mentioned.

It also says the deity of the temple is Lord Vishnu in a reclining pose. Kannagi (central character of Silapathikaram) is said to have come to the temple.

Many historians say that the temple mentioned is the Padmanabhaswamy temple as its deity is Lord Vishnu in reclining pose and it is also near the sea- side. Why it was described as a golden temple was because it was a rich temple and also the one with golden thazhikakudams (domes on top of the gopuram). That is why Adagamadam is Padmanabhaswamy temple itself. 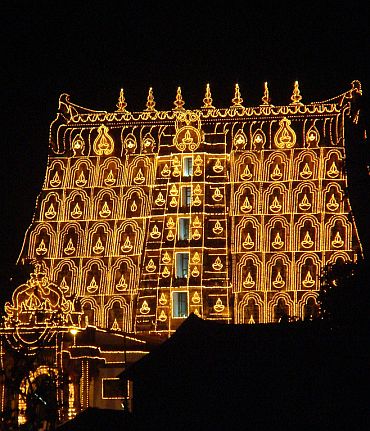 Even in the puranas (religious texts) like Varaha puran, the temple is mentioned.

The first historical evidence about the temple is available in the Vaishanva Azhvar poet Nammazhvar's creations. These were written in the 9th century.

He had written 10 kirtanas in praise of this temple and the deity. His contemporary Thirumanga Azhvar also had written kirtanas about Padmanabhaswamy. These poems show without any doubt that this temple was in existence in the 9th century.

It is also mentioned in the 12th century in a Sanskrit poem by an unknown poet. In the 13th century, there is a Malayalam creation, Ananthapura Varnanam.

Records show that people like Ramanuja Acharyar, Chaitanya, Guru Nanak, etc visited the temple. Guru Nanak had not started the Sikh religion then; he was a Vaishnava Goswami. He had even written a poem on Sree Padmanabha and it is included in the Adi Granth.

In short, Padmanabhaswamy temple was known all over India long ago. Vaishnavites see this as one of the 108 Tirupatis.

'Nobody was aware of the extent or the worth of assets' 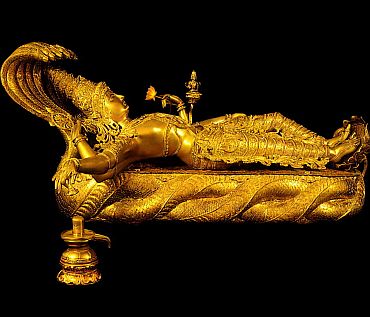 Was it from the offerings of the devotees that the temple got its wealth, and were they kept in the secret chambers then also?

The assets of the temple were safely kept in the secret chambers all the time, that is, from the time the temple was built. Those who have learnt about the history of the temple knew there were assets but nobody was aware of the extent or the worth.

Yes, the assets were mainly the offerings of devotees and also from the owners of the temple, that is, the Travancore royal family.

In this temple, devotees were not given much importance because it was owned by a family. In the early days, devotees from the public could only pray there and not give any offerings.

That was because it was believed that if you offer anything to the God, you become the dasa of Sree Padmanabhaswamy. Later, the family gave the permission to the public to give offerings. 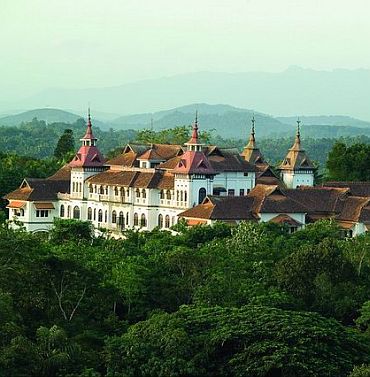 Was it after Marthanda Varma surrendered the state to the temple and became a dasa of Sree Padmanabha?

No, it is much before that itself. Not only the family but other kings who were their guests also started putting money in the hundi.

Did money from the state also go to the temple treasury?

Another important thing to note is, the Travancore royal family followed the matrilineal system. So, the money from the royal treasury did not go to the wife and children of the King but to his nephews and nieces.

When I say royal treasury, I don't mean revenue collection but the personal property that also went directly to the temple treasury.

'The temple also had a lot of property' 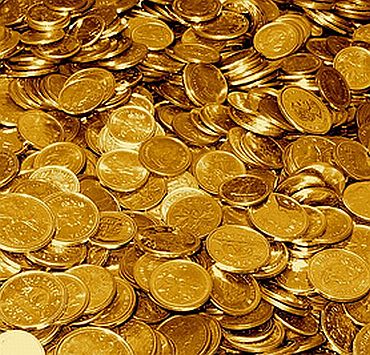 How did they differentiate between the state and the temple treasury?

And, whatever the royal family got from their own land was their revenue. The family also contributed to the temple treasury.

As rulers, they had the authority to spend one sixth of the state revenue but this family did not spend that much because they led a very simple life.

Other than this, the Travancore family got revenue from exporting pepper to the world and they lived from what they earned from this though business from pepper started only in the 17th century.

The Travancore kingdom also collected land tax and that was added to the state exchequer. In short, it was a rich state. Land revenue went directly to the state treasury. The temple also had a lot of property and the income from that property accrued to the temple treasury.

'Assets are the property of the temple' 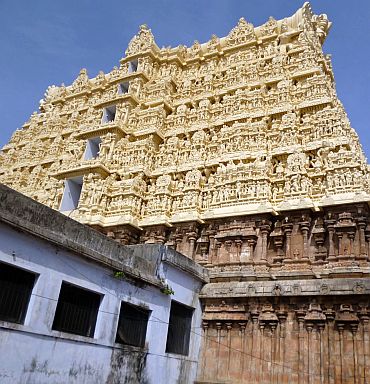 So, who does the assets found in the cellars belong to, the family or the temple?

It is the property of the temple. Though the wealth belonged to the temple, in some emergency situations, rulers could avail this for the benefit of the state but they were bound to make restitution as soon as possible.

There was a recession in the 1930s and it is mentioned at many places that they had taken some wealth during that period though there is no evidence to show that.

Who are the real owners of the temple property? Is there a trust?

In the old days, it belonged to the Travancore royal family. Before that, the five branches of the family had ownership rights. The senior-most member of these five families headed the trust.

Later on, disputes arose between the members and the right went to two families.

'The secret chambers have always been there' 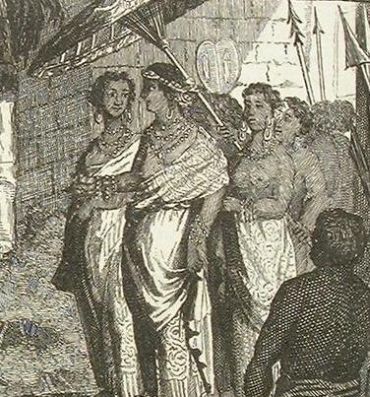 The tax collectors of the temple property were called Ettu Veettil Pillas.

And they were the children of the maharaja from his Nair wives. There were conflicts between the rulers and the Ettu Veettil Pillas due to which the temple was closed for 50 years or so and it was set fire to in the 17th century.

It was reopened when Umayamma Rani ruled the state as the regent Maharani.

Is there any truth in the talk that the wealth was kept in the scared chambers when Tipu Sultan started moving towards Travancore?

It was only a rumour and perpetuated by those who have no knowledge of history. Like I said, the secret chambers have always been there and they contained the wealth of the temple. 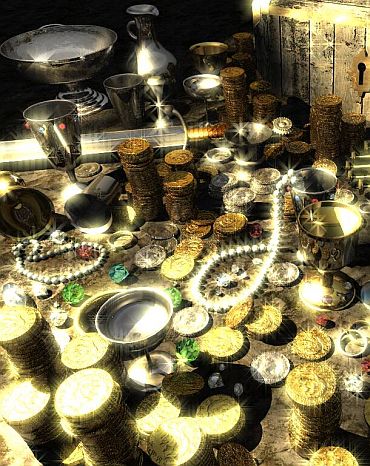 How important is the treasure found in the chambers if you look at it from the historical, religious and cultural point of view?

From what we hear about the assets, there are no inscriptions. Yes, we can study about the diamonds, jewellery, ruby, pearls, etc they have found movable idols, crowns, gold and silver bars.

You said earlier that the royal family conducted trade in pepper. Kerala also sold various other kinds of spices to many countries. Do you think this treasure will throw a light to Kerala's trade with the world?

The coins from those countries may be there. There are a lot of gems also in the chambers, which in all probability can be from the Deccan. As far as I know, they have not so far found anything that throws light on the kind of trade Kerala had with the world.

The head-less archaeology department of the state government (it does not have a director for some time now) says it will take care of the wealth. It is a natural tendency for all to ask for a part of the wealth!

Today, all those who have no competence or knowledge of ancient temple history are spouting all kinds of nonsense.

'The treasure is a symbol of Indian pride' 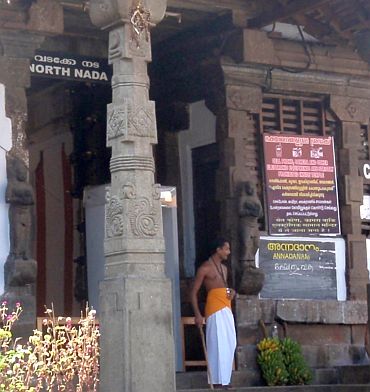 What should be done now with such a huge treasure as it is important that it has to be kept very safe?

Yes, it has to be safe, but you must remember that the treasure belongs to the temple and nobody else.

Is it not part of our history?

Should it remain inside the cellar?

For the time being, let it remain there. It should not go to wrong hands. We should keep it safely. Anyway, they are making an inventory under the instructions of the Supreme Court. Once the court comes out with a decision, as per the inventory, we must study those things which are of archaeological importance. This should be done under heavy security inside the temple.

There can be a beautiful museum there itself. Studies should be conducted only after that.

'Temple cannot sell this wealth and create a museum there' 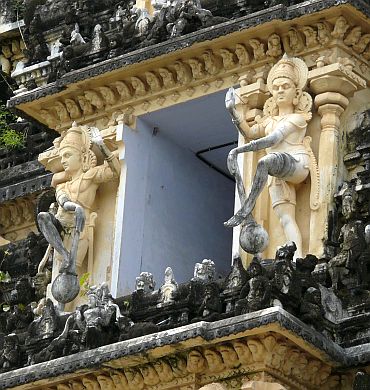 Do you envisage a museum of international standards coming up here like what we see in London or Paris?

Yes, it is possible. It has to be there. But you may need at least Rs 50 crore to construct such a museum. Who will fund it? The temple cannot sell this wealth and create a museum there. They should not, too. Let them take an appropriate decision at the appropriate time.

Who can take the decision?

The custodians of wealth, which is the temple right now. Also, the royal family.

But it is not the personal property of the royal family

Do you see the denouncement of the Supreme Court action as a good thing so that we now got to know about such a huge wealth?

I don't see it as a good thing, as Thiruvananthapuram has become an unsafe place. 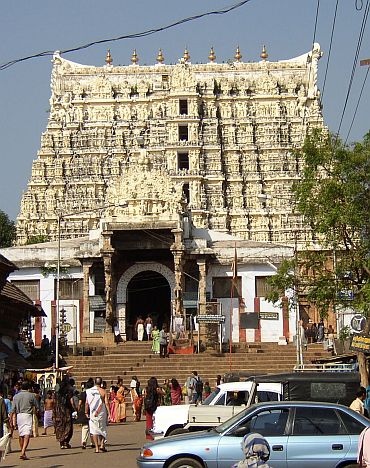 Rationalists and atheists also have entered the scene and they are clamouring for using the wealth to construct schools and hospitals. As a historian, how do you react to this?

Rationalists in Kerala have had no voice till now. That is why they have entered the fray.

My question is, why do they not talk about using the wealth of a church or a mosque for such purposes? These people are not rational, they are irrational.

If the government of Kerala had not taken the wise decision of saying that the treasure belongs to the temple, there would have been a communal division in Kerala. I would say the chief minister of Kerala (Oomen Chandy) deserves all compliments for declaring it as the property of the state and providing security to it.

Do you think the interest world over is due to the possible history behind the wealth?