'Govt is afraid they may hurt the mullahs' 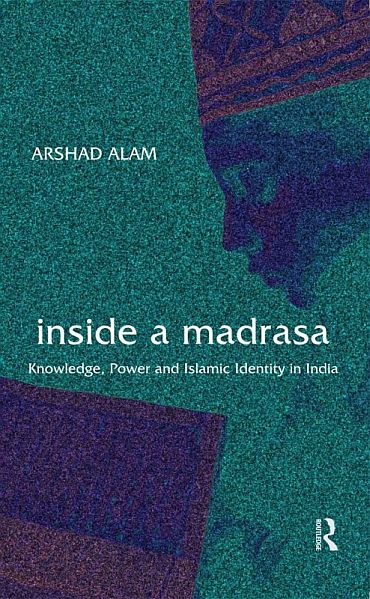 In India, the mention of a madrassa raises eyebrows. The Islamic schools have often been branded as hubs of terror and nurseries of hate. But is that really the case?

Rediff.com's Vicky Nanjappa talked to Dr Arshad Alam who teaches at the Centre for Jawaharlal Nehru Studies at the Jamia Millia Islamia and recently wrote on the issue in his book titled, Inside A Madrassa: Knowledge, Power and Islamic Identity In India.

Dr Alam says that while madrassas are important, it is essential that they are brought under the control of the State so that education imparted there is modernised.

He also blames the State, stating that when it comes to taking decisions regarding the modernisation of a madrassa, the government always stands back, as it is believed that they may hurt the mullahs who control the Muslims (which according to him is a misconception).

In an environment where madrassas are increasingly being seen as orthodox institutions that spawn terrorism and religious violence, this book argues that such a focus obviates an impassioned understanding of madrasas as social institutions and how they create and sustain a wide variety of possible interpretations of Islam. 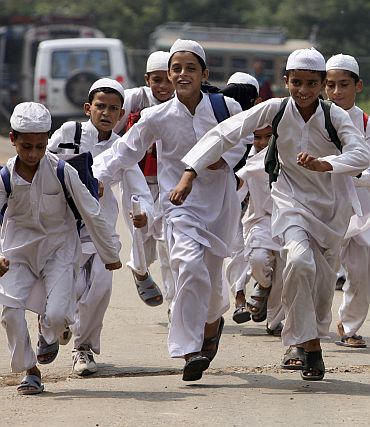 There is a lot of controversy surrounding madrassas. Some term it as schools of terror. What are your thoughts?

My argument is that there is a misconception that madrassas teach Muslims hatred towards other religions. Madrassas in India are not schools of hate.

It is basically internal politics of the Muslim community. There are many groups among Muslims and through these madrassas they try and prove that their interpretation of Islam is the best.

These groups are in competition with each other -- not with other religions.

Are you saying all madrassas in India only speak about Islam or is there one section which preaches hate?

Not that I know of. 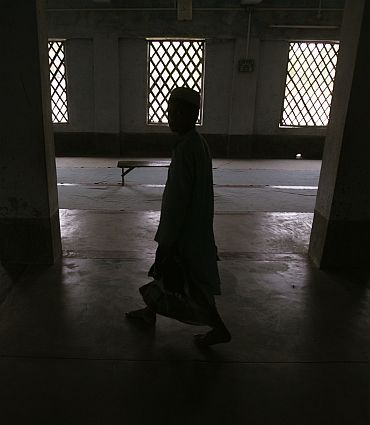 Over the years you may have heard people terming madrassas as schools of hate and nurseries of terror. Why does this happen if everything is so clean?

There is a two fold reason for this. One, right-wing groups tend to associate a problem with any issue pertaining to a minority. Madrassas are Islamic institutions and hence it classifies as a problem for them and also an object of suspicion. Second, the defiance by a certain sect of the Muslims who do not want modernisation of madrassas. They prefer to remain shut out.

What prevents Muslims from modernising the madrassas?

The State wants to modernise the madrassas. There are also moderate voices within the Muslim community who want it. Madrassas have to be made accountable for what they teach and how relevant these teachings are to the modern world.

However, there are a few within the community who do not want this change and will keep blocking any attempts by the State to initiate a change. 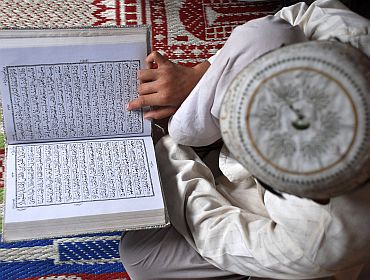 Is there an accountability among the madrassas?

There are the independent or azad madrassas, which are the problem in some cases.

There are, however, some which are under the All India Muslim Personal Law Board, which is under the ambit of the respective state government.

In the case of the independent institutions, sometimes there is not enough financial accountability. There is money coming in alright, but the community has the right to know how it is being spent or should be spent.

Hence, one cannot just say that the spotlight on the madrassas has increased only because of a ploy by certain non-Muslim groups.

'A few modern equipments will not modernise a madrassa' 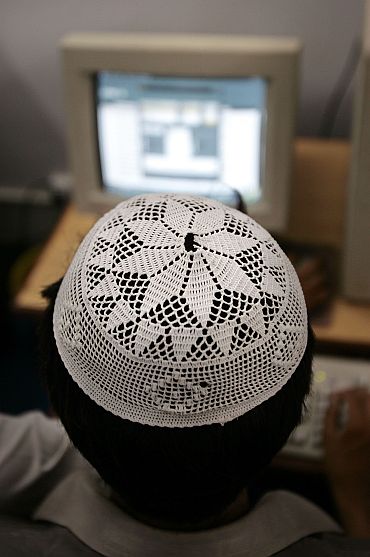 You said in a lecture that the data of terror activities and terrorists don't support the hypothesis that madrassas make terrorists.

The Indian Mujahideen and the Students Islamic Movement of India have been branded as terror groups. One can say that 99 per cent of the names attached to these organisations have studied in modern schools and not madrassas.

Moreover the technological know how that these terrorists have could not have possibly come from a madrassa. As per my knowledge, most madrassas do not have even a computer.

Do you think that madrassa education is important for Muslims or should the children just go to regular schools instead?

Each community has the right to have a religious tradition and this is a constitutionally-guranteed right. However, I believe that madrassas need to be modernised. How it needs to be done is a very tricky question. Adding a few modern equipments and subjects will not modernise a madrassa.

'Madrassas should be made more accountable' 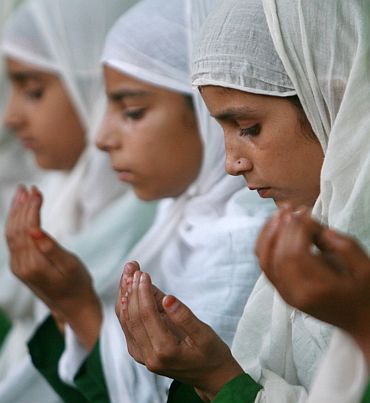 What according to you can modernise a madrassa?

First and foremost, it should be made more accountable and independent madrassas should be under the ambit of a board monitored by the state government.

Modernisation is in terms of secularism and gender equality, and that comes from modern social science classes.

Do you think it would be better if madrassas are shut down completely?

No I would not agree with that. I would, however, want to say that this should not become a replacement for a modern school. Let us have a system where you teach your children about religion, but ensure that it does not clash with the modern school system.

Ideally, let us dedicate two hours to religious education and the rest of the time for modern education. 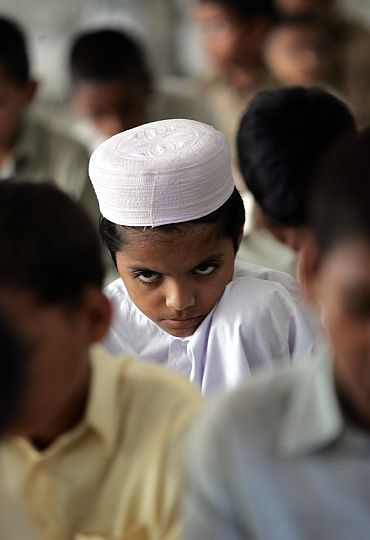 Do you think the maulanas are the culprits here?

Most religious entrepreuners who speak about the need for only madrassas do not send their children to a madrassa. They have one policy -- while keeping the community backwards, they send their children to modern schools. It is hypocrisy. I see maulanas coming on television and speaking in English whereas that is not what they preach in the madrassas. Where have they learnt English? Not at the madrassa for sure (laughs).

The Sachar Committee reports that just 4 per cent of the Muslims go to madrassas. Is this correct?

That is an incorrect data. I would put it at around 12 and 14 per cent.

Which states have the most madrasas and why?

Most madrassas are in Uttar Pradesh and Bihar. This is due to the collapse of the primary education system. Madrassas have moved in where the states have failed to deliver.

Rather than having no education parents send their children to madrassas so that they have basic education. These two states are the nurseries of madrassas. 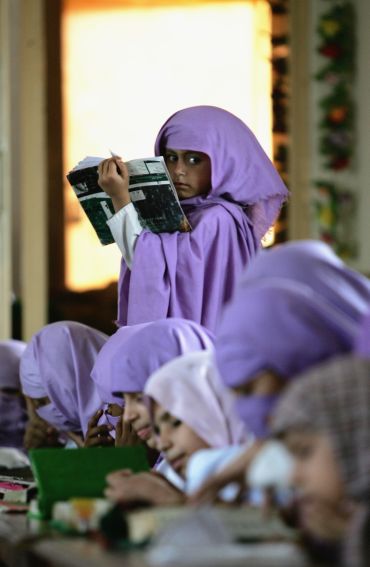 Do you think madrassas should be brought under the ambit of the government or should they all be run privately?

What is required is that the independent madrassas should be brought under the board. The azad madrassas run on a very loose structure and this ensures no change is possible.

In order to have reforms one needs a centralised structure. The government had proposed a central madrassa board but then the madrassas opposed this and the government gave in.

The government would not have done it if it was a Hindu issue. We have a peculiar situation where the State believes that mullahs control the Muslims. This is false impression. I am making a bigger point and the State has to act like a modernising agent.

There is no shying away from that responsibility.

Through your book what message have you managed to convey regarding madrassas?