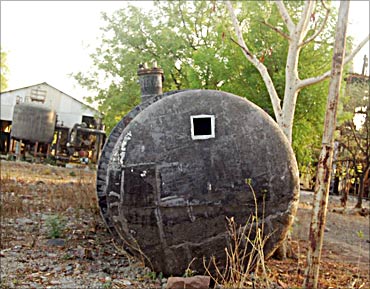 A huge ominous looking, dilapidated hospital greets you at the entrance of what was the dreaded Union Carbide of India Limited plant in Bhopal. As you surreptitiously venture inside the sprawling 93-acre plot, red metal in various state of erosion coldly overlooks a neighbourhood, whose people still shiver when they recall that fateful night of December 2, 1984.

Nearly 41 tonnes of methyl isocyanate (MIC) and Phosgene gas, both noxious and lethal chemicals that are used as intermediates in the manufacture of fertilizer Sevin, leaked out after midnight on December 2 from an underground storage tank that had been installed at the Indian subsidiary of Union Carbide Corporation in Bhopal. 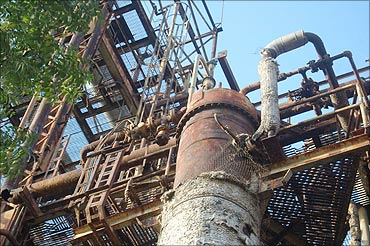 The leak lead to the largest industrial catastrophe in the world's history that killed some 15,274 (official figure as per a judicial review) and affected some 6 lakh --of Bhopal's total population of 9 lakh in 1984 of the town's populace who suffer from chronic joint pains, itchy skin, muscle weakness, poor eyesight, lung cancer to this day.

It was not just the MIC that wreaked havoc. Another poisonous chemical agent Phosgene also leaked into the air and spread fast as the winter winds blew across the plant and spread the gas fumes to other parts of Bhopal.

All the convicted accused got bail 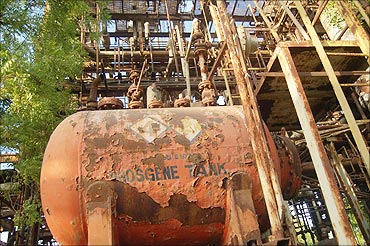 The facts need to be reiterated as Bhopal's Chief Judicial Magistrate Mohan Tiwari, announced his verdict convicting eight Indians--notable amongst them Keshub Mahindra, currently chairman of Mahindra & Mahindra, who was the erstwhile chairman of Union Carbide India Limited.

Ironically, all 8 of them were released on a bail of Rs 25,000 despite the fact that these accused were also served two years' imprisonment by the lower court under Section 304 A of the Indian Penal Code instead of Section 304 (Part II). Interestingly, Justice A M Ahmadi in his September 13, 1996 judgment had diluted the charge from Section 304 (Part II) to Section 304 (A).

'An unresponsive and uncaring state' 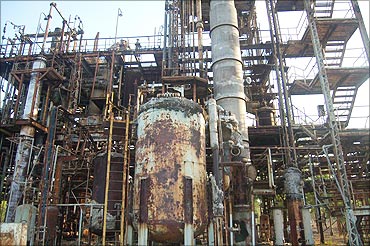 After this judgment there was no way the lower court would have announced punishment of more than two years, rue a number of activists who have been in the forefront of the victims' fight for justice from an "unresponsive and uncaring state administration and a judiciary that connives with the state government, union government and multinational companies," says Abdul Jabbar of Bhopal Gas Peedit Mahila Udyog Sanghatan (organisation of women affected by the Bhopal gas tragedy). 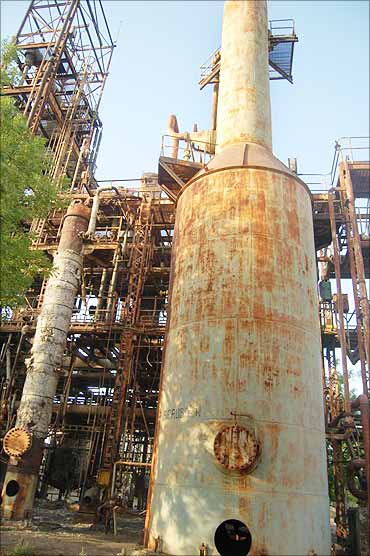 While UCC has shirked off its responsibility by saying that they made no decisions as far as day to day maintenance and operations of their Indian subsidiary were concerned, people who worked in the factory said that all decision to cut costs, design specifications and daily production estimates came from the US-based headquarters. 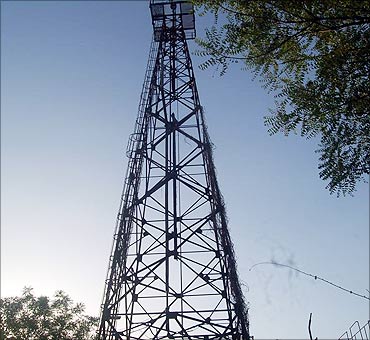 Take the case of this (pictured) tower. One of the floor engineers who now works as a tourist guide (he is one among several who take European tourists on a guided tour of the premise with permission from the district collector)  said that had this tower been manned by 5 people instead of one on that fateful day, several thousand precious lives could have been saved.

But why was only one man operating on this tower that maintains release of toxic gases in air? "Because the company had downsized its operations to cut costs," says he while refusing to come on record for this story. "The absence of four people from this tower was also part of UCC's cost-cutting exercise." 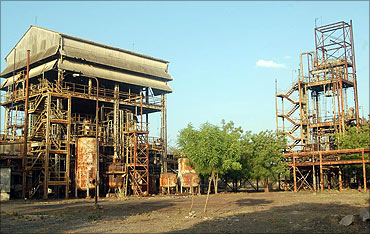 There is, though, one more startling fact, which if the company had been responsible enough, that could have helped save thousands.

According to the tourist guide, when the gas leaked out from the underground storage tank, it formed a blanket almost three feet above the ground. Whatever was below this height remained unaffected. Most of the trees got charred because of the  gases were charred above three feet, he says to stress his point.

"The workers were trained on how to act in case of leakage of Phosgene and MIC. The environment safety engineers had advised them to sleep on the ground in such a situation with their faces covered with moist handkerchiefs to avoid getting affected by both these gases.Those workers who did so survived while those who panicked and ran towards the gate to save their lives died."