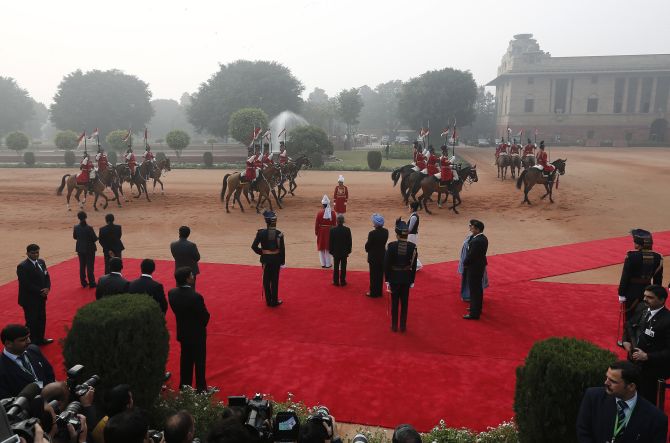 In the two years that President Pranab Mukherjee has spent so far at Rashtrapati Bhavan, the country's first citizen has shown a marked preference for playing the gracious host over being a travelling head of state.

Unlike his predecessor Pratibha Patil, who covered 23 countries during her five years as President at the cost of Rs 223 crore to the exchequer, Mukherjee has visited only three countries -- Belgium, Turkey and South Africa -- on two short trips in his first two years in office.

But the lack of foreign travel did not impact his diplomatic efforts as he has hosted 75 foreign dignitaries so far at the imposing Rashtrapati Bhavan, including the Emperor of Japan, heads of state and foreign ministers.

In his second year as President, 78-year-old Mukherjee has hosted 33 foreign dignitaries, which means a guest has come calling to Rashtrapati Bhavan on every 10th day. 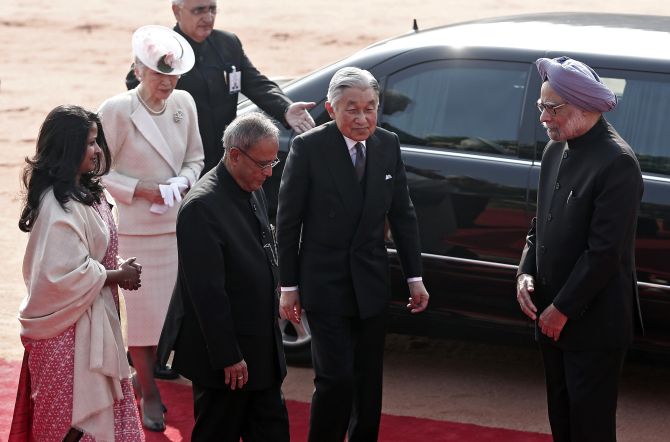 Besides the Emperor of Japan, who visited the country after 53 years, the King of Bhutan, Presidents of Sri Lanka, the Maldives, Afghanistan and Germany, Prime Ministers of Nepal, Pakistan, Bhutan and Mauritius, the General Secretary of the Communist Party of Vietnam, Speaker of Bangladesh Parliament and Foreign Minister of China are among those whom Mukherjee, who completes two years in office on July 25th, has hosted so far.

Not only that, the lawns of Rashtrapati Bhavan was used for the swearing-in ceremony of the NDA government led by Prime Minister Narendra Modi. Over 5,000 guests attended the ceremony, including the leaders of SAARC countries and the prime minister of Mauritius.

The full range of services were provided in the guest wing of Rashtrapati Bhavan for the visiting foreign dignitaries prior to the Dinner in the Grey dining room on the day of the swearing in. 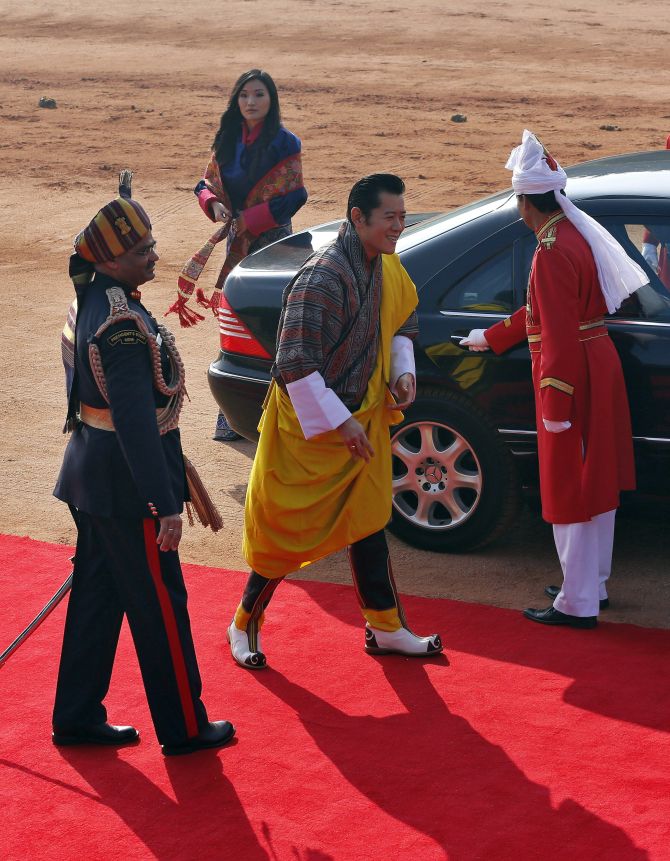 Under Mukherjee, the kitchen of Rashtrapati Bhavan has been given a makeover with chefs receiving special training to cook up a variety of exotic flavours to tickle the palate of the dignitaries visiting the President's abode.

But Mukherjee's predilection for hosting was not limited to dignitaries only as he threw open the gates of Rashtrapati Bhavan for a first-ever residency programme for a period of up to one month to innovators, writers and artistes selected through a national-level screening process.

Under President Mukherjee an online booking system has also been introduced for visiting Rashtrapati Bhavan, replacing the old and cumbersome process of making a request in writing to officials to obtain permission for a visit. 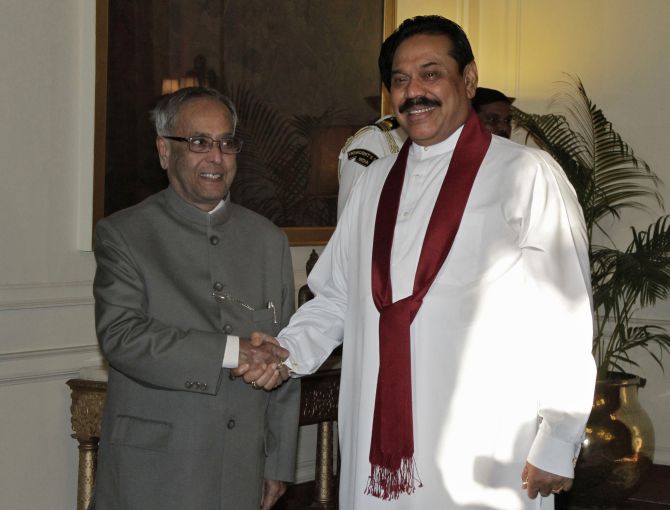 The effort has borne fruit as 6,62,000 people visited the Victorian era edifice during the second year of his Mukherjee's presidency. The weekly Change of Guard ceremony alone has attracted over 10,000 visitors in the last one year.

People looking to interact with the President were given an opportunity to do so through virtual media as he hosted them on social networking sites like Facebook, twitter.com and YouTube.

The social media initiatives, too, have been successful in bringing Rashtrapati Bhavan closer to the people with over five lakh people having so far visited the YouTube Channel of Rashtrapati Bhavan. Also, Mukherjee attracted over one lakh followers within 20 days of opening his twitter account. 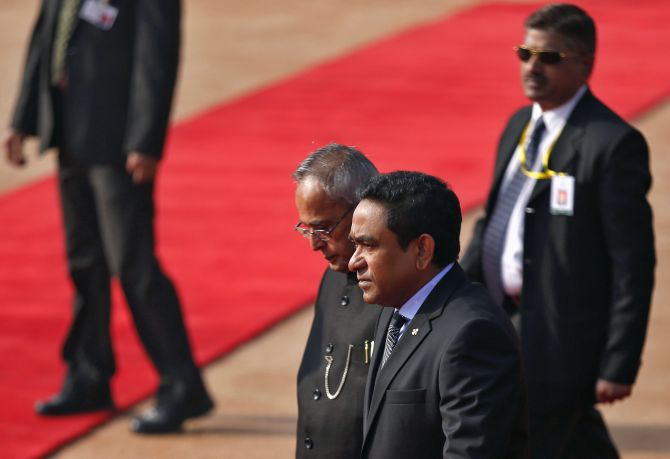 Rashtrapati Bhavan also witnessed a number of conferences, including that of governors which dealt with reports submitted by various Groups of Governors on important issues like external and internal security, among others.

But while foreign visits may not enthuse the President, he has travelled extensively in the country from Jammu and Kashmir to Andaman and Nicobar islands, making 82 visits at an average of three every month. 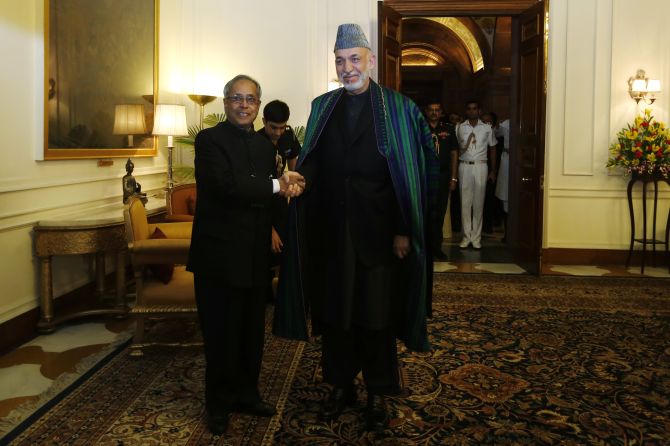 In these two years, Mukherjee has visited all the eight states in the north-eastern region, which is considered to be a "natural bridge" between India and Southeast Asia.

Under Mukherjee, an attempt has also been made to preserve the impressive heritage of the 85-year-old building through renovation work. 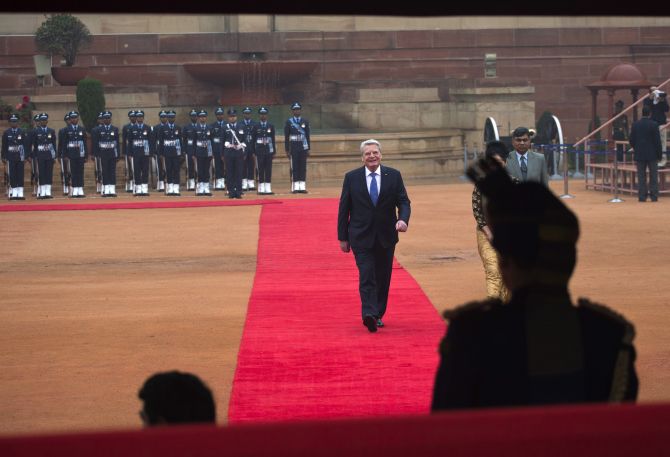 A dilapidated building inside the President's Estate which was due for demolition was restored within five months and converted into the Pranab Mukherjee Public Library for the welfare of the residents of the Estate.

The Rashtrapati Bhavan Club House, a heritage structure designed by Edward Lutyens, was also given a face-lift.