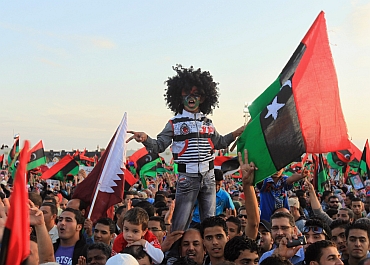 It's time New Delhi gives some clarity to its Libya policy so as to secure its energy and business interests in the north African nation, says Harsh V Pant

It was a violent end to a violent life. Former Libyan dictator Muammar Gaddafi was shot dead last week during an exchange of gunfire between his supporters and the rebel forces as he was being whisked away from a tunnel in a truck and with that an era came to an end.

The taking of Sirte and Gaddafi's death mark the climax of a war that was backed by an unprecedented North Atlantic Treaty Organisation air campaign aimed at protecting civilians. Gaddafi's death clears the way for the appointment of a temporary government to steer the country toward elections, and formal Libyan independence has been declared.

Though the United Nations has called for an investigation into Gaddafi's death, it is not a big issue for ordinary Libyans who are busy celebrating the end of a tortuous period in their nation's history.

With the fall of the Gaddafi regime, Libya has become the first case of regime change since the start of the popular unrest that broke out in the Arab world in January.

Gaddafi leaves behind an institution-less Libya 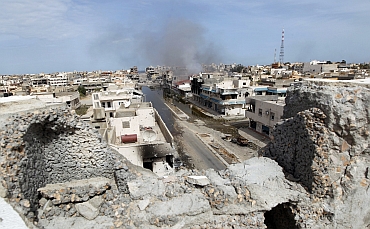 The elimination of Gaddafi reduces the chance of a prolonged insurgency against Libya's new authorities, who have pledged to create a liberal democracy and hold elections in eight months. But Libya today is a country with a huge quantity of dangerous weapons, lacking legitimate institutions or a civil society, and vulnerable to tribal, regional, sectarian and even racial rivalries.

After the American-led invasion of Iraq, Gaddafi had announced that Libya was abandoning its pursuit of weapons of mass destruction, including a covert nascent nuclear programme, ushering in a new era of relations with the West. But in Libya, he ruled through a smaller circle of advisers, including his sons, destroying any institution that might challenge him.

By the time he was done, Libya had no parliament, no unified military command, no political parties, no unions, no civil society and no non-governmental organisations. His ministries were hollow, with the notable exception of the state oil company. This might pose problems for Libya as it makes a transition towards a democratic political system.

Gaddafi's death comes as a breather for Obama 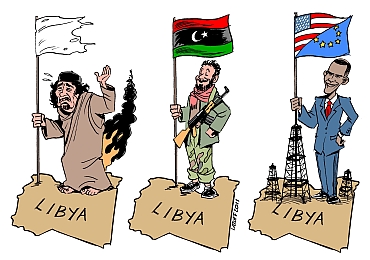 But on the positive side, the Libyan opposition has already created a transitional national council recognised by around 80 governments and it has prepared an ambitious but reasonable transition plan. Its leaders have now pledged to form a new administration after Gaddafi's downfall and not to serve in the future.

United States President Barack Obama was quick to take credit after Gaddafi's death. "Without putting a single US service member on the ground, we achieved our objectives," Obama has suggested.

After months of Republican criticism that his leadership has been lackadaisical and late in Libya and in the other uprisings of the Arab Spring, Obama has asserted that Gaddafi's demise "comes at a time when we see the strength of American leadership across the world."

"We've taken out Al Qaeda leaders, and we've put them on the path to defeat," he said. "We're winding down the war in Iraq and have begun a transition in Afghanistan. And now, working in Libya with friends and allies, we've demonstrated what collective action can achieve in the 21st century."

West likely to benefit most from Libya's oil output 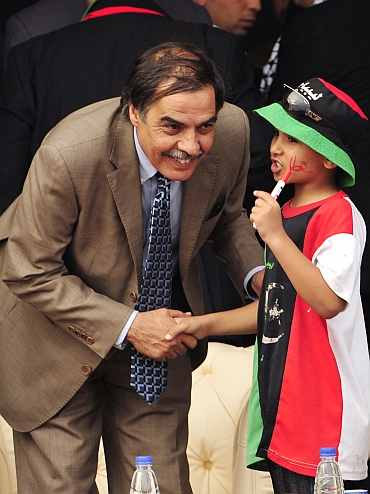 Global oil companies had already started operating in Libya even before Gaddafi's death. They have been getting acquainted with his successors and figuring out how to reboot the North African nation's oil sector. The country is already producing about 4,00,000 barrels a day, though most of that is going to domestic use.

The Western countries are likely to be the biggest beneficiaries. China's relations with the national transitional council were strained when it emerged that Chinese arms firms had been talking to Gaddafi's representatives about weapons sales.

Libya's interim council has promised rewards for those who took a leading role in backing the revolt against Gaddafi, raising concerns that China could be disadvantaged in the key energy sector. China is the world's second-biggest oil consumer and last year obtained three per cent of its imported crude from Libya. But Beijing has worked hard to bring its ties with the new Libyan government on an even keel. China's energy interests in Libya were not as great as those elsewhere but it wants to protect them. 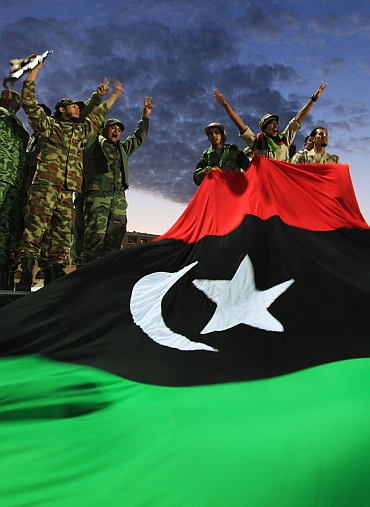 India also needs to show some diplomatic agility and use its old ties with Libya to renew its relationship with the new government. It was only in September that India decided to formally recognise the national transitional council and offered $1 million (Rs 4.8 crore) in aid through the United Nations.

Indian oil companies would be major beneficiaries if the oil sector in Africa's largest oil producer is liberalised. Major oil companies of India including ONGC Videsh, Bharat Heavy Electricals, Punj Lloyd, DS Construction, and Unitech all have operated in Libya before the war started. New opportunities await them in the new Libya.

India has already taken a long time in responding effectively to the unfolding situation in Libya. It's time New Delhi gives some clarity to its Libya policy so as to secure its energy and business interests.

India should seize the post-Gaddafi opportunity by making a generous offer to assist the new Libyan government with reconstruction and rehabilitation.