'The threshold of our patience has been reached' 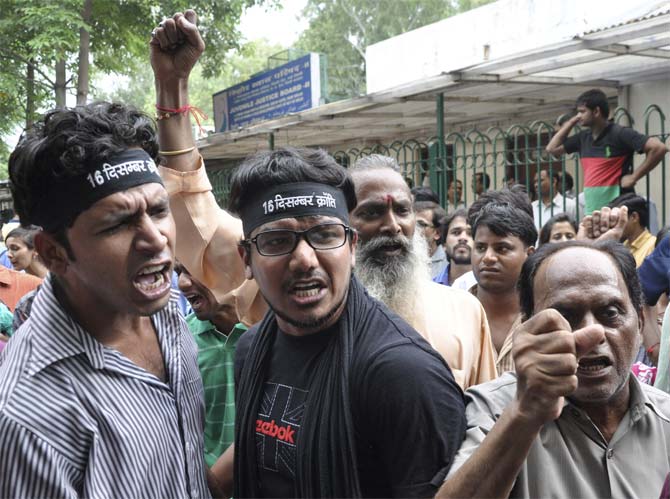 ‘...Let us acknowledge this and let us lead that change.

Even as we change, let us not forget to love the complexity of our country and revel in its multiculturalism. Let us not forget that we’ve always given space for the smallest voices and the tiniest murmurs and make space for disagreements,’ says writer-poet-ad guru Prasoon Joshi.

India is a work in progress. It struggles and continues to exist, even thrive.

We are unlike any other country, unlike the US or the UK or China where there is at least some semblance of uniformity. India on the other hand is like a civilisation where several cultures and belief systems co-exist.

We take a lot of pride in our diversity and celebrate it; no one thinks of dissolving this diversity into a single ideology.

We have good reason to be proud of this.

Even as we hail this diversity, we must also understand that this very diversity sometimes makes it difficult to head towards a common goal. So it would be terribly unfair to compare our nation’s progress with that of any other -- least of all the US or China -- like we so often do.

Instead of complaining, it is important that we be sensitive towards the diversity we celebrate and appreciate the way this country wants to grow.

Recently, at a press conference to promote Bhaag Milkha Bhaag, I was asked if the country had no success stories today that we had to turn to Milkha Singh. I replied saying I wasn’t writing about Milkha’s success as much as I was writing about his struggles.

To me struggles matter a lot more than material success. Surely winning a medal is success but the greater achievement in my mind is to be able to rise up and challenge the status quo. Which is what Mikha did; which is what India as a country continues to do every single day.

We are a country of many things but sadly we aren’t a country where the common man participates in governance.

A couplet by Saint Tulsidas that can be loosely translated thus comes to mind:

How does it make a difference to me

Who the king is?

What I find terribly sad is that the lines written centuries ago in a different context, society and time, ring true even today. We live in a democratic nation, where it SHOULD make a difference who the ruler is. Yet to the person on the street, it evidently doesn’t.

There is a huge section of the society that believes it doesn’t have a role to play in the shaping of India’s future. To them the country is a separate entity from their selves. This duality has to go.

We aren’t a country where change can trickle from top to bottom; we are country where real, sustainable change is the one that happens at the grassroots and spreads around.

It is time we acknowledge this change and in areas where it isn’t happening be the change we want to see. We cannot hide behind our traditions that we take so much pride in and not question the status quo.

The song I wrote for Prakash Jha’s Satyagraha reflects much of the sentiment in India:

(Lord) we asked you to grant us patience

But grant it to us no more

For we’ve tolerated so much

Give us the strength no more

The threshold of our patience has been reached. Let us acknowledge this and let us lead that change.

Even as we change, let us not forget to love the complexity of our country and revel in its multiculturalism. Let us not forget that we’ve always given space for the smallest voices and the tiniest murmurs and make space for disagreements.

Today, we may be following an economic model that is similar to the West in many ways. But we aren’t half as blatant about capitalism like the way they are. I say this, knowing fully well that opinion makers are criticising our consumerism.

While there is no denying that consumerism does exist, I feel that we will not be a culture that takes pride in saying ‘Greed is good’.

In India, songs about materialism will always have a tinge of sarcasm or mock irony to it -- the perfect example of it being the popular number ‘Sabse Bada Rupaiya’ from the film by the same name.

A song like (50 Cent’s) Get Rich or Die Trying can never be serious mainstream song in our country.

We are still in that phase where parameters of success are very different for us than the West. A lot of us view success differently and we still like to believe that success doesn’t mean material excess and that inner peace and satisfaction matter.

I hope we don’t ever forget these things.

Prasoon Joshi is a prolific writer and poet. He is one of India’s leading advertising gurus and an eminent lyricist and screenplay writer.

He spoke to Abhishek Mande Bhot.

Complete series: Why I love India