'If we work hard, we will be world beaters' 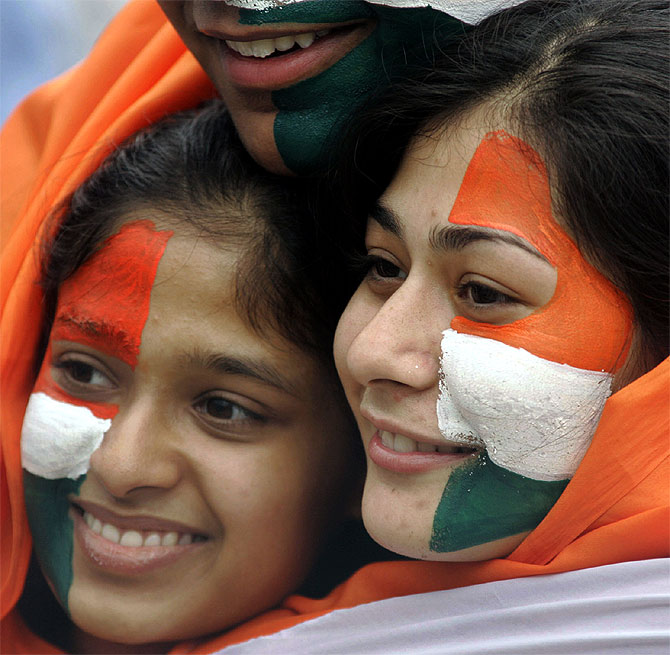 'I dream of a corruption-free India. Corruption is a cancer that has eaten up our vitals. Imagine if every paisa meant for development went for development,' says badminton champ P V Sindhu, the first Indian woman to win a bronze medal at the World Championships.

I love India because unlike the West we still bond with our family. Family bonding is always the most important factor in our lives. I love our culture, our discipline.

Here in India age is still a major factor in all fields. We respect our elders, we are taught to respect our elders by the way our parents treat our grandparents. We see young people running to get a chair for an adult, vacating their seats in a crowded bus or train. This is all because they have seen their elders behaving in a similar manner.

The elderly are well cared for in our country. Though many are not, but that is the exception and not the rule. Abroad there are plenty of homes for the aged. Here there are few and not in demand.

As a nation we have to work harder. Hard work should be the norm and not the exception. Look at Japan or Germany, they are far ahead of us not because of anything else but hard work. If we worked as hard as them, with our huge population we will be World beaters. The efficiency and productivity of the workers in these countries should be studied and copied.

The second thing we have to learn is discipline. We have to follow the law, we have to pay our taxes, we have to stand in line irrespective of how crowded the bus or train is. We should not cut lanes or break traffic signals or rules.

Discipline pays dividends. There will be less accidents and the government will be more inclined to deliver services when the public is disciplined.

Only if they know that they will be held accountable will they function properly and the nation will progress.

Corruption is a cancer that has eaten up our vitals. We have to get rid of it totally. We have to pull it out by the roots only then will our future generation wake up to a new India.

To make girls more independent we have to give them the best education possible and financial help after that to make them realise their dreams.

Sports is a great equaliser in our society which is divided by too many lines and walls. Here too, women should get equal opportunity, equal attention, and the same training facilities and money that is available to men.

By winning the bronze at the World Championships in August, P V Sindhu became the second Indian since Prakash Padukone to win a singles badminton medal at the event. Padukone won the men's singles bronze in 1983.

The 18-year-old was presented with the Arjuna Award last week.

She shared her views over e-mail with A Ganesh Nadar.