Sign in  |  Create a Rediffmail account
Rediff.com  » News » Filmmaker Imtiaz Ali on what fascinates him about India

Filmmaker Imtiaz Ali on what fascinates him about India 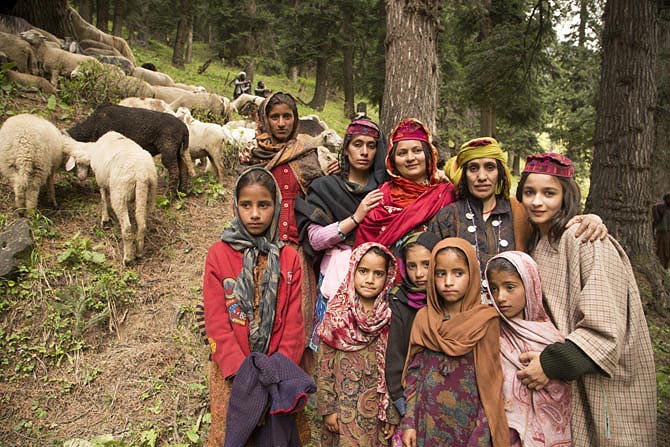 Image: Actress Alia Bhatt with local women during the filming of Highway in Kashmir.
Imtiaz Ali

'In Kaza, Himachal Pradesh, the winter population is only around 70 to 75 people because the residents move to places that are not as cold...'

'Kashmir is so multi-textured...'

'Punjab has suffered most after Partition -- the richness of the area was taken away...'

Filmmaker Imtiaz Ali on the experiences, thrills and learnings that his travels through India have brought him.

I am very fascinated about travelling in India. It is only when you are closer to home that you see things you feel in your bones. I don't want to ignore that. I feel we have a very rich heritage.

For my upcoming film, we went into the extreme conditions of Kaza and Tabo in Himachal Pradesh.

In the winter, the residents go away to less cold places and they travel everywhere.

We think only Kashmiris live in Kashmir, but this time I got a chance to travel a lot in Kashmir.

I went to different places and saw there are so many people speaking so many different languages. It is so multi-textured.

There are various kinds of divides that have been swept aside because of evident geographical regions.

While shooting Highway, I realised how Punjab has suffered most after Partition -- the richness of the area was taken away. Cities that were connected to Lahore just dried up.

The areas where we filmed in Ferozepur, Faridkot, Makhu etc -- have become the poorest parts of Punjab whereas they were the richest parts of the state once upon a time.

There are houses, bungalows which were very rich before Partition, now all those people have floundered. They had suffered a lot.

What fascinates me about India -- or rather northern India -- is that every 20 kilometers, the language, dialect, music, food, clothes... everything changes.

He spoke to Patcy N.