The two places all Indians must go to 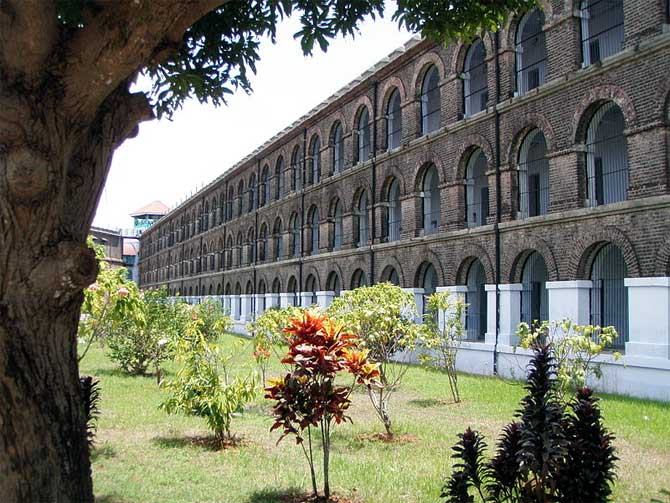 Image: The Cellular Jail where many freedom fighters were imprisoned by the British.
Photographs: Biswarup Ganguly/Wikicommons

The Andaman & Nicobar Islands was called 'Kala Pani'. Prisoners from India’s First War of Independence (1857) were deported to Andaman & Nicobar Islands. There are two places on these islands that are like a pilgrimage for all Indians. One is Viper Island [before Cellular Jail was constructed, the British imprisoned and tortured Indian freedom fighters in a jail on Viper Island] and the other is the Cellular Jail in Port Blair. These two places inspired me to become a true Indian and love my country.

The Andaman & Nicobar Islands has the distinction of having the Indian national flag of the Azad Hind Sena unfurled by one of the greatest Indian revolutionaries and freedom fighters, Netaji Subhas Chandra Bose on December 31, 1943.

At that time the total population of Andaman & Nicobar Islands was less than 5,000 but these people contributed Rs 15,000 to help Netaji fight against the British. Rs 3 per person at that time was not a small amount at all but the people of the island sold whatever they could to show their patriotism and love for the land of their birth.

The first thing that all Indians must know about the Andaman & Nicobar Islands is that it is a mini India. There are no divisions or infighting based on caste, creed or religion.

I think the Andaman & Nicobar Islands is the only place in India where people don’t fight about regionalism, casteism or communalism. If we have Durga Puja on the island, we get a Muslim president for the committee who takes the lead in organising the festival.

He will eat prasad distributed during the puja and even wholeheartedly sport vermilion on his forehead. We all come together and celebrate all social and religious functions. In the true sense of the word, the people of Andaman & Nicobar Islands represent the spirit of true brotherhood.

There are so many temples on the island for which land was donated by our Muslim brothers and sisters.

I can vouch for myself and say this that out of 543 MPs in the Lok Sabha, I am the most honest. I have always been in touch with India’s grassroots. All political leaders of India must take a pledge to root out the evils of corruption from this country. Every political leader must introspect as to whether they are being true to India’s Constitution and then to the constitution of their own parties.

I pledge today that I will make efforts to get all the elected lawmakers of this country to Andaman & Nicobar Islands for a two-day pilgrimage and especially take them for a tour of Viper Island and Cellular Jail. This might, if at all, inspire all of us to once again strive for the betterment of the country and make this country once again the ‘Sone ki Chidiya’.

Everybody must pledge to think of their nation as their own home and strive for the upliftment of India’s society. For this to happen it is very important that all the leaders visit these two places to learn and realise the sacrifices made by our forefathers for the sake of this great nation.

I have always made efforts to do better for my country. In my speeches in Lok Sabha I have always spoken about how MPs when they get elected to the Lok Sabha come with a bank balance of just a few thousand and when their term ends they are worth a few crore rupees. How does this happen? This should be a matter of concern for all of us.

We should all pledge to become public servants.

India’s aam aadmi is very simple. His demand is very simple. There is strong perception among the common men and women that their elected representatives are not fulfilling their duties and responsibilities towards their voters.

After former Prime Minister Atal Behari Vajpayee, Gujarat Chief Minister Narendra Modi has emerged as a great Vikas Purush in India. He may be a junior in the party but through his honesty, straight-forwardness and hard work for development, he will show to the whole world what kind of development India is capable of.

Just like Subhas Chandra Bose and Mahatma Gandhi, he will make the whole world take notice of India.

I am fully confident that we will create a New India under Narendra Modi’s leadership.

Bishnu Pada Ray, is the two-time BJP MP from the Andaman and Nicobar Islands.