Sign in  |  Create a Rediffmail account
Rediff.com  » News » Arshad Warsi: 'We are a country with a solid backbone'

Arshad Warsi: 'We are a country with a solid backbone' 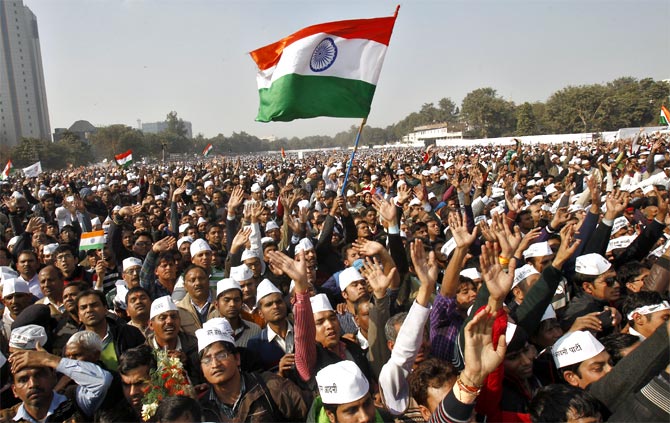 'India is like a world in itself. The sad part is that that the bad things overshadow the good,' says actor Arshad Warsi in our special series where well-known Indians speak about the India they adore and dislike.

I like the fact that India has a beautiful history. We are one country which has a solid backbone.

India is a multi-faceted country. We are the only country in the world with so many languages, cultures, cuisines. After every 100 kilometres, the landscape changes, people change.

India is like a melting pot of cultures and that is what makes it so unique.

The sad part is that that the bad things overshadow the good things of our country. There are a lot of changes that I would like to see. We really need to come out with fresh laws.

Our law system is outdated. They are beneficial for politicians, but not for the common man.

Today every politician takes the law for granted and uses it for his own benefit. Politicians don't want to change laws as they will lose out on a lot of benefits.

Our taxation system also needs to change. We have a fraction of people paying taxes for around 1.2 billion people. It is not fair at all.

This is the reason that people today are stressed out and are paying around 30 per cent tax.

Even if half the country starts paying tax properly, the taxes will come down by five to 10 per cent and everyone will have a better life. All the illegal practices will reduce.

I feel the freedom of speech in this country is a myth. Today India has become a regressive country.

Our currency today is competing with the currency of countries like Pakistan and Bangladesh. It is not possible. We are way above these countries in almost every field.

Right from the best medical facilities to having a Silicon Valley, to making maximum movies in the world, India has everything that the world wants; how can our currency be so weak?

It is just that all the money is going to the politicians. It is going in their pockets. There are a lot of things to change.

His film Mr Joe B Carvalho opens January 3 while Dedh Ishqiya will release next week.

He spoke to Sonil Dedhia.