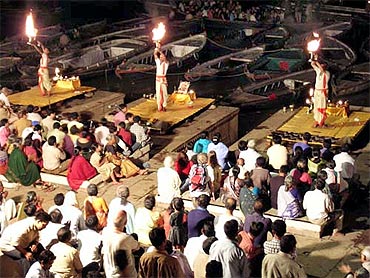 Rediff.com celebrates Independence Day 2011 with a special series: The India You Didn't Know.

Writer Sivasankari begins the series, looking back at a spectacular Indian ritual that dates back a thousand years.

What I experienced put me in a time capsule and sent me back a thousand years. I am told the same tradition has been followed there for a 1000 years. It is a marvel. I recommend that everyone should go and watch the aarti performed at the Dashashwamedh ghat at least once in their lifetime.

The boatman took us to a point opposite the ghat at a distance of about 100 feet. Seven decorated podiums were put up on the banks of the Ganga and seven priests stood on each stage with various musical instruments being played in the background to hymns and bhajans.

Under the starlit sky with hundreds of lamps floating in the river, I was spellbound watching the aarti. All those Indians who dream of visiting Venice must visit this place and enjoy the beauty of this tradition.

'The Manikarnika ghat experience will remain with me' 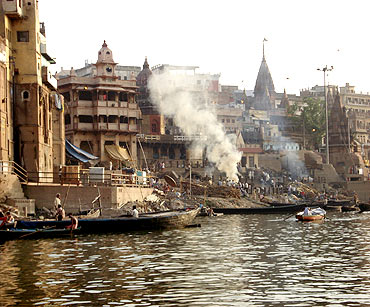 I also would like to mention the Manikarnika ghat where I spent an evening.

Manikarnika is the foremost among the cremation ghats in Kashi. The guide took us to the Manikarnika ghat just before sunset and left us, saying that he would be back soon.

On the banks of the Ganga, there were bodies lying in queue to be cremated, and I didn't see any family member crying. It gives you a new concept about death.

We spent an hour watching the bodies being cremated. They (the attendants) first picked up two bodies, dipped them in the Ganga, put them on the pyre and set it ablaze. Within a matter of minutes, they moved to another body. The family members watched nonchalantly; the usual wailing, grieving was remarkably absent.

The Manikarnika experience will also remain with me for a lifetime. It made me look at life and death from a different perspective. From that moment, I am not scared of death.

There, death is moksha and there is nothing to be scared of.

Please click on More for filmmaker Zoya Akhtar's take on the India You Didn't Know.