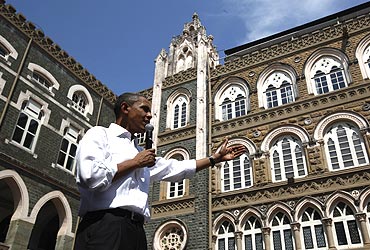 United States President Barack Obama on Sunday made it clear that the US 'cannot impose' itself on India-Pakistan relations and called for a 'military response' in a 'significant ongoing way' against those who perpetrated terror attacks in Mumbai and New York.

Obama avoided any reference to Kashmir but, endorsing India's stand, said that less contentious issues should be taken up first in an Indo-Pak dialogue process.

India has been persistently suggesting to Pakistan that less contentious issues could be taken up for bilateral talks before the two countries move on to discussing thorny issues like Kashmir.

'Some elements in Pakistan are affiliated with the Taliban' 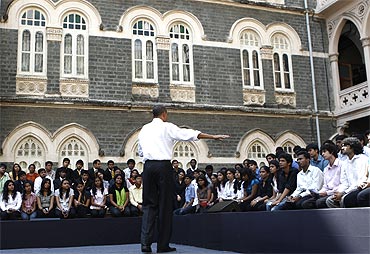 Interacting with students of St Xavier's College in Mumbai in a typical US town-hall style meeting for nearly an hour, Obama expressed hope that over time, trust develops between India and Pakistan and dialogue begins, perhaps on "less controversial issues building up to more controversial issues".

He said the progress made by Pakistan in fighting terrorism was not quick as "we would like" and asserted that they were working with Islamabad to eradicate extremism which is a cancer that has the potential to engulf the entire country.

"There are going to be some elements in Pakistan that are affiliated with the Taliban, the Al Qaeda and the Lashkar-e-Tayiba. These are the organisations, these extremists, they are irreconcilable. They will be there and there will need to be a military response to those who would perpetrate the kind of violence we saw here in Mumbai in a significant, ongoing way, the kind we saw in 9/11 in New York city," he said.

'India and Pakistan can live side by side' 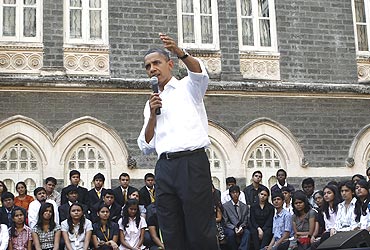 Obama also observed that it would surprise Indians when he says that it is in India's interest that Pakistan remains "peaceful, stable and prosperous"

The US President made these comments when a student asked why Pakistan was not being declared a terrorist state by the US. Obama reacted that it was a good question and said, "I must admit that I was expecting it".

"India and Pakistan can prosper and live side by side; this will not happen tomorrow but needs to be the ultimate goal. The US can be a partner but cannot impose this process. India and Pakistan have their own understanding," he said.

'Pakistan is strategically important to the United States' 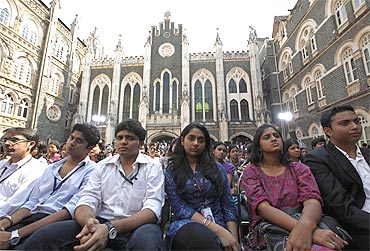 Obama admitted that Pakistan's progress in stamping out terror is slow, and added that it is not acting as quick as desired.

"There are elements of terror in it. We will work with the Pakistani government to eradicate extremists. Pakistan's progress on stamping out terror is slow. The problem of extremism must be addressed. An unstable Pakistan is bad news," said President Obama.

"Pakistan is an enormous country with enormous potential. Pakistan is strategically important to the United States and a trust must develop between India and Pakistan. India has the biggest stake in a stable Pakistan," he added, when asked why Pakistan is such a great ally of the US.

Commenting on America's Afghanistan policy, the US President said a stable Afghanistan is necessary.

"We can't withdraw troops from Afghanistan. We need to follow the Iraqi model in Afghanistan. Pakistan must also be patient," he added. 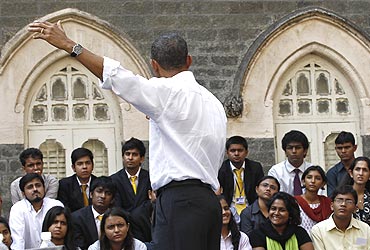 Obama also said the partnership between India and the United States is indispensable in the 21st century, adding that the two nations share same values and interests.

"India and the US share common values of belief, dignity and self determination. The two nations have great potential to improve," said President Obama.

"We have seen the resilience of the Indian people. India is not a rising power, but it has already risen. Half of India's population is within 30 years. That is amazing," he added.

When questioned about Jihad, President Obama said, "Islam in the hands of extremists has been distorting. We must treat all religions at par. It is a challenge to isolate extremists. Islam is a great religion; over a million people practice it."

'We must learn to observe faith without violence' 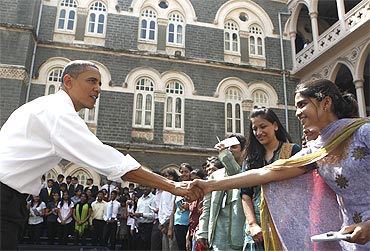 "One of the challenges we face is how do we isolate those who have these distorted notions of religious war," he said as he spoke of the need to fundamentally reject the notion that "violence is the way to mediate our differences".

The President said the existence of diverse religious beliefs was a 'major challenge' not only in India but also around the world.

"We can learn to treat each other with respect and dignity. We must learn to observe faith without violence. There is a need to imbibe Gandhian (philosophy)," he added.

Talking about spirituality, the US President said economic growth and development can liberate people.

"Healthy materialism is needed for modern development. Public services can be frustrating but necessary," he said. 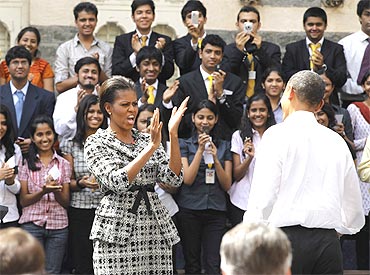 Further talking about how Gandhian principles can be implemented, President Obama said Mahatma Gandhi is a great example for all of us.

"I want to take Gandhian principles forward and I do my best to follow Gandhi. His ideas help realise our potential. We can't ignore the hardships faced by others," he added.

When asked about change, President Obama said the United States has gone through the toughest two years and suffered economically.

"It requires me to make mid term corrections. India is critical in our economic partnership. India is a competitor. US always want rest of the world on our own terms. We need to compete on equal terms," he claimed.