'Devastating fires a long way from being under control' 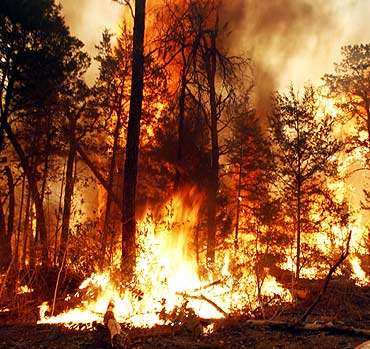 Massive wildfires have killed two persons and destroyed at least 1,000 homes in Central Texas as the United States firefighters battled some of the worst blazes in the state's history.

Governor Rick Perry, who cut short a presidential campaign trip to South Carolina on Monday to return to help oversee firefighting efforts in Texas, said at a news conference that the fires were "a long way" from being under control and described the effect on people who had lost their homes as "devastating."

Texas Forest Service spokeswoman Victoria Koenig said it is too early to say how much progress was made fighting the wildfire in Bastrop County overnight, but that there were no winds early yesterday. The fire enveloped at least 25,000 acres Monday. 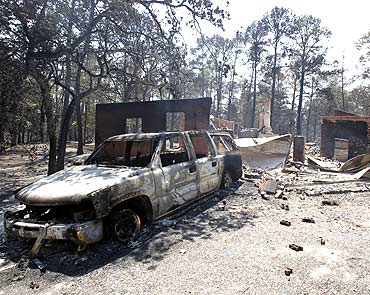 "It's encouraging we don't have winds right now, not like yesterday," Koenig said early on Tuesday morning.

Even with the encouraging conditions, Koenig said it was a "tough, tough fire" that was raging through rugged terrain, including a ridge of hills.

"You can still see the hills glowing quite a bit," she said. At least 5,000 people were forced from their homes in

Bastrop County about 25 miles east of Austin, the state capital, and about 400 were in emergency shelters, officials said Monday. 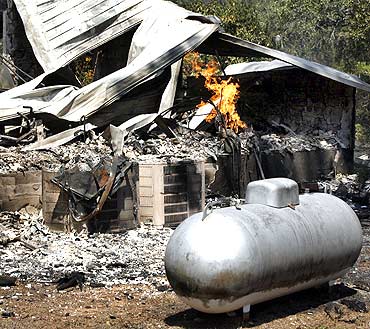 School and school-related activities were cancelled on Tuesday.

Official reports said that about 8,000 people have been evacuated from their homes in the Magnolia area in Montgomery County.

At least 80 homes and one fire truck have burned, officials said.

Governor Perry said that more than 50 large fires were burning across the state yesterday, up from "somewhere in the 30s' the previous day.

This number included only those blazes being dealt with by federal and state authorities, not "numerous" smaller fires handled by local fire departments, he added. 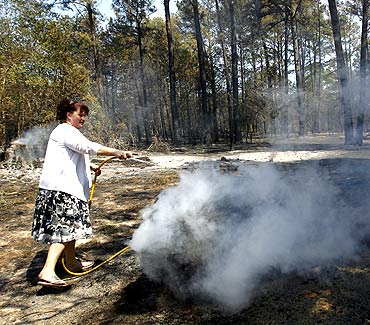 "For those families who have lost everything they had, homes, possessions etc, it has been devastating for them," Perry said.

"We're getting our people out of the way of these fires. And that's the most important thing. Obviously we'll be dealing with the tragedy here for some time to come," he said.

Some residents said they were surprised by how quickly the blaze engulfed their neighbourhoods.

"We were watching TV and my brother-in-law said to come and see this," Dave Wilhelm, 38, who lives just east of Bastrop said. "All I saw was a fireball and some smoke. All of a sudden: Boom! We looked up and left." 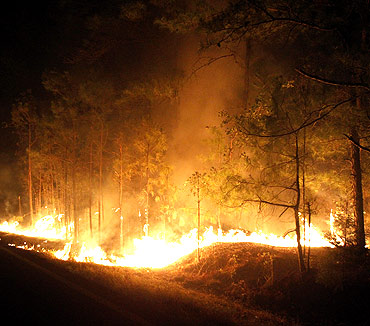 Wilhelm returned on Tuesday to find his neighbour's house and three vehicles gone, some of his own children's backyard toys destroyed but their house spared.

"Some stuff is smoldering on the lot behind us. Inside of the house, we smell like a campfire. We're definitely very lucky."

Texas has been facing one of its worst wildfire seasons ever. Since December last year, 20,900 fires have been reported and more than 1,000 homes burned, 700 of them in the past week.