The average score on the 2012 index, prepared in collaboration between the Foreign Policy and Fund For Peace, has remained more or less steady from year to year.

Somalia continues to top the 'Failed States Index' like it has for the past five years. 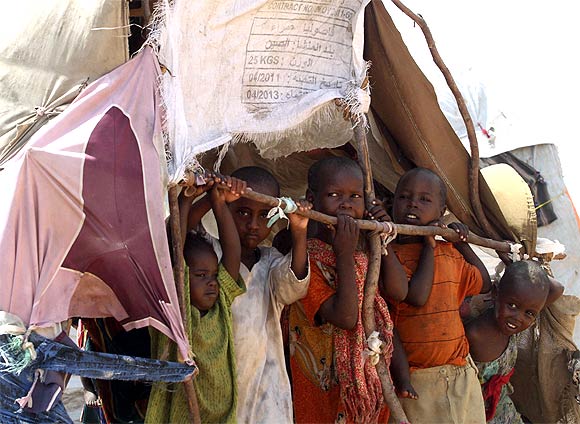 Image: Internally displaced children stand inside their makeshift shelter at a camp in the Hodan district of Somalia's capital Mogadishu
Photographs: Feisal Omar/Reuters

Somalia ranks number one in the 'Failed States Index'.

Since the outbreak of the Somali civil war in 1991 there has been no central government control over most of the country's territory. The country has topped the 'Failed States Index' for five years straight.

Last year, one of the deadliest droughts in decades resulted in a famine that killed tens of thousands of people and displaced hundreds of thousands in the country, where 16 per cent of the population was internally displaced in 2011 -- the highest rate worldwide, reports Foreign Policy magazine. 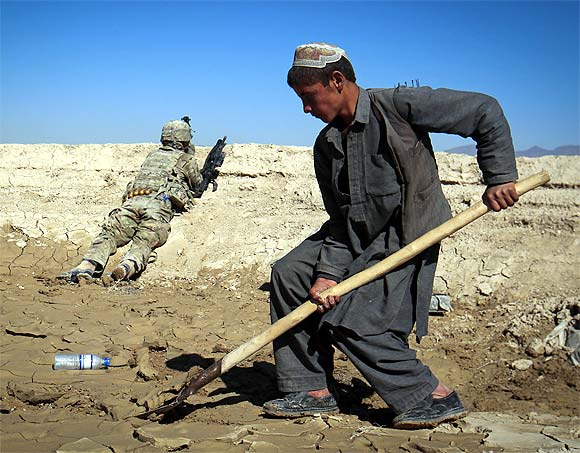 According to Foreign Policy magazine, Afghanistan unquestionably checks just about every box for state failure.  Afghanistan is also dubbed as the world's most hostile country for women.

The decades of war has made Afghanistan the world's most dangerous country. Terrorist groups such as the Haqqani Network and Habit Islami are actively involved in a nationwide Taliban-led insurgency, which includes hundreds of assassinations and suicide attacks.

According to the United Nations, the insurgents were responsible for 75 per cent of civilian casualties in 2010 and 80 per cent in 2011. A 7.0 magnitude earthquake struck Haiti on 12 January 2010, and devastated Port-au-Prince. The presidential palace, parliament and many other important structures were destroyed, along with countless homes and businesses, leaving hundreds of thousands of people homeless.

Social, economic, and political unrest, paired with the the country's enduring image as a disaster zone, have so far stymied the return of vacationers, says Foreign Policy. 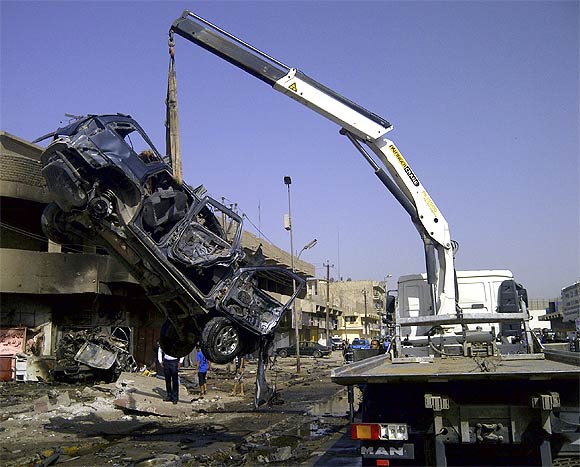 Image: A burnt vehicle is removed from the site of a bomb attack, which killed Shi'ite pilgrims who were making their way to a religious festival, in Baghdad
Photographs: Saad Shalash/Reuters

After an invasion led by American and British forces, Iraq came under a military occupation by a multinational coalition. Sovereignty was transferred to the Iraqi Interim Government in June 2004.

Although overall levels of violence in Iraq have declined substantially from the peak of sectarian strife in 2006-2007 deadly bombings and shootings have repeatedly undermined security in the country, reports Foreign Policy. 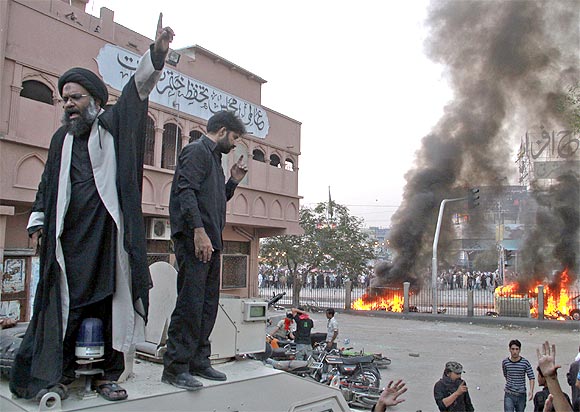 Image: A Shi'ite cleric speaks to protesters after clashes between two religious sects of Islam in Karachi
Photographs: Majid Hussain/Reuters

The civilian government was further marginalised by the military following the bin Laden raid, culminating in the dramatic firing of the country's ambassador to Washington after he reportedly warned of a possible "coup", says Foreign Policy magazine.

The country also faced grave challenges on a number of other fronts, including assassinations, political intrigue, and natural disasters. Punjab Governor Salman Taseer, an outspoken opponent of a controversial blasphemy law, was killed in January 2011. And targeted killings between rival political factions left hundreds dead in Karachi throughout the summer, says the report. 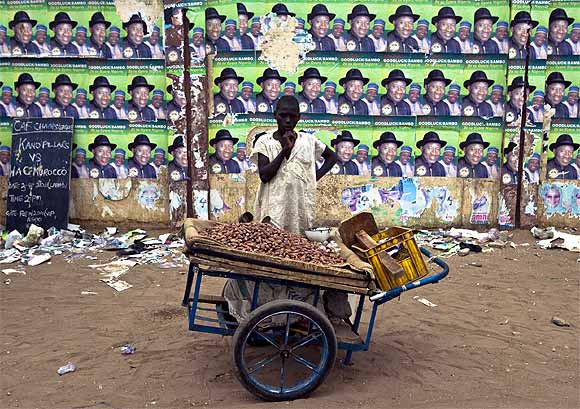 Image: A boy selling nuts in a cart, waits for customers near a wall with election posters of Nigeria's President Goodluck Jonathan and Vice President Namadi Sambo, in the northern city of Kano.
Photographs: Joe Penney/Reuters

Violent protests in the country highlight the deep ethnic, regional, and religious divisions in Africa's most populous country. In April 2011, Goodluck Jonathan, a Christian from Nigeria's southern, oil-producing Niger Delta, resoundingly won what was arguably the country's fairest. But he was immediately confronted with protests.

Brazen attacks on everything from churches to the U.N.'s headquarters in Abuja coincided with mass protests across the country over the removal of fuel subsidies -- an action the government later walked, says Foreign Policy. Image: A Free Burma Coalition-Philippines protester raises a clenched fist in front of a placard during a rally in front of the Myanmar embassy in Makati's financial district of Manila
Photographs: Romeo Ranoco/Reuters

Although it has been under military rule since the 1960s, Myanmar is a rarity on the Failed States Index: a country showing strong, measurable signs of progress. Since his election in March 2011, President Thein Sein has freed hundreds of political prisoners, taken steps to open up the economy and lift restrictions on the press, and allowed a somewhat democratic vote in March that saw the election of longtime opposition leader Aung San Suu Kyi to parliament, reports Foreign Policy.

However, widespread poverty and violence are serious obstacles that remain. Image: A rocket is carried by a military vehicle during a military parade to celebrate the centenary of the birth of Kim Il-sung in Pyongyang
Photographs: Bobby Yip/Reuters

North Korea is one of the world's most militarised countries. Many outside organisations describe North Korea as a totalitarian, Stalinist dictatorship with an elaborate cult of personality around the Kim family.

For all its horrors, North Korea refuses to collapse. It survived the disintegration of its patron, the Soviet Union, in 1991; the death of its founder and dictator for 46 years, Kim Il Sung, in 1994; and the world's worst famine in decades, which led to the starvation of hundreds of thousands of people, says Foreign Policy.

In the world's most opaque country, information is scarce, but it appears that the North, desperately poor and inhumanly repressive, still has enough inertia to keep muddling through, says the report. 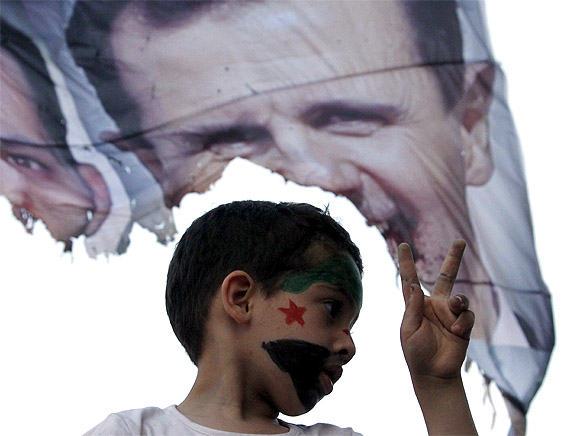 Image: A child with the Syrian opposition flag painted on his face shows the victory sign in front of a burnt picture of Syrian President Bashar al-Assad during a demonstration against the Syrian and Russian governments
Photographs: Ali Hashisho/Reuters

Syria is in the throes of a debilitating uprising that began as peaceful anti-government protests in March 2011 and now features a (semi-)organised opposition, an armed rebellion, and signs that terrorist groups are exploiting the chaos. The United Nations estimates that more than 10,000 people have died during the government's relentless crackdown on the opposition, reports Foreign Policy. 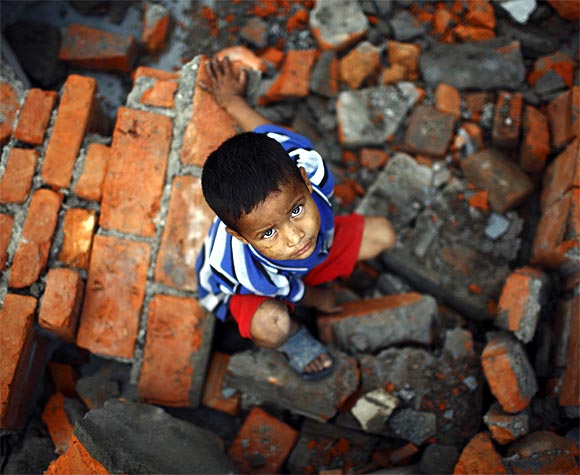 Image: A boy looks towards the camera as he searches for his belongings at the rubble where his house used to stand, at the slum settlement near the bank of Bagmati River
Photographs: Navesh Chitrakar/Reuters

Sandwiched between India and China, impoverished, mountainous Nepal has long been a proxy battleground for influence among those powers, often cracking down on Tibetan refugees at the behest of its neighbor to the north. Nepal's biggest problem is that it just can't seem to form a government, reports Foreign Policy.

Nepal remains one of the poorest countries in Asia. Politics in Bangladesh have long been dominated by a bitter rivalry between Prime Minister Sheikh Hasina and former Prime Minister Khaleda Zia, and the resulting political volatility has manifested itself in many ways in this impoverished, densely populated South Asian country.

The army recently announced it had foiled a coup plot by Islamist military officers against Hasina's government, and deadly protests and general strikes over the disappearance of an opposition leader paralysed the country, reports Foreign Policy. 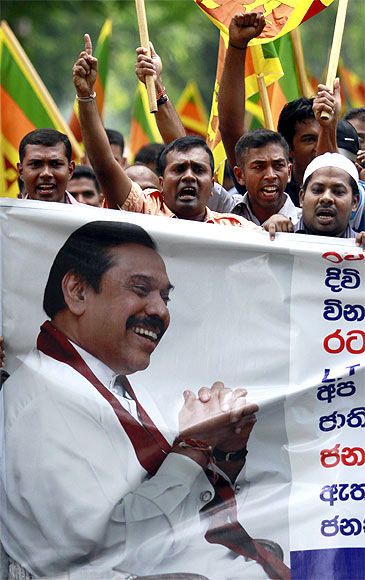 Image: A demonstrator holds up an image of Sri Lanka's president Mahinda Rajapaksa in front of the United Nations (UN) head office during a protest in Colombo
Photographs: Dinuka Liyanawatte/Reuters

Ethnic tensions between the majority Sinhalese and the minority Tamils, supported by India, still rankle. The government of President Mahinda Rajapakse, a Sinhalese, has claimed that it "never targeted innocent civilians," but human rights groups estimate that tens of thousands of civilians were killed in the brutal last few months of fighting, says the Foreign Policy report. 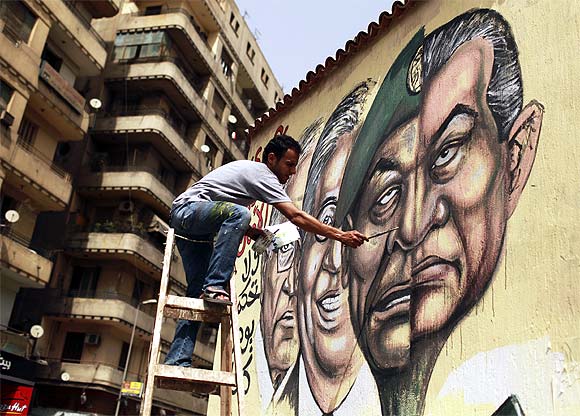 Egypt was at the forefront of the Arab Spring as a popular protest movement ended 30 years of autocratic rule by former President Hosni Mubarak. Today, Mubarak has been sentenced to life in prison for his role in the deaths of protesters during the movement, and Egypt recently completed the first free elections in the country's history.

But these rosy developments are far from the whole story. The elections led to what many revolutionaries have called a "nightmare scenario": a runoff between Ahmed Shafiq, Mubarak's last prime minister, and Mohammed Morsi, a member of the Islamist group Muslim Brotherhood -- hardly a choice the liberal protest organizers welcome, the Foreign Policy report says. 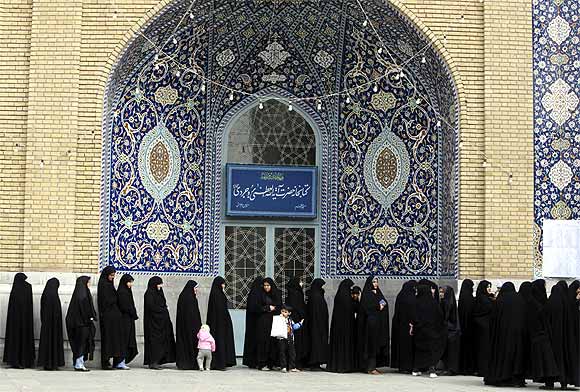 Image: Women stand in line to cast their votes during the parliamentary election, in the court yard of the holy shrine in Qom
Photographs: Reuters

The West's tough sanctions over the country's nuclear program have inflicted much of the country's economic pain this year. (In fact, the International Monetary Fund raised eyebrows in 2011 by praising Iran's economic reforms in a report.) But inflation and high unemployment were already present last year, and human rights abuses and political infighting added to domestic instability. 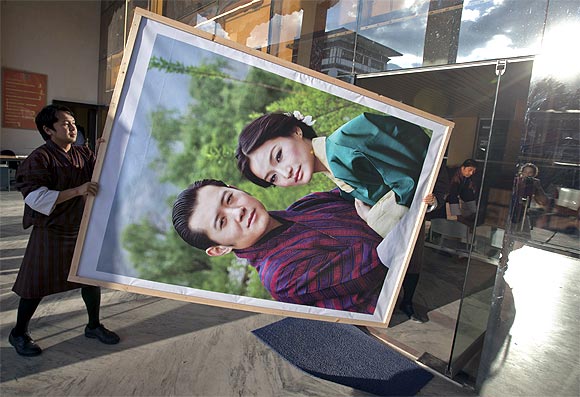 Bhutan's fourth "dragon king" coined the term "gross national happiness" in 1972 as the priority for his small, isolated Himalayan kingdom, and PBS ran a documentary about the country, calling it "The Last Shangri-La."

But all this happy talk masks an authoritarian streak: Bhutanese are reportedly required to wear their national dress outside during daylight hours, cigarettes are illegal, and tens of thousands of ethnic Nepali Bhutanese citizens have fled to Nepal because of persecution, reports the Foreign Policy magazine.