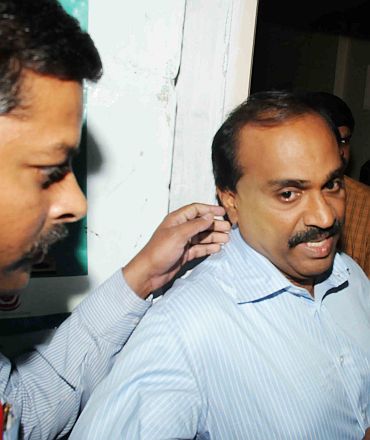 A 10-member Central Bureau of Investigation team conducted a raid at his residence and arrested Janardhana Reddy and his brother-in-law Srinivas Reddy.

In the evening, the Reddys were produced in the CBI court. While rejecting Janardhana Reddy's bail plea, the court remanded him to 14-day custody for further questioning on his alleged role in the illegal mining operations in Obulapuram mining company in Andhra Pradesh.

Obulapuram Mining Company MD Srinivas Reddy too was sent to 14-day custody. The legal team of Reddy is planning on moving the Andhra Pradesh High Court against this order.

Janardhana Reddy, in his defence, said that this was nothing but witch-hunting by his political rivals. He said that the CBI had exceeded its jurisdiction and added that the matter was already before the Supreme Court. He said he had and will continue to cooperate with the investigation.

His legal team, comprising 11 advocates, said that when the matter was seized off by the Supreme Court it was unfair for the CBI to carry out this arrest. The CBI, on the other hand, said that the entire operation had the green signal of the court and they were only going about their job of carrying out their investigation.

They further said that there is crucial evidence against Janardhana Reddy and also added that if the accused is let off then there is every chance of him tampering with the evidence. They also told the court that they had registered the case on the basis of various offences and had also carried out seizures, which included documents, cash, gold, bank documents, fancy cars, a high-tech bus and a chopper. 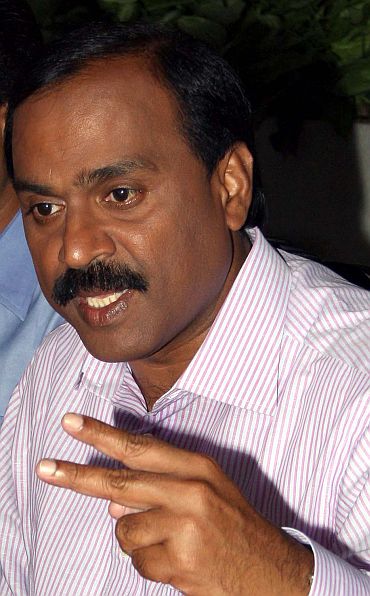 Lakshmi Narayan, director general of police, CBI said that the duo are being treated as accused for for various offenses under the Indian Penal Code and the Forest Act. "We will investigate the matter and prepare a detailed report. We will seek their custody for questioning their alleged role in the illegal mining operations in Obulapuram mining company in Andhra Pradesh," he added.

After the arrest, the CBI raids continued in Bengaluru and Bellary and they seized Rs 3.5 crore in cash and also 30 kg of gold. The CBI also seized Rs 1.5 crore cash from the residence of Srinivas Reddy.Janardhana Reddy's chopper has also been confiscated by the probe agency. In addition to this, they have also secured several records relating to the mining company.

The CBI is also questioning Janardhan Reddy's wife in Bellary, the sources said.

Raids were conducted in the apartment belonging to the Reddy brothers in Bengaluru. The CBI is now trying to gain access one of the rooms, but have not found the keys as yet. They have sought the help of the local police now to open this door.

The Reddy brothers say that the raids are a witch-hunt planned by the Congress. "The Congress first targeted Jaganmohan Reddy and now us."

"We have done nothing wrong and this is nothing but political vendetta," they also added.

The CBI team from Hyderabad entered Reddy's house at around midnight and escorted him to an undisclosed location for questioning, said sources. Srinivas Reddy, the managing director of Obulapuram Mining Corporation, which is owned by the former minister, was also questioned.

The probe agency's action comes a day after Reddy's associate and former Karnataka minister B Sreeramulu resigned from his Assembly seat, protesting against the Bharatiya Janata Party's denial to give him ministerial berth and also keeping Bellary Reddy brothers out of the ministry. 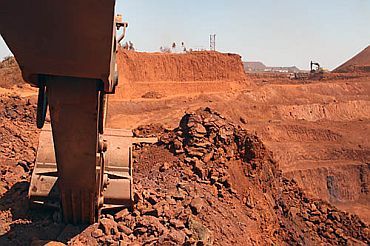 An inquiry was ordered in the illegal mining operations by K Rosaiah, when he was the chief minister and following a probe the raid was conducted.

Officials from the CBI were not available for comment. Legal representatives of the Reddy brothers -- G Karunakara Reddy, G Janardhana Reddy, G Somashekara Reddy said they would pursue legal action, but did not comment further.

There are allegations of irregularities in the mining activities of OMC which is owned by brothers.