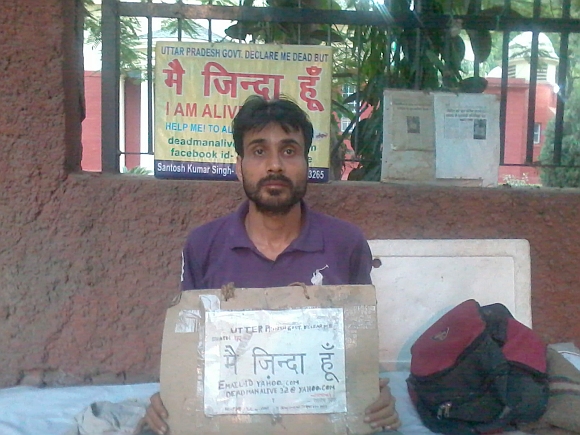 What would you do if you have been declared dead in government records and your ancestral property worth a few crores has been confiscated by your closest relatives?

Well, among other things, you could run for Presidential elections.

For 32-year-old Santosh Kumar Singh, this seemed to be the only option left to prove that he is alive.  Priyanka reports from New Delhi.

The Varanasi resident alleges that his close relatives first declared him missing, and later dead, in order to gain possession of his share of ancestral property. To add to his woes, official records too, pronounced him dead.

He has been running from pillar to post, to government offices and police stations to prove that he is alive and the land be duly returned to him.

"I filed my nomination to run for the Presidential elections on Thursday," he says. "And I am only doing this so everyone knows that I am alive," he adds.

Santosh, who belongs to a Thakur family, lost his parents when he was a 12-year-old. He spent most of his childhood with his uncles in his village near Varanasi.

He remembers little about his early childhood, but vividly recalls his chance meet with film actor Nana Patekar when he was 20, in 2000.

Patekar, with fellow actors Paresh Rawal and Ayesha Jhulka had visited his village for the shooting of the film 'Aanch.' The shooting schedule lasted for 42 days, and while other actors stayed in the city, Patekar chose to stay in the same house for the entire duration.

'Officials gave me my own death certificate' 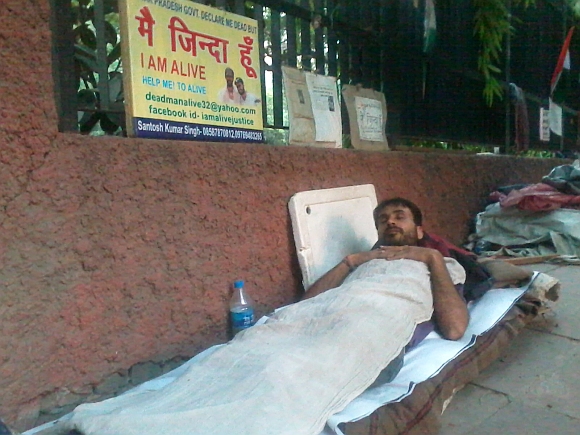 Two years later, Santosh met his future wife Supriya on a visit to Shirdi.  "We fell in love and got married the next year," he says. However, his family members and others were strongly opposed to his marriage to Supriya, who belonged to a Maharashtraian Harijan family.

The couple visited their village but could not calm or convince his relatives. Santosh alleges that he found out later that his relatives had filed an affidavit in the court in 2003, stating he had gone missing.

A few advertisements were published in local newspapers, and in due time, government authorities declared Santosh dead in their official records, transferring his ancestral property to his relatives, he alleges.

"They also gave me my own death certificate," he says with a wry smile.

Since 2004, Santosh has been fighting the legal battle in a lower court in Varanasi. He has been protesting on the streets of Delhi since January this year. His wife and five-year-old son live in Mumbai.

"I am alive. This is my struggle to prove that I exist," he says, but adds that he is now becoming frustrated over the laxity with which the government is handling the issue.

"Finally, I decided that I will file my nomination for the Presidential election," he says.  Santosh filed his nominations on Thursday in room No 33 of the Parliament House. The office of theElection Commission has also promised him to make his voters identity card as well.

"That should be proof enough that I am alive," he says.