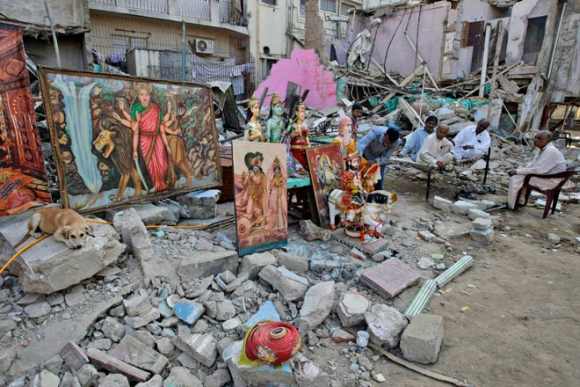 Image: The site where a pre-Partition temple was demolished by a builder in Pakistan

Pakistan's Supreme Court has sought a report from the government on its efforts to ensure access for the minority Hindu community to a century-old temple in Sindh province.

The Karachi bench of the apex court was hearing applications against the alleged denial of access to the members of the minority community to the temple -- Amrapur Asthan of Prem Prakash Panth -- during a suo motu proceedings on the attack on the All Saints Church in Peshawar.

Applicant Reejho Mal had sent an application alleging that Hindus are being denied entry to the temple in Tando Adam by the management of a government school that has been set up on the premises.

The bench, headed by Chief Justice of Pakistan Tassaduq Hussain Jillani, observed that the Constitution guarantees the rights of religious minorities in the country.

"And the Supreme Court will ensure that these rights are [fully] enforced," the judge said. 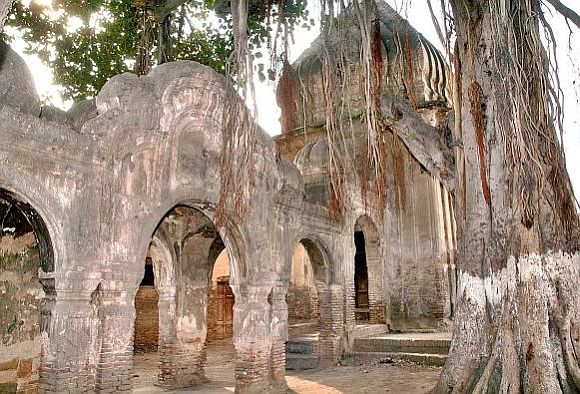 Image: A 160-year-old temple at Peshawar in northwest Pakistan which was reopened to the minority community after six decades following a court order.

The bench instructed additional advocate general Adnan Karim to look into the matter. Meanwhile, the patron of the Pakistan Hindu Council, Ramesh Kumar Vankwani requested the Supreme Court to sanction the Hindu Gymkhana building to be used exclusively for Hindus.

Vankwani filed a concise statement informing that the Hindu community had built the Hindu Gymkhana in Karachi in 1926 for recreational purposes.

He said that the building was illegally declared as evacuee property and taken over by several institutions.

Eventually, in 2007, it found its way into the hands of the National Academy of Performing Arts. Most of the Hindu inhabitants migrated to India at the time of partition, leaving behind a number of properties and places of worship.

"These properties have been up for grabs. Some allege that locals forged documents in order to occupy land around temples and construct markets. These temples are located in areas where the value of land is very high. This acts as a magnet for the land mafia," the Express Tribune daily reported.

"No temple here exists that has been spared by land grabbers," claims Amarnath, a resident of Kirtarpura.

The helpless community can do nothing to protect the dilapidated and plundered buildings, the report said.

For around 5,000 Hindus living in Rawalpindi, Krishna Mandir is the only place of worship left. 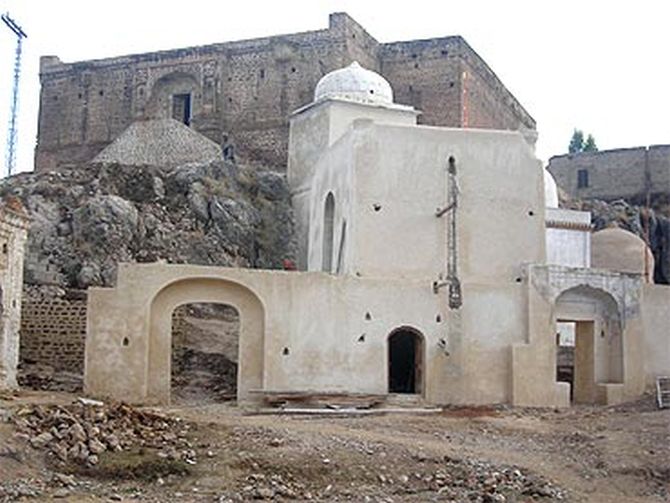 Image: A temple in Chakwal, Pakistan

The temple is built on a small plot which is not enough to accommodate the community members during religious ceremonies.

"But the fact that this temple remains is also nothing short of an achievement. There was a time when its future was also bleak and even today's there are challenges to its daily existence," the daily said.

The community members believe that the land mafia attacked temples around which Muslim families were living so that the families would vacate the land and the land grabbers could take over, considering the commercial value.

"There is a perception that the Hindus (who migrated) had buried their wealth in these temples. Temples on the outskirts of the city were dug but when they found nothing, they destroyed the statues and defaced the statues," a community member said.