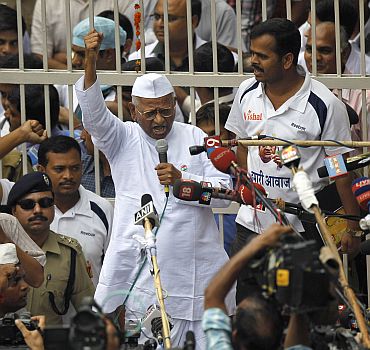 Anna Hazare's anti-corruption movement that saw Indians rally in support has been named among the top 10 news stories in the world this year by Time magazine, which listed the Arab Spring and killing of Osama bin Laden as the top attention-grabbing headlines.

Time magazine compiled 54 wide-ranging lists of the top 10 happenings in 2011 in the field of politics, entertainment, business, sports and pop culture.

Among the 'Top 10 World-News Stories' is "Anna Hazare's Hunger Fasts Rock India" with the magazine saying that "in a year with more than its share of protests worldwide, perhaps the most striking act of dissent took place in India, where the country's ruling coalition took flak for a host of corruption cases implicating a number of leading politicians".

Hazare's "fasts -- even the threat of them -- triggered mass demonstrations of support across India's major cities and heaped pressure on the government to create an independent ombudsman body capable of investigating the nation's political elites --even the prime minister -- and bringing the corrupt to justice". 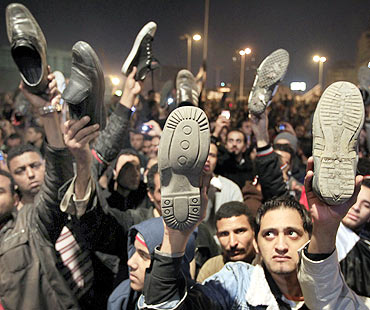 The top news stories of 2011 were the Arab Spring that spread to a number of countries. "When a young man set himself aflame on a street in the Tunisian town of Sidi Bouzid, his cry of anguish at the hardship of life under a stifling autocracy echoed across the region. Within weeks, his protest had sparked a full-blown people-power revolution that spread quickly throughout the Middle East," the Time report said.

The effect of the uprising was most dramatic in Egypt. "Cairo's Tahrir Square -- once a pedestrian-unfriendly traffic circle -- became the locus of protest and symbolic home of the revolution," the magazine said.

President Hosni Mubarak's regime fell in a matter of weeks and Mubarak announced his departure in February. The former president is now on trail on charges of corruption and the brutal crackdown by state security forces that led to the deaths of nearly 1,000 protesters. 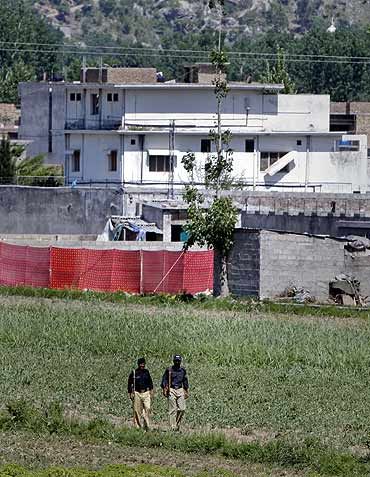 Image: Pakistani securitymen walk near Osama bin Laden's hideout in Abbottabad after the Al Qaeda chief was killed in a US operation
Photographs: Reuters

The killing of Osama bin Laden in a covert United States raid in Abbottabad, is ranked second in the 'Top 10 World-News Stories' by Time magazine.

"On Sunday night, May 1, 2011, President Barack Obama made a televised declaration from the White House, heralding the discovery and death of Osama bin Laden, the U S's most wanted foe," the report said.

Osama bin Laden, the world's most wanted terrorist, was killed by United States special forces in a helicopter-borne operation at Abbottabad, near the Pakistani capital, climaxing a over 10-year long massive manhunt.

'Bin Laden, 54, is dead and his body is in US custody,' President Obama had said after the initial story had been broken by news channels. 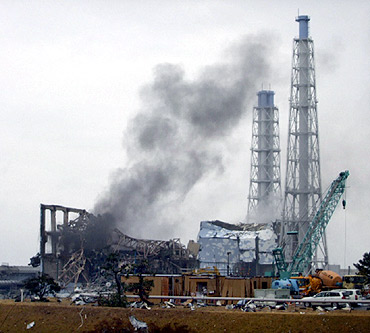 Image: Smoke is seen coming from the area of the No 3 reactor of the Fukushima Daiichi nuclear power plant
Photographs: Reuters

The devastating tsunami triggered by Japan's most powerful earthquake (measuring 9 on the Richter scale), devastation in northeast coastal Japan, forcing the government to declare emergency at two nuclear plants after their cooling systems failed.

"The quake and the waves it produced decimated towns and cities along an entire stretch of the northeastern Honshu coast. Nearly 16,000 residents are estimated dead, and the price of the disaster may reach into the hundreds of billions of dollars," Time magazine said.

Following the quake and ensuing tsunami on March 11, overwhelmed the facility and corrupted its coolant systems cooling functions of the No 3 reactor were lost and its core is believed to have partially melted.

The fall of Libyan dictator Gaddafi 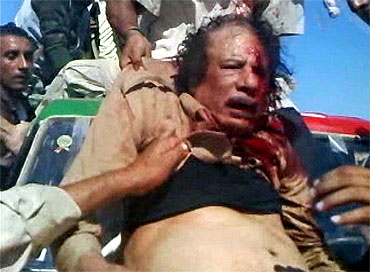 Image: A fighter pulls Libya's former leader Muammar Gaddafi onto a miltary vehicle in Sirte in this still image taken from a video
Photographs: Reuters

The Libyan dictator Muammar Gaddafi, a maverick who had ruled the country with an iron hand for over four decades, was shot and killed by rebels in his hometown of Sirte on October 20 after weeks of heavy fighting.

The former Libyan strongman died of his wounds after being captured from a hole where he had been hiding.

"Prompted by a rumored threat of genocide should Gaddafi overrun the rebel stronghold of Benghazi, the United Nations adopted a resolution in March that in essence legitimated a foreign intervention," the Time magazine said.

The fighting resulted in an estimated 20,000 to 40,000 Libyan deaths, while hundreds of thousands were displaced as refugees. 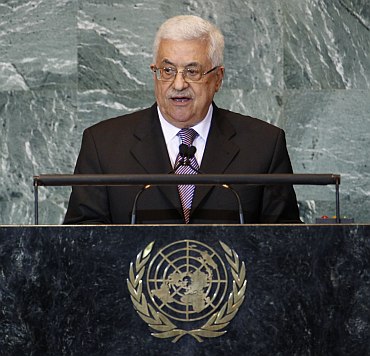 Leaders of the Palestinian Authority, this year, chose to appeal to the United States directly in their pursuit of statehood. The United States, however, said that they would veto any resolution on Palestine statehood in the powerful United Nations Security Council. The US argued that any statehood recognition should come through bilateral negotiations with Israel.

"But the Palestinians countered that the current right-wing Israeli government of Prime Minister Benjamin Netanyahu has shown little inclination to achieve a formalized peace and, particularly with its continuing expansion of Israeli settlements in the West Bank and in East Jerusalem, seemed antagonistic to the idea," the Time report stated.

"But in subsequent months, the effort proved stillborn: the certainty of a US veto, as well as pressure applied by Washington on other members of the Security Council, has almost guaranteed that the Palestinians' bid won't get off the ground and may not even reach the General Assembly, where the occupied territories could receive at least the symbolic gloss of international legitimacy," said Time magazine. 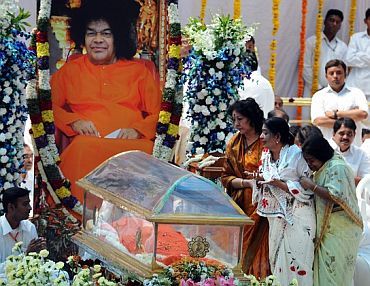 The famine in the Horn of Africa, Europe's financial crisis and the Utoya massacre also figured in Time magazine's 'Top 10 World-news stories'.

In a different category, Time magazine said the death of religious leader Sathya Sai Baba was among the top 10 'Religion Stories' of 2011.

Given that the spiritual leader was one of the "most famous gurus" in India, Baba's funeral was attended by hundreds of thousands of people and the "pomp wasn't surprising".

In other lists, Time said the story of Casey Anthony, the Florida mom accused of killing her two-year old daughter was the "most overreported" news of the year followed by the British royal wedding of Prince William with Kate Middleton, guesswork over the presidential candidacy of Donald Trump and Sarah Palin, the Dominique Strauss Kahn sex scandal and the reality TV drama that was Kim Kardashian's wedding.

Time said the self-immolation of Tibetan monks was the most "underreported" story of the year. As at least eight Tibetan monks, two of them teenagers, torched themselves this year to protest Chinese rule, the publication said "hopefully more attention will be paid" to the issue.

"There was his (Director Julian Schnabel) peculiar casting of Indian actress Frieda Pinto to play the title character, a passionate Palestinian schoolgirl -- a choice that undercut his good intentions".

Other lists included the best and the worst tweets, business blunders, political gaffes, scandals and top crime stories of the year.