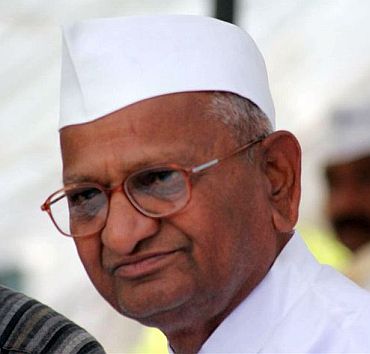 Gandhian Anna Hazare on Friday announced a 'jail bharo' movement across the country on April 13 after the government rejected his demands of chairmanship of the joint drafting committee being given to a civil society member and for a formal notification.

Giving the call, Hazare asked people to stick to non-violence during the agitation. After first announcing April 12 as the date for the agitation, he later changed it April 13 citing holiday on the earlier date.

"Today when (minister Kapil) Sibal and these people are saying this, I felt that the jail bharo agitation should take place in the entire country. But you should participate in the agitation keeping in mind Mahatma Gandhi. There should be no violence anywhere," Hazare said.

He recalled that he had organised similar jail bharo movements in Maharashtra in the past. 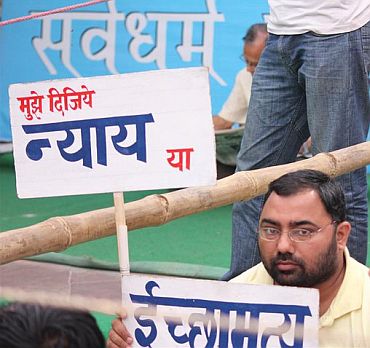 His announcement came after a meeting of HRD Minister Kapil Sibal with activists Swami Agnivesh and Arvind Kejriwal scheduled on Friday morning did not take place with both sides saying they were waiting for each other.

Rejecting the two demands of the social activists, Sibal also said that only government officials will be members of the joint drafting committee on Lok Pal Bill and that no minister will be part of it, if they insist on the chairman being from the civil society.

"There is no possibility of an official notification on the constitution of the joint committee but we have told them that we are willing to give an official letter through the law ministry and a press note," he said. 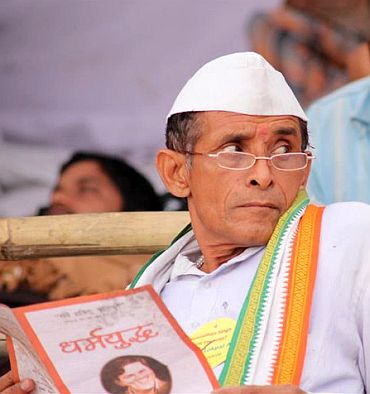 Hazare also urged the unemployed youths to join the agitation, saying they will get the morning breakfast and two meals in the jail.

Maintaining that his agitation is for decentralisation of power in peoples's hands and the proposed Jan Lokpal Bill will be a step forward in that regard, Hazare made it clear that the was not interested in becoming a party to any committee.

The veteran socialist said he has written a letter to Prime Minister Manmohan Singh today suggesting names of former Chief Justice of India J S Verma and Justice Santosh Hegde for the chairmanship of the committee to draft the new Lokpal bill. 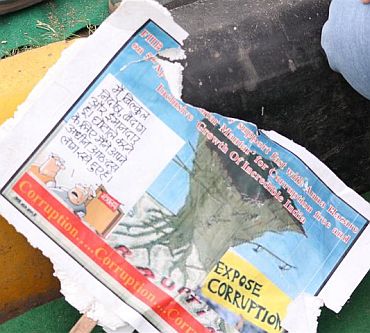 Hazare said that corruption in the country could be checked if the agencies involved in fighting the menace were brought under the Lok Pal instead of the government.

"CBI has investigated many big cases before and after Bofors. But did any minister or IAS-IPS officer go to jail so far? This is because even if somebody wants to take tough action, the government will stop him," Hazare said. 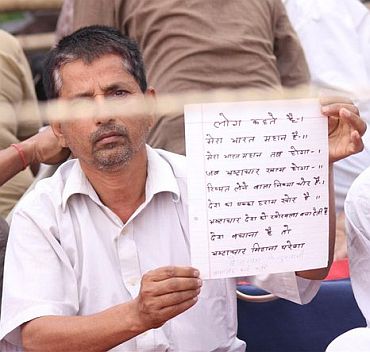 "If the agencies responsible for controlling corruption, which are under the government, are brought under the Lokpal, then the corrupt will go to jail. That's why we are demanding this kind of Lok Pal," he said.

Hazare also cited the example of Right to Information Act saying that the RTI changed the ball game and now the government has to follow rules and people will have control instead of people following the rules and the government having control which the Britishers proposed.

"Today there are two reasons for corruption that has risen in the country. The laws are weak so the corrupt have no fear. Secondly, lot of people running the government are taking along these corrupt people." 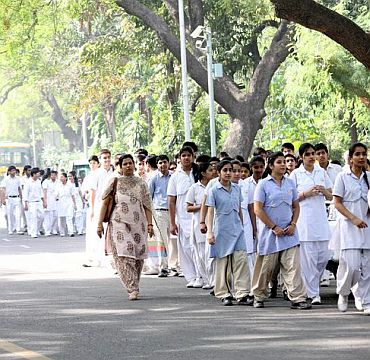 "There is also a third reason that there has not been a decentralisation of power. Corruption rose as power was centralised in the government. Lok Pal Bill is for decentralisation and our agitation is precisely for that," Hazare said.

Social activist Swami Agnivesh, who shared the dais with Hazare, however, sounded optimistic about a resolution.

"I do not want to colour it with something confrontationist. No, not at all. He (Sibal) has been very conciliatory and he has spoken to me on phone and he wants to resolve it as early as possible as possible, hopefully by this evening," he said. 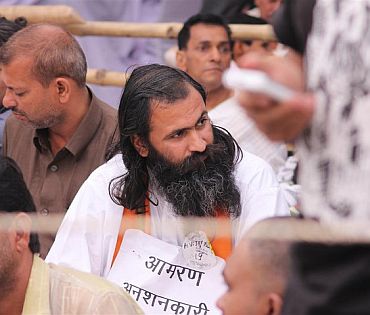 Sibal said the government has been very accommodative.

Former IPS officer Kiran Bedi also said she was very much with the movement and will continue with the fight.