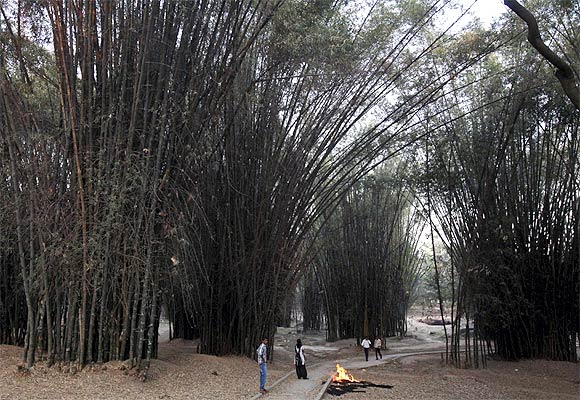 And just who is accusing Bangalore of being racist? It's Bangaloreans themselves and the Bangalore media.

We are all so quick to bash each other up, and to accuse our citizenry and police of being discriminatory, says M D Riti.

Are we racist? Suddenly, Bangalore is being accused of being racist and of discriminating against ethnic minorities.

Bangalore, the cool, peaceful former garden city, is today a city of road construction, traffic jams and one ways. It is no longer the oasis that all corporates flocked to because it was 'so like Silicon Valley in terms of climate, good schools and health care' and its residents were far more accepting and accommodating than those of other states.

And just who is accusing Bangalore of being racist? It's Bangaloreans themselves and the Bangalore media. We are all so quick to bash each other up, and to accuse our citizenry and police of being discriminatory.

It looks to me as if scattered crimes or harassment of individuals are being spot-lighted, and labeled as racism. Similar wrong acts are perpetrated against locals all the time. But they are given different labels, like 'road rage' or 'gender discrimination,' which is what they really are.

Let's define racism, first. Racism is usually defined as views, practices and actions reflecting the belief that humanity is divided into distinct biological groups called races, and that members of a certain race share certain attributes which make that group as a whole less desirable, more desirable, inferior, or superior. The term could also be used to describe discrimination against ethnic groups.

A college student of Assamese origin loses his marks card while he is riding his bike. He goes to the police station to register the loss and get a receipt so he could get a duplicate from college, but the station officer refuses to oblige, asks him why he can't speak the local language after living in Bangalore for 7 years.

Normal bad treatment one sometimes encounters in police stations everywhere. But when the complainant is from the North East, Bangalore is suddenly labeled 'xenophobic' by the media. 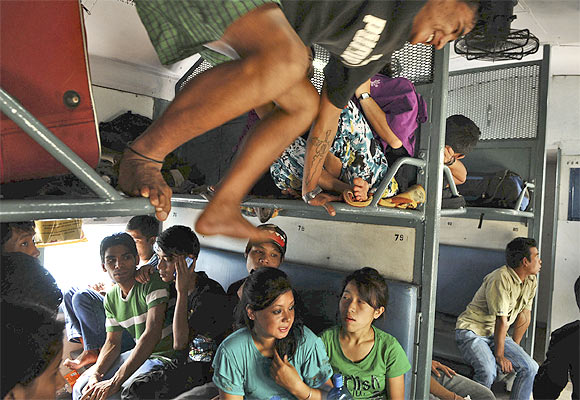 Image: People from the North-East on a train on their way back to their homes at a railway station in Bangalore, August 17, 2012.
Photographs: Reuters

Another married student of African origin on a bike is harassed by another drunken bike rider, and the incident ends in his being assaulted by the biker and his friends.

As passersby watch but don't intercede, the media labels Bangalore as 'ugly racist.'

Why don't they remember this is the city where people have been shot, hacked and mugged in full view of passersby who have scurried past or rubbernecked the violence?

They are not being passive because they are silently supporting the aggressors or being racist.

The victim is featured in the media talking about how he has been subjected to various forms of racial discrimination since he moved to Bangalore to study: Namely, higher house rent and tuition fees than the native Bangalorean pays.

Foreign students certainly pay higher fees than locals at American universities. Nobody calls those universities racist. Foreigners are generally perceived to be richer than locals by landlords in most countries, and are often asked for higher rents. Cheaper housing is available too everywhere, and renters can make informed choices.

A traffic cop prevents Manipuri playwright and theatre director Swar Thounaojam from getting into her car when she is being heckled by a large group of men who are very obviously sexually aggressive.

Swar herself speaks strongly, and very rightly, about the need to look into unreported and undocumented cases of violence against women in Bangalore's public spaces. Economic and Political Weekly links this incident to North Easterners being subjected to racism in mainstream India.

Locals have become a minority Bangalore now has all the classic problems of a city growing at breakneck speed.

The city's population has increased by 46.68 per cent between 2001 and 2011, up by nearly 12 percentage points over the growth rate in the previous decade.

The locals have become a minority: They are officially less than 50 per cent of the city's population now. It is also believed to have the highest number of pubs and cigarette smokers amongst all Indian cities.

The rich poor divide is growing rapidly every day, and the locals do not form a high proportion of the super rich.

The anger towards immigrants of all kinds who are taking jobs away from the locals is rising every day in Bangalore. This is not racism, and can never be understood or resolved if viewed only through this narrow perspective.

M D Riti is a writer who lives in Bangalore. The views expressed are her own.