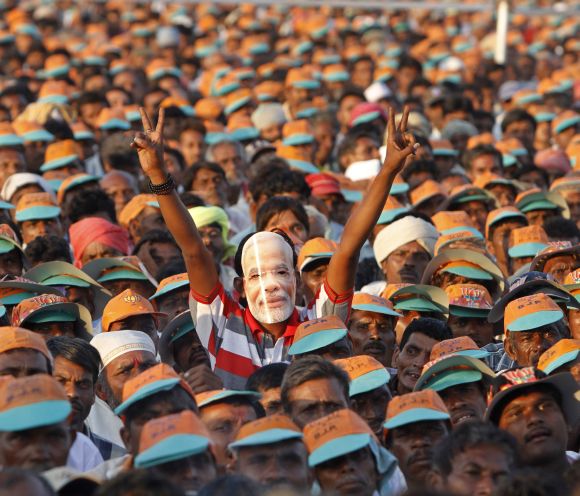 Political analyst Viduyt Thakar tells Rediff.com's Sonil Dedhia the importance of the 2012 Gujarat assembly elections, why Chief Minister Narendra Modi is so popular and why he thinks that this is the last chance for Congress to come back to power in Gujarat.

Why do you think Narendra Modi is so popular among the people of Gujarat?

The youth of Gujarat love Narendra Modi. Out of the 37.8 million Gujarati voters 20.4 million are below the age of 40. A little over 1.2 million voters are between the ages of 18 and 19. Modi is tremendously popular amongst the youth because he represents them.

The second point is that Narendra Modi is very famous amongst the women of Gujarat. The reason is that during the last 11 years there have been so many melas and other cultural programs that Modi has oragnised for women. Women can freely move around in any part of the state even after midnight. This shows the measures taken by him for the safety of women. There is a saying in politics, "jaise log hote hai waisi sarkar milti hai (A government is similar to its people)". I feel there are good people staying in Gujarat and they have got a good leader and a good government.

The third reason in that he is an amazing orator. He charms his audience with his speeches. He can make a direct rapport with people across any sections.

After the Godhra riots in 2002 the state has been completely peaceful. There is not even a single day in the last 10 years when Gujarat has seen a bandh or curfew. Narendra Modi has not only developed the state but has proved to be a good administrator as well. 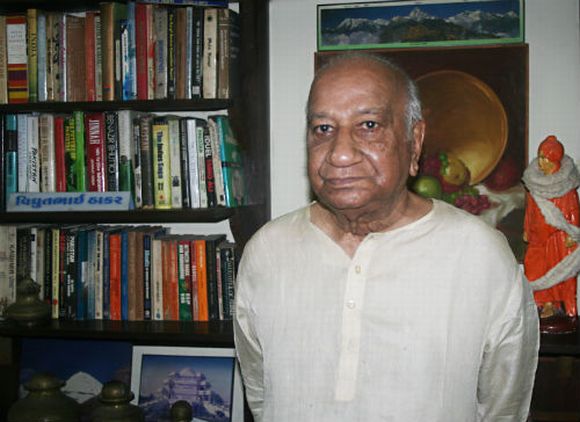 A lot of people have raised issues against Modi's development plans. It is said that the officers in his party are all corrupt.

Corruption is an issue. But when it comes to Modi's personal life he is above corruption. He has no family to support, so no one can accuse him of collecting money for his personal benefits. On the other hand we have had so many examples of corruption related to (Congress president) Sonia Gandhi's family.

No, I am not saying that. I don't think Gujarat will ever be a corruption-free state. When a person is ruling the state for more than 11 years some administrative lapses are bound to happen. This happens in every state. Modi deliberately doesn't allow corruption. The system and the atmosphere that he has created, has lead to minimum corruption. I don't think any government can guarantee zero corruption in India.

How would you define the leadership style of Narendra Modi?

He has proved to be an outstanding leader. A section of the media looks at him as the future prime minister of our country -- something that speaks volumes about his leadership.

Modi is a very dynamic leader who has a clear vision. He has always faced the worst scenarios and has come out of it like anything. I can say that Narendra Modi is the leader of the people. He knows what the people want even before they demand it and delivers it to them.

'I doubt Keshubhai's GPP will get even 10 seats' 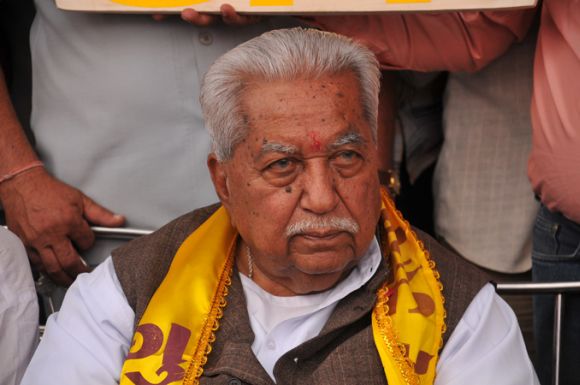 How do you think the 2012 Gujarat assembly elections are going to be different from the last two elections?

The Congress last won the Gujarat election in 1985. Since then they have never come to power. They have lost five times in a row. I am sure that they will be defeated for the sixth time too.

The Gujarat politics have been centralised on one person. The parties have become totally irrelevant. This is not a fight between BJP and Congress or BJP and Gujarat Parivartan Party. This is a fight between Modi and the rest of the people.

The society today is divided between pro-Modi and anti-Modi. Till now the beneficiary of the anti-Modi votes was only Congress. With Keshubhai Patel's GPP coming into the picture the votes are going to divided between these two parties.

Forget about Congress coming to power -- my prediction is that in this election they will not be able to retain even their present position.

How much of an influence will the Muslim voters have in the elections?

The Muslim votes consist of 11 percent of the total voters in Gujarat. In 2002 the total beneficiaries of these votes were Congress. In 2007 practically the same situation was repeated.

I would say around 10 percent might have voted for the BJP. In 2012 the situation is totally different. The difference was seen in the municipal and panchayat elections, where nearly 32 per cent voted for BJP. Even if there is an increase of five percent of these voters voting for BJP from the last elections, it is completely a bonus for Modi.

Gujarat's Muslims are being divided into two ideological sections. The first one is Deobandi. These people are still rigid about the BJP. The other section is the Beralvi Muslims. They belong to the moderate section of the society who have a rational approach.

Also the Shia and the Bohri Muslims have also started believing in the BJP. You see, a section of the society cannot go on opposing a regime. They too need the support and help of the government. Muslims have also realised that after Godhra there haven't been any riots or curfews in the state.

With Gujarat Parivartan Party coming into the picture, who do you think will suffer -- BJP or Congress?

I think Congress is going to be the sufferer. As I said earlier the votes are going to be divided.

We all know that Keshubhai's strength is the Patel community. We must not forget Patels are not a monolithic vote bank. The Patel community has interests in industries, education, commerce and other places. They can't afford communal politics. There are 70 lakh Patel voters out of which 60 percent are in Gujarat and the rest in Saurashtra. Keshubhai has a strong hold in Saurashtra and not Gujarat. I doubt they will get even 10 seats. If they do they are going to be fortunate. I am sure they are going to be a one digit party.

'My view is that Modi will prefer to stay in Gujarat' 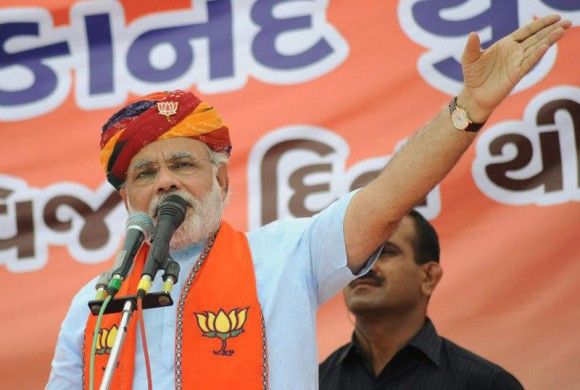 If BJP comes back to power, do you think Modi will leave Gujarat for New Delhi?

This election is like a semi-final match for Modi. If he gets around 135 to 140 seats then naturally his stature will increase. I don't think any politician will refuse to be the prime minister of India.

A section of media sees him as the prime minister. Out of 28 chief ministers only one has been selected to become our country's leader. My view is that Modi will prefer to stay in Gujarat.

There is no doubt that he is going to win, but if he wins by thumping majority then it will have a direct influence in the central Cabinet. I am sure the Congress have realised this.

If Congress would have been sure of their victory in Gujarat then Sonia Gandhi and Rahul Gandhi would have had rallies every single day. Rahul Gandhi doesn't want to repeat what happened with him in Uttar Pradesh.

'Congress doesn't have a clear ideology' 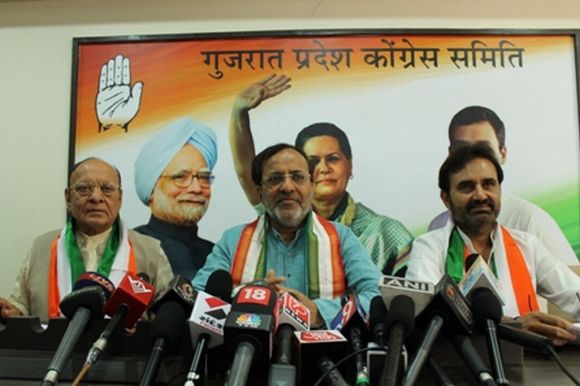 How do you see the Congress party's position in Gujarat?

I feel they are very incompetent. As I said earlier, the party has not come back to power since 1985. It is going to be very difficult because the problem is that unlike the BJP, Congress doesn't function as a family.

The party also has a lot of structural issues and is not clear in their ideologies. It is a worst case scenario when people in your own group have a clash in ideologies.

Why do you think Congress is not able to reclaim its ground in Gujarat?

Congress as a party has failed to produce a real leader. They have always had to borrow leaders from outside. Shankarsinh Vaghela is not originally a Congress leader. Arjum Modwadia and Shakti Singh, who are the claimant of chief minister's seat of Gujarat from the Congress side, cannot stand in comparison to Modi.

Another problem is that Congress doesn't have any clear ideology. They are a very confused party. Commitment comes from ideologies and Congress do not have committed voter. Also whenever Congress has lost power in any state they have never come back to power. This is going to be the last chance for Congress. If they fail to rise up to the expectation then they might not be able to be an alternative in the state.