Get the Lokpal Bill passed or go: Hazare to govt 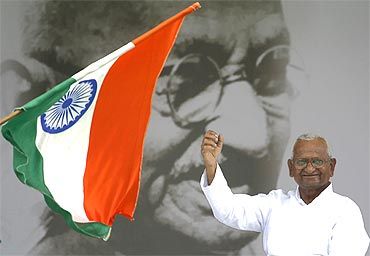 Anna Hazare on Sunday warned of "unprecedented revolution" in the country if Lokpal Bill is not passed by August 30 and said the government will have to "either get the bill passed or go."

Accusing the government of "betraying" the civil society on the Lokpal issue, Hazare, whose fast entered the sixth day on Sunday, told a large gathering of his supporters at the Ramlila Maidan in New Delhi that the government is not "honest" in its intent to fight corruption.

"If the government does not get the Lokpal Bill passed by August 30 there would be an unprecedented revolution in the country by the people.... The government will have to either get the bill passed (in Parliament) or go," he said after a large number of people marched from India Gate to the Maidan expressing solidarity with him. 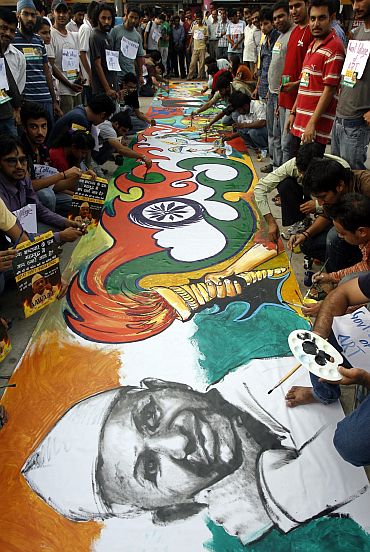 Calling his campaign against corruption as the beginning of "second struggle for Independence", the 73-year-old Gandhian asked the youth to keep the "flame of revolution burning whether Anna is alive or not."

Noting that he has been fighting against corruption for the past 20 years, Hazare said the government betrayed them on the Lokpal issue despite constituting a joint committee for drafting the bill.

"They constituted a joint committee after my fast in April. But nothing came out of that meeting despite talking for two months. They betrayed the civil society.... The government's intention to fight corruption is not noble," he said.

'The fight has begun now' 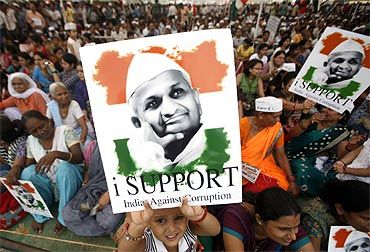 Recalling the events leading to his arrest by the Delhi Police on Tuesday before he was to launch his indefinite fast at J P Park, Hazare said the police came and took him and some of his associates and later told them that they have been arrested.

He said within hours after he was lodged in Tihar Jail, a police officer came to him and said that he was being released.

"I told him that I will not leave the jail until Parliament passes the Jan Lokpal Bill. I told him very clearly...," he said.

"The fight has begun now.... The youth should be ready for the fight," he told the gathering.

'We are ready to talk if they are ready' 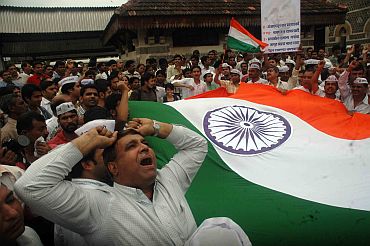 Hazare also recalled the struggle in the run up to RTI Act being passed in Parliament and said the legislation has now brought scams like 2G and Adarsh to light.

"They have been brought to light because of the RTI Act. We fought for the RTI Act. I have fasted on many occasions for many causes," he said.

Hazare said there was no "dark spot" in his life otherwise his opponents would have "broken my life".

Lawyer and Team Anna member Prashant Bhushan said the Prime Minister should be brought under the ambit of the Lokpal.

Bhushan also said the Team Anna was ready to talk to the government, but would not compromise on its core issues. "We are ready to talk if they are ready. Our Jan Lokpal Bill has been amended 13 times. All suggestions have been included," he said.

He said that the government can incorporate main points of the Jan Lokpal in its bill and if they suggest any better system "we are ready to discuss that also".

Bhushan also demanded that the government bring a strong Judicial Accountability Bill along with the Lokpal Bill.