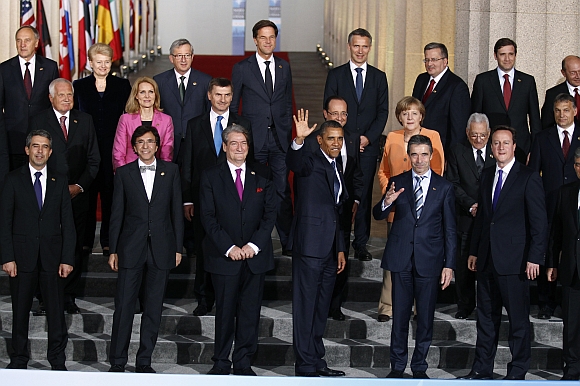 As Nato leaders assemble in Chicago to discuss Afghanistan, the Taliban have issued a 14-point agenda to its leaders, with a succinct message: Get out now, reports Tahir Ali

While North Atlantic Treaty Organisation leaders are gathered in Chicago in a summit with Afghanistan as the most important agenda on the table, the Mullah Omar-led Afghan Taliban have asked the member countries to avoid working for 'America's vested interests' and to immediately leave the country.

Because of public pressure, most NATO member nations want to hand over the security to Afghan forces by the end of 2014, while some members have pledged financial assistance to the Afghan government to tackle Talibanisation on its own.

At such a crucial time, the Afghan Taliban have vowed to continue their jihad without an option of talks or political solution, and have issued a 14-point statement to the Chicago Summit participants:

'1. The invasion of Afghanistan by America and its allies under the banner of 'war of terror' was an unjustified and tyrannical action which was only carried out for political and economic gains.

'Terrorism and ground realities had nothing in common. No Afghan had a hand in military operations in other countries and neither is there any proof; hence the occupation of Afghanistan by America is not sound legally or logically.

'2. As a result of this occupation, the invasive America imposed upon the Afghan Muslim nation a few war criminals that were castoffs, whose hands were tainted with the blood of innocent humans and who were involved in transgressing against the life, wealth and honour of the ordinary people.

'The Afghans have been facing torment for the past decade, while the invaders have just turned a blind eye to them.'

'French decision to leave based on ground realities' 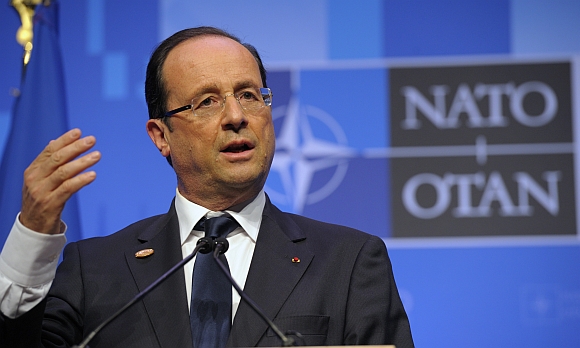 3. American intelligence networks including the Central Investigation Agency state that members of Al Qaeda have all but left Afghanistan and that there are not more than 50 of their cadre left.

'Therefore, the military presence of America is not for its own security, but a long-term strategy for turning our country and the region into its colony.

'The declaration of the new French president, Francois Hollande, that all their troops will be removed from Afghanistan at the end of this year is a decision based on realities and a reflection of the opinion of its nation.

'We call upon all the other NATO member countries to avoid working for the political interests of American officials and answer the call of your own people by immediately removing all your troops from Afghanistan.

'4. The invading soldiers in Afghanistan martyr the defenseless children, women, elderly and other people of Afghanistan in their night raids and blind bombardments without worrying about the consequences.

'The perpetrators of these violations are all criminals. The claimants of human rights must not condone them. Similarly, the occupying forces have created local militias under the title of 'Arbakis' who transgress against the life, wealth and honour of ordinary people and martyr innocent Afghans even though they cannot confront the Mujahideen physically.

'If the invaders want to fund and equip such groups and continue their blind bombardments then the responsibility of civilian losses caused in Afghanistan will rest squarely upon the shoulders of these forces.'

5. We want to declare to the whole world that the stooge Kabul administration tortures innocent prisoners, extracts false confessions and hands out long-term prison sentences. The security apparatus of Kabul regime discriminates and treats them with prejudice.

'Ending this oppression is the obligation of every human being.

'6. The invading forces have destroyed whole villages along with their inhabitants (Tarako Kalacha as example) in Afghanistan with 25-tonne bombs. They have razed entire markets with hundreds of shops in Helmand and Uruzgan.

'They have also uprooted the greenery and orchards in Panjwai and Zhari districts of Kandahar and similarly in Band-e-Sarda of Ghazni province. All this savagery is committed under the slogans of war on terror.

'Today's international community which touts tolerance, justice and human rights, how can it justify this savagery in Afghanistan at the hands of these self-proclaimed civilised men?

'7. In order to brainwash the public and to vilify the mujahideen of Islamic emirate, various networks in Afghanistan headed by the invading forces commit some acts such as the destruction and burning of bridges and schools, carrying out explosions among civilians, targetting of specific people for vile purposes.

'The Islamic emirate declares its complete disavowal from them.'

'Majority of Americans want their troops out' 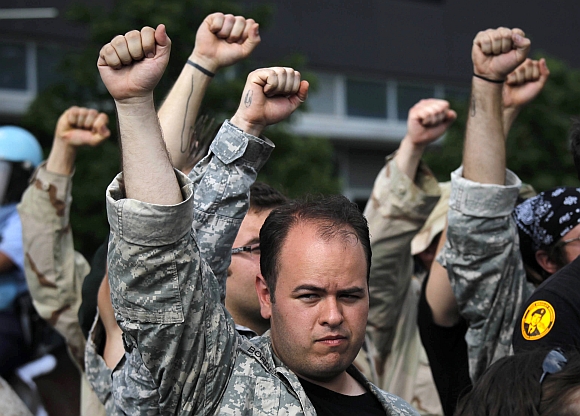 8. The occupying American forces have created secret prisons inside all of their airbases in Afghanistan where they keep innocent Afghans, and carry out various forms of torture on them which has resulted in the martyrdom of many.

'Besides this, thousands of innocent Afghans are being held prisoners in Kandahar and Bagram airbases without any charges. These are all people who have no knowledge of the New York (9/11) incident but are been held captive under that pretext for years and are languishing in unbearable conditions.

'9. A survey conducted in April by CBS News and New York Times showed that 69 per cent of Americans oppose the war in Afghanistan and want their troops out.

'Similarly, the people of nations allied with America have also shown their opposition to the occupation of Afghanistan. So the NATO member countries, who claim to be the elected representatives of its people and consider their government the people's government, how will they answer the call of their people in this summit?

'10. The Islamic emirate once again declares that it holds no agenda of harming anyone nor will it let anyone harm other countries from the soil of Afghanistan, hence there is no reason for the occupying countries including America to continue the occupation under the pretext of safeguarding its own security.'

'They want to prolong the occupation of Afghanistan' 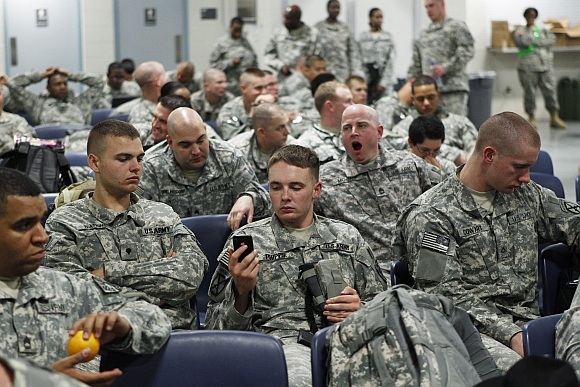 11. The occupation of Afghanistan by America through the use of force is a clear violation of a sovereign State which is not justified under any international law. Those Afghans that are fighting against this violation are independence seeking mujahideen, and putting up resistance to this occupation is their legal right.

'This armed struggle will only come to an end when the Afghans acquire their independence and a government of their choice. Imposed agreements and international conferences are not the solution to the Afghan quandary.

'The solution lies in giving the Muslim Afghan nation their complete legitimate and natural right.

'12. The Islamic emirate has left all military and political doors open. It wants to obtain the rights of the Muslim Afghan nation through all possible ways and as a responsible force, is prepared to accept all it announces however the invaders are utilising a one step forward, two steps backwards tactic.

'They are conjuring artificial excuses to prolong the occupation of Afghanistan, are wavering in their stance and do not seem to have a clear strategy for a political solution. The Islamic emirate considers the claims of the invaders of finding a political solution as meaningless until they come out of their fluctuating unstable State.' 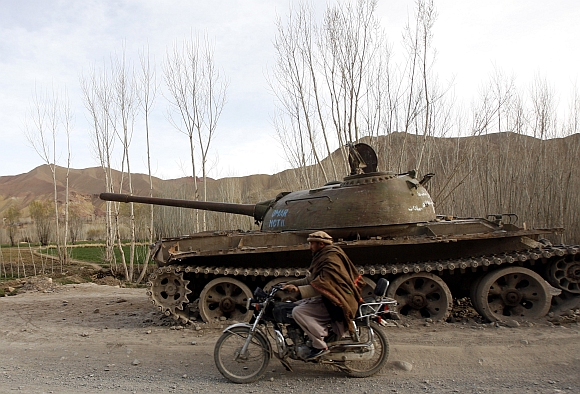 The foreigners should forgo prolonging and complicating the Afghan issue for their colonialist objectives.

'14. We must reiterate that the mujahideen of Islamic emirate will keep proceeding with their ongoing jihad until it attains its goal. The terrorism and savagery of the invaders and their stooges will not be able to stop it.

'We call upon the leaders of the NATO member countries to realise the ground realities of Afghanistan and acknowledge the natural rights of the Afghans which are an independent nation and establishment of a government of its own choice.

'Similarly, they should stop the gross human right violations ongoing in Afghanistan and the desecration of the sanctities of Afghans committed by their troops. But if they still refuse to pay attention to the consequences of their criminal actions, then they will also be erased along with their oppression and terror on this blessed soil just like the previous imperialists and only their stories shall remain.'