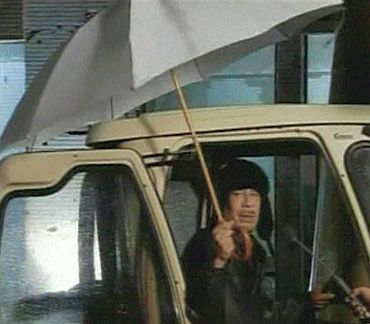 In assessing Muammar Gadaffi's continuIng defiance of the international pressure to force him to quit, the following facts have to be kept in mind, says B Raman.

What Gadaffi is facing in Libya is not a revolutionary situation as one had seen in Egypt with mass participation by the youth and other sections of the population, but a civil war like situation with members of rival tribes taking a leading part in the fighting on both sides.

Despite reports to the contrary, the involvement of youth in the fight against Gadaffi is not as widespread as it was in Egypt against Hosni Mubarak.

The fight against Mubarak was led  by innovative and enterprising youth who had nothing to do with his regime in the past, but the fight against Gadaffi is being led by a small group of ex-politicians, ex-bureaucrats, tribal leaders, lawyers  and others, who had collaborated with Gaddafi's oppressive regime, but  had fallen out with him only recently.

They do not command the same respect with the general population as the young leaders of Egypt did.

Gadaffi has forces willing to do his bidding 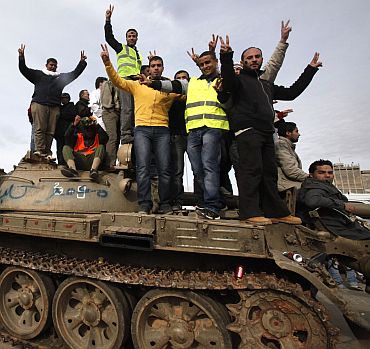 Mubarak had only two forces at his command for dealing with the protest---the riot police which comes under the Ministry of the Interior and the Army.

The riot police got discredited in the initial days of the protest and the Army was not willing to use force against the protestors.

Gadaffi has built up a multiplicity of forces to maintain his rule. If one force is unwilling to carry out his orders, there are others who are willing to.

Ever since he succeeded Anwar Sadat in 1981, Mubarak had enjoyed a cosy relationship with the West in general and the US in particular. He also enjoyed good relations with Israel.

The intelligence agencies of the US and other Western  countries had considerably penetrated and softened the Egyptian Armed Forces and intelligence agencies. This enabled the US to play successfully an activist role in bringing about a peaceful change in Egypt once it realized that Mubarak had to go.

Gadaffi has looked upon the US and Israel as foes 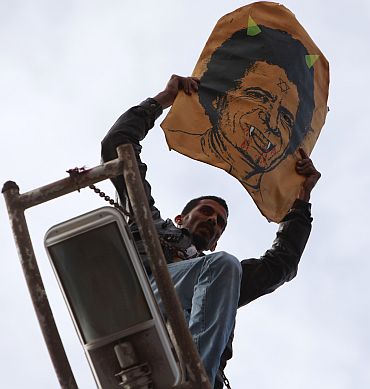 Ever since he came to power in 1969, Gaddafi and his forces had looked upon the US and Israel as Libya's principal enemies. They had prepared themselves for over 40 years to confront the US and Israel.

The US had not been able to penetrate the Libyan security forces and intelligence agencies in the same way as it had done in Egypt. It still does not know through whom it should and it can operate in Libya.

The recent defectors such as the Libyan diplomats posted abroad and some of the ministers are unknown quantities in Libya. They will have only limited value as assets for the US.

There are many strands involved in the protest movement in Libya ---- anti-Gadaffi elements, rival tribes and anti-foreigner elements such as those who attacked Chinese and South Korean workers.

Resentment over the better quality of life enjoyed by foreign workers has been an important factor in complicating the situation in Libya. One has not so far seen attacks on foreign workers in Tunisia or Egypt or other countries affected by the current unrest.

Gadaffi may turn out to be another Saddam Hussein There are only two ways of bringing about the end of the Gaddafi regime---- by inciting a revolt against him by the multiple forces raised by him.

The West has not so far been able to do this. The other way is by training and arming the protesters who have liberated large pockets of Eastern Libya, with Benghazi as the epicenter, and helping them to march on to Tripoli to get rid of Gaddafi.

The distances involved are large and even if the West provides the protestors with  an air cover by enforcing a no-fly zone, the marchers have to cross areas inhabited by tribals who have till now been loyal to Gadaffi. If the fighting is fierce and continues for a long time, there could be a danger of a 'Balkanization' of Libya.

Gaddafi may not be another Mubarak, who left with his tail tucked between his legs. He may turn out to be another Saddam Hussein----defiant till he dies.