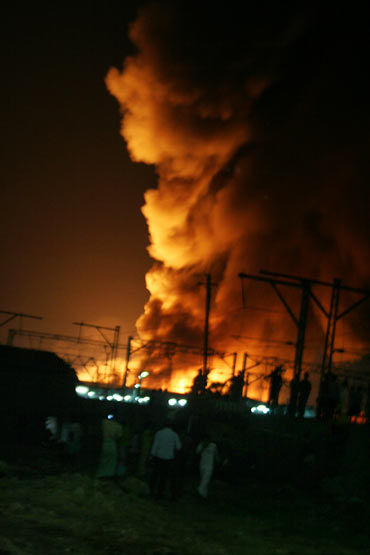 Twenty-six fire engines and 12 large 'jumbo' tankers had to be summoned to the spot. The fire broke out around 7:30 pm, a local fire department official said, adding that an estimated 700 to 800 houses had been gutted.

A staffer at the fire brigade station at Bandra Reclamation said they received the call informing about the fire at 8:30 pm.

Mumbai Municipal Commisioner Subodh Kumar had a near escape when a slab of the burnt railway over-bridge caved in metres from where he had been interacting with the media persons.

Talking to rediff.com, Kumar said, "90 per cent of the flames have been doused. There are no casualties, but nine persons with minor injuries have been shifted to nearby hospitals."

The Municipal Commissioner, however, declined to comment on whether the hutments near the over-bridge were illegal or not.

Fire engineered by the builders' lobby? 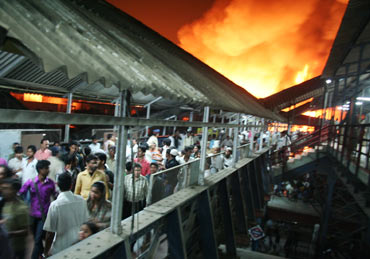 Residents of the area stated that the fire that began near a mosque in Gareeb Nagar.

Nasreen, who was with her four children when the fire broke out, claimed that the fire brigade reached the spot an hour late.

Residents are now appealing to the state government to rebuild their houses besides providing compensation.

They strongly believe that the fire had been engineered by the builders' lobby, who have an eye on a huge tract of land at a prime location. 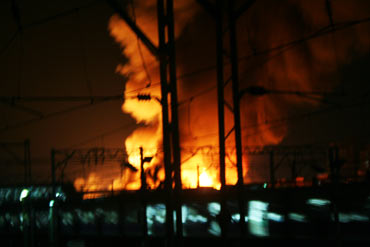 Nasreen's mother, Rukhsana Sheikh said, "It is not possible that a cylinder blast could be the plausible reason behind such a huge fire that gutted 200-300 tenements."

Most of the locality's womenfolk were cooking their evening meals when the fire broke out and now they have nothing to eat.

Nasreen could just salvage a small purse and her mobile phone in the melee that ensued, but she is thankful to God that her family is safe.

One could see scenes of people salvaging their life's belongings at Behramapada, as a huge crowd of people watched the fire.

They salvaged whatever they could 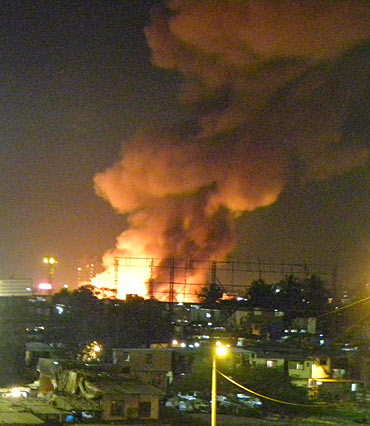 People could be seen walking with sewing machines and huge bags of clothes on their heads.

Whenever a tragedy of this scale occurs, people from the neighbouring areas come forward to help the distressed. The same was seen in Behrampada, where the embers are still burning. Local residents were seen offering water to the distressed. One person who was hurt, was ferried away in an ambulance that made its way through the throng of people crowding the scene.

A large posse of cops has been requisitioned to control the situation. Unconfirmed reports suggested that more 700 policemen drawn from the Mumbai Police, Government Railway Police and State Reserve Police Force were on the spot trying to control the crowds.

Why help came late for Behrampada 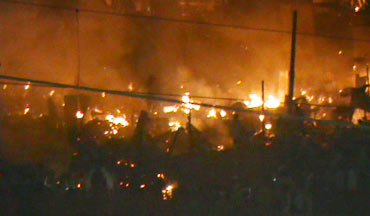 Certain services on the Central Railway's Harbour Line -- that connects the northwestern suburb of Andheri to the distant Navi Mumbai area of Panvel -- were suspended as the firemen battled the flames.

"We don't know the actual cause of the fire, but it is huge and a lot of people could have lost their lives," a local volunteer told rediff.com.

"We are trying our best to move the public to a safer place," an exasperated constable from the Railway Police added.

Fire officials earlier described the fire as a "brigade call" (a call-sign indicating that the fire is absolutely out of control).

The tankers ran out of water trying to douse the fire, a fire brigade source said, compelling the vehicles to seek replenishments.

The only motorable road that leads to the station from the Western Express Highway is no broader than two lanes. Hawkers and parked vehicles line the entire stretch even as pedestrians and autorickshaws try hard to negotiate their way around them.