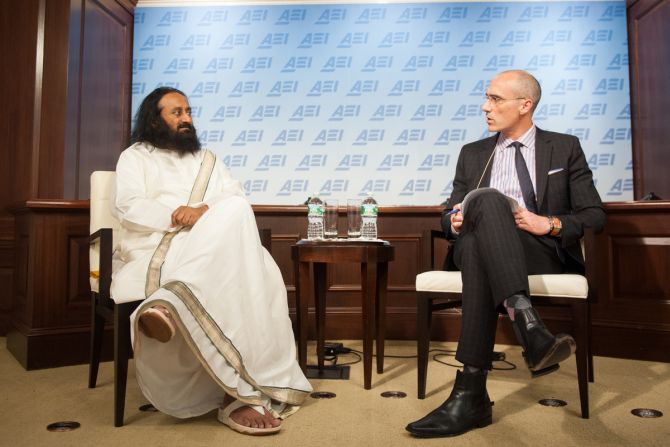 During an interaction at the neo-conservative American Enterprise Institute -- a Washington, DC, think tank – on ‘A Conversation about Human Flourishing’ that was moderated by AEI president Arthur Brooks, Shankar was asked to talk about ‘Modi the man’ since reams had been written about him as a politician.

Sri Sri said although Modi was tough, “Few people know that he has such a soft heart". “He means business. I think that says it all,” the guru said.

Brooks jumped in and said, “The new prime minister is welcome at AEI and my question to him will be, tell us, about Sri Sri the man.”

Answering a contention among sceptics that India is being slowed down in its economic growth and development by its 'messy democracy,' Sri Sri said, “Corruption and the number game is a big problem in India. That has been there, you know, because it’s such a large population and there are many issues in the country.”

“The number games have been a very big issue in the past decade. So there are good leaders in the government who want to take good steps for economic reforms. They’re always being pulled down by regional parties or allies who don’t see eye-to-eye.”

'We would prefer to be a democracy, even if it's slower, than dictatorship' 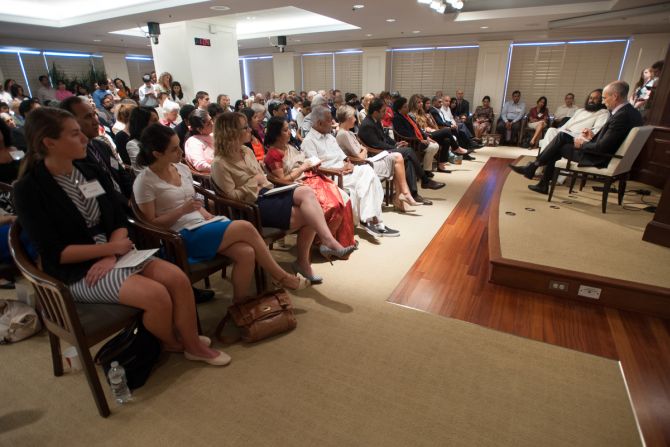 Lauding the advent of the Bharatiya Janata Party with a massive majority, Sri Sri said, “Fortunately, this time they’ve got a clear mandate. The government has given a clear mandate, so they’re not sort of a coalition government now of different parties.”

Thus, he argued, “This can be used…can be of a good advantage for faster progress. You know, but one thing, we would prefer to be a democracy, even if it’s slower, than a dictatorship that could be a faster one.”

“Here the voices of individuals are heard. Different voices could be heard in a democracy and which in a dictatorship, there is no chance. For anything we would not want a dictatorship,” he added.

Since he has millions of followers around the world, when asked what are the biggest obstacles they face to achieving personal happiness and if these obstacles differ across countries, based on their general standard of living or are they universally applicable to humankind, and how these obstacles be different in India and United States, Sri Sri said, “As many different cultures or languages are there in the planet, that many problems, issues, challenges -- I would say challenges are there.”

According to Sri Sri, “Scams and slums have caused a lot of problems in India. In the same way, here in the US, where you see classroom violence… you send kids to school and you don’t know what will happen to them.”

“You know, there is such fear in parents about their kids coming back home safely because we hear now and then of the gun culture…more gun stores than grocery stores in US is what I read in the newspaper, which is really appalling,” Sri Sri said.

'Capitalism without compassion will not lead to a just society' 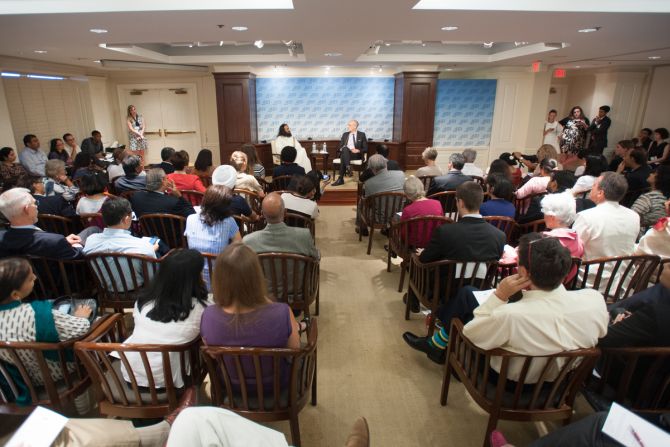 Sri Sri also said that “rising depression, in Europe 40 percent of the population, 38 points of percentage population are suffering from depression. So these are major issues. Depression may not be an issue in India, but corruption and poverty are an issue. And eroding family values is another issue in India.”

“Addiction is another big problem in India. In the last three years, alcoholism has increased threefold. Drug abuse has almost consumed a couple of northern states in India,” he said.

When asked by Hemal Shah, one of the rising young stars at AEI, who is part of the think tank’s India programme, as to how in this busy, complex world of Facebook, Twitter, and the Internet as a whole, what his thoughts were on how the fast pace of social media was affecting our happiness, Sri Sri said, “You shouldn’t be drowned in it.”

He said, “People are getting on to Twitter as soon as they wake up until they go to bed in the night, they’re almost stuck to Twitter or Facebook. But at the same time, it’s a very, very important media. It’s a very important thing in one’s life. Everyone should be on it because they get information right from the source and fresh information, time to time.”

“So you can inform your ideas, your opinion, your mind through Twitter and Facebook. And it’s a revolution. It’s essential. At the same time, it should not be misused,’ he added.

Asked if his philosophy of compassion is compatible with the free enterprise system and capitalism, Sri Sri exclaimed, “Definitely, definitely. Capitalism without compassion will not lead to a just society.”

“Capitalism, you know, rich persons can be compassionate. The poor man’s compassion has no value.”

But Sri Sri argued, “Whether capitalism, communism, socialism, or whatever ism it is, secularism, no ism will work without humanism.”

'Scientific education should be combined with spiritual education' 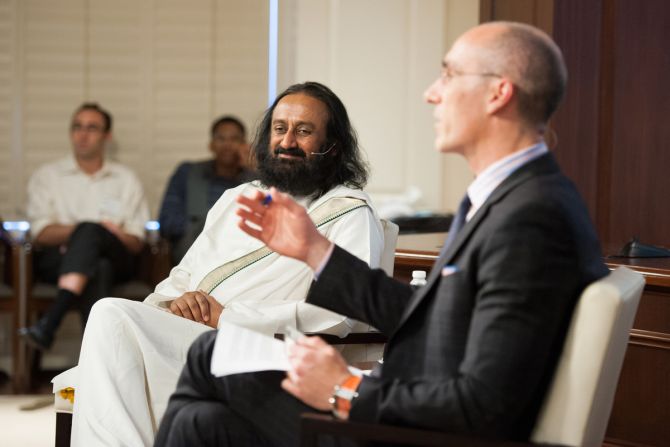 Sri Sri, to sustained applause, declared, “The heart of humanism is compassion. That’s essential. Without that nothing can work. Everything will be lame. And we found this throughout the world. There are ample examples. Whenever human values are found missing, all these isms remain just in books.”

Sri Sri also offered his panacea on how to counter terrorism and religious extremism that is on the rise in many parts of the world. He said it was caused by a “lack of understanding, lack of sense of belongingness, lack of trust between people, between communities, and probably misinterpretation of scripture.”

“I feel every child should know a little bit about all the world religions and start respecting them all. When you grow up with a broad mindset, terrorism can be nipped at the bud. So creating a sense of belonging, that’s why feel spirituality has a big role to play here.”

Sri Sri asserted that it was all about “uniting people of all religions and sects within a religion to come to an understanding that we’re all part of one universal human family. You know, it’s sense of identity which creates this sort of distinction between people that one feels that I belong to a particular sect and now I’m ready to sacrifice my life in order to hold on to that identity.”

“If I get a bigger identity, I’m part of the human society. If I hold on to that bigger identity, then most of this violence or suicide bombings that happen around the world, and terrorism would stop right away. Again, scientific education should be combined with spiritual education,” he said.

It was a strange forum for Sri Sri, who espouses peace and harmony through his Art of Living Foundation, which has chapters in over 150 countries, to be speaking at a think-tank, which is home to the leading neo-cons and hails the likes of former Vice President Dick Cheney, Richard Perle and other such hawks of foreign policy who have no qualms advocating military intervention to impose American-style democracy in particular countries. They have also been quite vocal that the US-India strategic partnership is imperative to counter and contain a rising China.

It was also obvious that Brooks was clearly not just an ardent follower of Sri Sri but virtually a devotee going by the way he gushed and seemed mesmerised by the guru's answers. Brooks introduced him as ‘the great spiritual leader of India,’ and a "revered global religious leader."