Dharma Nath Pachani is among the 1200 passengers on board the special train that left the Guwahati railway station on Saturday morning for Bengaluru, weeks after hate rumours had triggered a mass exodus of people from the north-east

The 28-year-old is raring to resume his work at NBC restaurant in Bengaluru.

Pachani, who hails from Morigaon in Assam, said, "I had been working in NBC restaurant in Bengaluru without any problem since 2003 before I rushed back home last month out of panic along with my friends. Now, I have decided to go back to my work as there is no problem out there in Bengaluru. I have called up my friends there who have suggested that I should return." 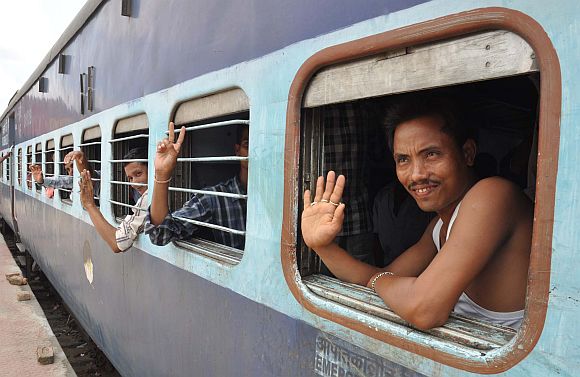 Ajoy Bora (19), who hails from Morigaon, is also returning with Pachani to Bangaluru to resume work at the same restaurant.

A source in the Northeast Frontier Railway informed that the 18-coach special train left Guwahati railway station at around 2:45 pm.

According to an estimate made by the Intelligence Bureau, about 500 passengers in the special train were those who had fled south India last month after getting panicky over threat SMSs doing the rounds there. The train will pick up passengers at six more stations within Assam. Two additional coaches were added to the train to accommodate those who had arrived in Guwahati to board the train without reservation. A railway official informed that more such special trains could be run if there is demand from passengers.

Some of those who were returning to Bengaluru by the special train were ticketless, as they were under the impression that it was being run only for them.

A senior state home department official said that many persons have already returned to their work places in southern states after becoming sure that nothing would happen to them after the concerned state governments had taken action to crack down on those responsible for circulating threat SMSes aimed at N-E people.