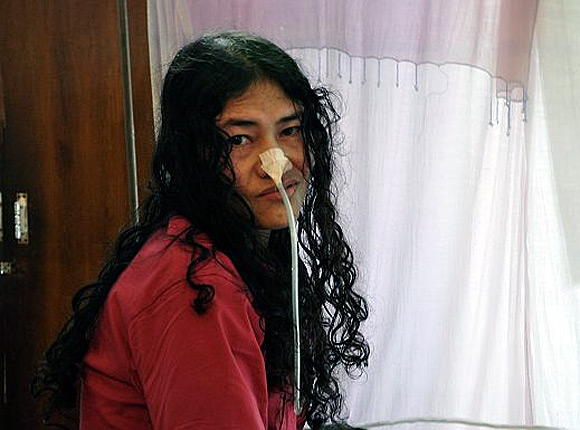 Today, Irom Sharmila, the Manipur civil rights activist, marks 12 years of her fast in protest against the Armed Forces Special Powers Act in the state. She remains in judicial custody where she continues to be force-fed through her nose.

Deepti Priya Mehrotra, author of Burning Bright: Irom Sharmila and the Struggle for Peace in Manipur, recalls her association with the Iron Lady of Manipur.

I met her initially in October 2006 in Delhi just to pay my respects. But I kept going back to her, and met her on multiple occasions in the months to come. I found that she was extremely friendly and takes great interest in people and things around her.

She is very attractive, and is very sharp, quick and reactive. We hit it off and started chatting the instant we met. She really wants to know so much. She asked me questions about myself and asked what I teach -- who were my students, how I travelled. I found that she preferred to do things the economical way; she would have preferred the bus.

She also started telling me about her own family. She is the youngest of nine brothers and sisters. She is very close to her family and extended family members who all live nearby in a village at the edge of Imphal.

She spoke very fondly of Manipur -- her motherland, her birthplace, and has a sense of deep commitment, passion and involvement for it. She is also very close to many people in different generations of her extended family. She was readily involved with what other people in her family did, like spinning. She also liked to walk, and used to cycle around in Manipur.

She told me about her early school days. She said she didn't like books in school.

Sharmila studied till class XII, and never went to college. The problem with text books, she said, was that they didn't tell her anything about real life.

I feel the violence she witnessed triggered her poetry. She just couldn't accept the violence and wanted to do something about it.

And then, one day, after the massacre at Malom village [an alleged encounter by Assam Rifles resulted in the death of 10 people in November 2000], she decided she had to do something. The next morning, she sought blessings from her mother and her elder brother, and the long fast began. I don't feel that she could have gauged how long the fast would be. I doubt if she still thinks about it.

But she surely is very fond of food. When I met her in a jail in Imphal in 2007, the first question she asked me was if I had tasted Manipuri curries. She said she would cook for me once and then explained the dishes and ingredients in much detail.

She does have some skills in cooking. She is a vegetarian, a rarity in her family and the community.

Coming back to her education, Sharmila never attended college even though she experimented with many options after school. She learnt tailoring, worked with a social group for blind children, but it was her assignment a month before taking up the fast that I believe led her to a very strong belief in what she was doing.

The human rights group she was part of trained her for a few weeks about the Armed Forces Special Powers Act, and then she went along with this team to meet a cross-section of people. I feel it must have brought her to a kind of boiling point. She saw rape victims, spoke to them, went to villages where people had disappeared. 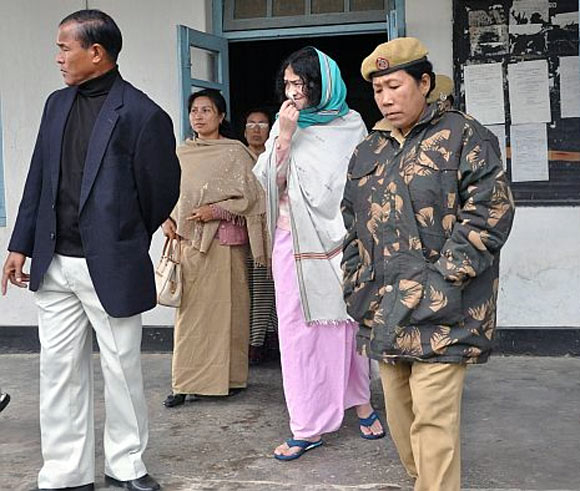 I feel that she also connected very deeply with the Meira Paibis, a group of old local women, who have traditionally saved the community from alcohol and drugs, and later from the atrocities by the armed forces. This group is very special to Manipuri society and is present in every village. I feel she felt very strongly connected to them.

But as a person, I often think of her as a very quiet girl, sitting quietly in a corner, observing, feeling and thinking, and taking everything in. She is a very vibrant person, very warm, polite and close to nature.

She was briefly shifted to Ram Manohar Lohia Hospital in Delhi in 2006, and could move around in a garden closeby. I remember one evening, she saw a squirrel and wanted to know everything about it.

During her stay in Delhi, I always found a pile of book neatly stacked next to her bed. Among those books was a Quran, the Bible, Upanishads, books on Buddhism, religion and poetry. She also read Manipuri newspaper and Japanese folk stories.

I think she was really happy when she was in Delhi, because she could meet people. But when she is imprisoned in Manipur, she is not allowed to meet anybody. I mean, she is arrested every year on charges of trying to commit suicide because she refuses to eat. She has not been arrested as a political prisoner.

And so she is imprisoned for a maximum duration of one year, freed for a few days, and then arrested again.

You would be surprised to know that she has neither spoken to nor met her mother ever since she undertook the fast. She believes that her mother would be very unhappy with her not eating and that might make her weak. Her mother has not met her for the same reasons.

There is a small hut a little distance away from the prison in Imphal. Each year she stays in that hut for while, before she is re-arrested. And her demand is a single sentence: repeal of the Armed Forces Special Powers Act in the state.

Lots of people suspect that people pressurise her to stay her on fast. Also because the fast has been very effective, there is no doubt that it brought international attention to the state and its people.

But I don't think she feels any pressure to continue it. The government and the authorities would love it if she breaks the fast. They will immediately grant her bail and close the case. It has become a big irritant for the government.

She feels that undertaking the fast is what she is meant to do in life. She believes deeply that that's her purpose, and that's what God wants her to do.

As told to Priyanka.