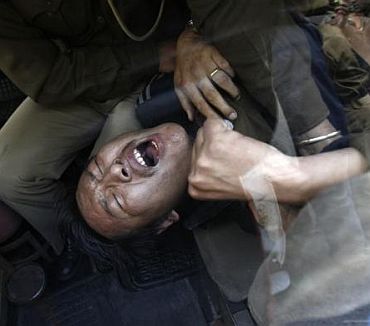 For India, Tibet is just one of the topics they may or may not raise during the ongoing visit of Chinese Premier Wen Jiabao. But for the fraction of Tibetans in exile settled in India, the talk regarding the status of Tibet is of paramount importance.

This is Jiabao's first visit to India after the 2008 'uprising' in Tibet. According to the Tibetans in exile, hundreds of Tibetans were killed during the peaceful protest all over Tibet.

Political commentators and experts feel that when it comes to policy making about India's stand on Tibet, it acts like a nervous neighbour instead of the superpower it claims itself to be. 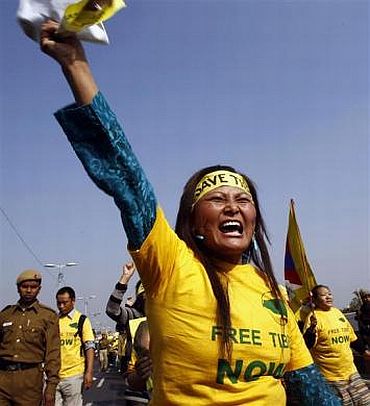 "For a long time, India has not been standing up to its claim of being a superpower. It acts like a nervous neighbour even to a country like Burma, let alone China. India has been silent towards Burma all these years, by saying that Burma has been helping in containing the insurgency in the northeast, but the fact is that Burma really has not helped India in anything," social activist Jaya Jaitley said.

Jaitley was speaking at a conference titled 'Rethinking India's Sino-Tibet Policy' on Wednesday to coincide with Jiabao's arrival.

Writer and Tibetan freedom activist, Tenzin Tsundue told rediff.com that when it comes to the Tibetan movement, India and Tibet should work together.

"India should work with Tibet for Sino-India relationship, which will not only benefit Tibet, but also India. China eyed Arunachal Pradesh and is now pointing fingers towards Kashmir. This should be stopped," Tsundue said.

'Most Indians do not even know about the Tibetan history' 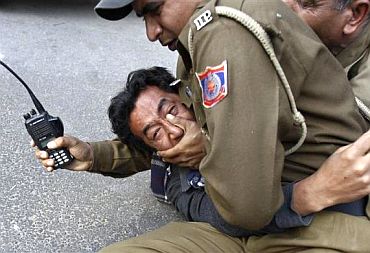 Tsundue said that most Indians do not even know about the Tibetan history.

"India originally shared border with Tibet before China invaded it. Today, most of the Indians do not know the history of Tibet or its struggles. I think India should at least initiate Tibetan struggle movement in its educational curriculum, so that people can have a better understanding of Tibet," Tsundue said.

Journalist and Sino-India relations expert, Vijay Kranti said, "What most of us don't realize is that China has used Tibet to encircle India. Indian policy makers have failed miserably for not understanding or acting on this for the past 60 years." 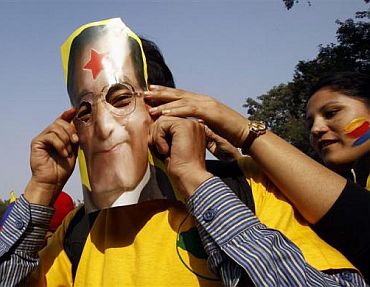 Analysts feel that India should change its policy towards China because China has successfully gained strategic influences on most of India's neighbours.

China's overt support to Pakistan and covert military supply, especially in the nuclear arms race build-up is mostly seen as a direct confrontation.

"In the early 1950s, India shared a 4000 kilometer border with Tibet, which was largely unmanned. A couple of policemen here or there would guard it, but they would only be armed with sticks. Indians would come freely into Tibet and Tibetans would freely go to India," Tempa Tsering, Minister, Tibetan Government in Exile and the New Delhi representative of Dalai Lama told rediff.com.

"Ever since the Tibetan invasion by China, there are military personnel from Chinese and Indian armed forces covering every inch of what once used to be a soft border. That is what China does," he added.

'The only thing that the Chinese recognise and respect is power' 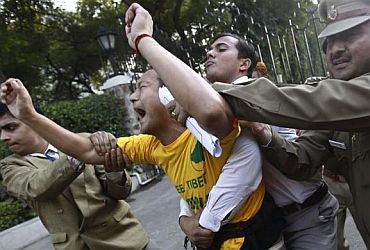 Describing China's greed for land as insatiable, Tsering said that China has problems with all its neighbours.

"The other thing that China does is that it instigates India's neighbours. India's relationship with almost all of its neighbours is strained because of China. The only thing that the Chinese recognise and respect is power. That is what India should do -- show its power," Tsering added.

'India has to take a realist stance on Tibet' 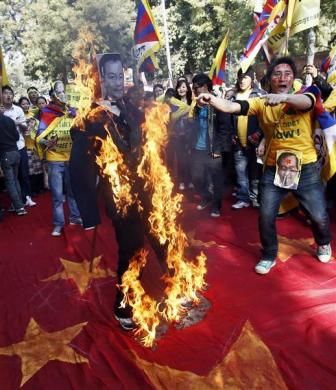 China expert and Centre of Policy Alternatives Director Mohan Guruswamy said that India could never go to war with China over Tibet.

"India and China are the world's most populous countries. They cannot go to war with each other for Tibet, which has a population of just six million. But what India should change really is its policy towards Tibetans born and brought up in India. They should be given the right to organize protest and carry out protest marches," he said.

"India has to take a realist stance on Tibet. India can be instrumental in initiating talks between China and the Dalai Lama. Another area where India should take a stand is bilateral trade. China is dumping goods in India. India can tighten some strings to put a check on this," Guruswamy added. 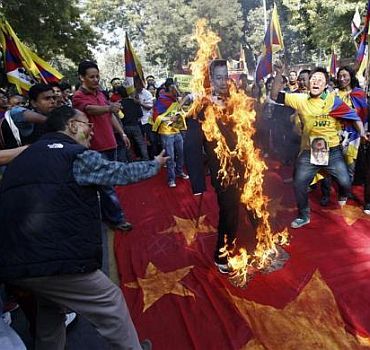 Jaya Jaitley said that if India did not do anything soon to change its stand on Tibet then China's policy will make India's northeast a cold desert.

"China has began building dams in rivers originating from China. If China dams the Brahmaputra river, our northeast will become a cold desert. Even our MPs have not raised this issue in the Parliament," Jaitley said.