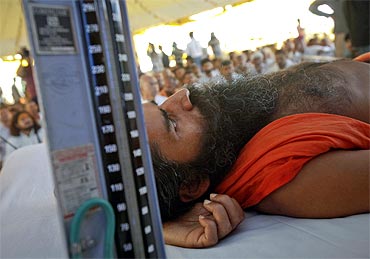 Spiritual leader Sri Sri Ravi Shankar on Saturday met Baba Ramdev and appealed to him to end his eight-day fast even as the health condition of the yoga guru showed signs of improvement.

The Art of Living founder made it clear that the Centre had not asked him to negotiate with 46-year-old Ramdev for ending his fast against black money and corruption.

'I am ready to do anything' 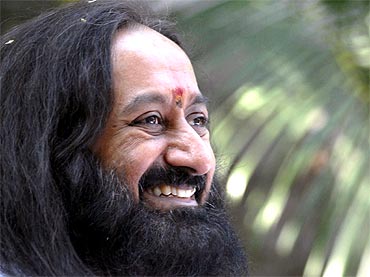 "Nobody in the central government has said anything to me and I have come here on my own. I will keep meeting him till he breaks it," Ravi Shankar said when asked if someone from the government got in touch with him on the issue.

"If the government wants, I am ready to do anything...whatever the nation needs," he told reporters after meeting Ramdev at the Himalayan Institute of Medical Sciences.

Ramdev, who was admitted to the Himalayan Institute of Medical Sciences on Friday evening after his condition deteriorated on the seventh day of his fast, was administered saline and glucose. 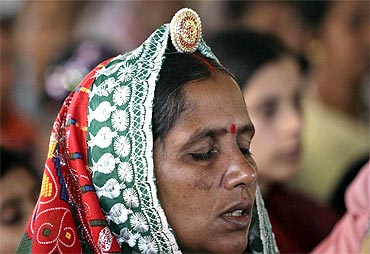 "Ramdev's blood pressure and pulse rate went down last night. But they have been brought under control. He is stable," Dr Deepak Goel, part of the medical team that is monitoring Ramdev's health, told reporters.

He said that Ramdev "was weak and has some problems in sitting and speaking."

A medical bulletin issued by the hospital said his pulse rate and blood pressure were stabilising slowly and there was an improvement in the health condition of Ramdev. 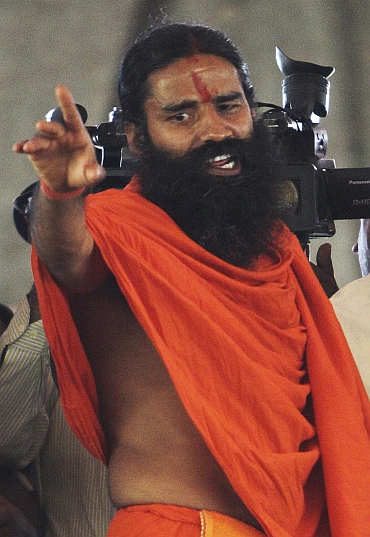 Asked whether there was a need to shift Ramdev to AIIMS in New Delhi, Goel said there was no need for that.

"He is not in the ICU. He is in a VIP ward next to it. He was given normal saline and vitamins. He was suffering from dehydration," the doctor said.

The yoga exponent was admitted to the ICU immediately after he was brought to the hospital.

Ramdev was admitted to the hospital as his health began deteriorating after he began his fast in his ashram in neighbouring Haridwar. 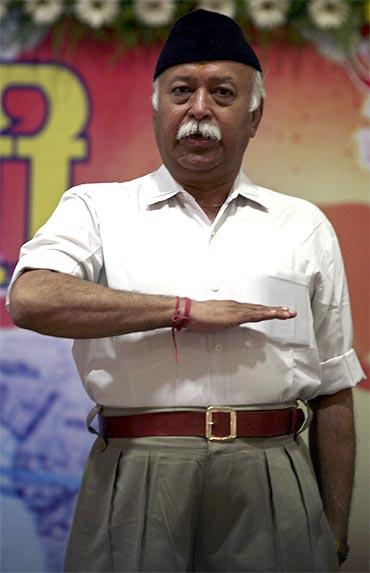 A Patanjali Yogpeeth spokesperson said that former President A P J Abdul Kalam called up Ramdev and asked him to break his fast.

In a statement, RSS chief Mohan Bhagwat said, "I appeal to Baba Ramdev to call off his fast soon and rejoin his movement for national regeneration. I can see this appeal reflecting the strong sentiments of millions of countrymen and I hope that Baba would certainly respond positively to their sentiments and feelings."

He said the news of Ramdev's deteriorating health and hospitalisation has caused great concern among people.

"People of the country are greatly beholden to Baba for his relentless campaign against corruption and black money that has awakened and inspired millions of citizens and stirred up their innate patriotism," Bhagwat said.

However, the country needs Ramdev's active leadership at this hour in the fight against corruption and hence he should give up his fast, he said.