Next
A Ganesh Nadar

A Ganesh Nadar visits the families of the two fishermen killed at sea by two Italian marines, who mistook them for pirates. On Tuesday the Supreme Court of India will hear arguments if the marines should be tried under a severe anti-piracy law or not.

Don’t hang them,” is the reaction of close relatives of the two Indian fishermen allegedly shot dead by two Italian marines on February 15, 2012.

The marines were on board the Italian-flagged Aframax oil-tanker MT Enrica Lexie when they opened fire on an Indian fishing trawler off the coast of Kerala. The marines, Massimiliano Latorre and Salvatore Girone, below, left, claim they mistook the fishermen for pirates. They are out on bail, but cannot leave on India. They did go back to Italy last year to vote in that country's elections, but returned as part of an understanding between the two governments. On Tuesday, the Supreme Court is expected to pronounce judgment on the legality of the marines being tried under a stringent anti-piracy law.

Ajesh Binki and Celestine Valentine were the two Tamil fishermen who were killed in the incident. All the fishermen on that boat were Tamils and belonged to Kanyakumari district though the boat had left from Kollam in Kerala.

Binki’s home is on the seashore, with a high wall of boulders protecting the village from the sea. It was built after the 2004 tsunami. Emmayanthurai village, where Binki’s family lives, is beautiful, with its own estuary. 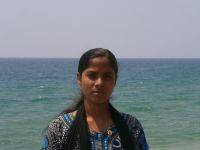 Binki’s sister Aguna, left, says she is 17 but looks 13. As a child, she lost both her parents and now her only brother, an unmarried youth of 20 years of age. “Lots of fishermen from here go to Kerala to work and come back after a month or more, my brother had gone many times,” she says.

She doesn’t mention the one trip from which he did not return and instead points to his picture on the wall. She now lives with her father’s elder sister and her husband. What is endearing is that she calls them amma (mother) and appa (father).

Her aunt Janet Marie looks weak. “Last week I was hospitalised and put on drips as I was very weak. Don’t worry, I won’t die before I get this child married. She is 17 and see how small she is. She has to put on weight before I even think of marriage.”

“She is a very moody child. She failed her tenth standard exams and so I put her in a tutorial. She failed twice after that. She doesn't retain anything in her mind, and always quiet. She is thinking too much, which is not good,” she said.

“We got money from the government and from the Italians. I gave half the money to her elder sister and got her married. She was strong like her mother. This one is like my brother, who was too thin.”

“Her money is safe in the bank. It will remain there till she gets married. I will fulfill my brother’s duty,” she starts crying, looking at her late nephew's photo.

Janet has been keenly following the case against the Italian marines, who are being tried in a Kollam court. “Hanging them will not bring my nephew back. We don’t want them to hang. They must be put in jail where they can think about what they have done.”

“They have taken two lives. By hanging them I don’t want their families to suffer as we are suffering. Let them be in jail and regret what they have done,” she said.

“The other nine fishermen, who were at sea that day in that boat, have become completely traumatised by the incident. They refuse to go to sea. They don’t know any other profession. Those families are suffering without any income. Even the boat owner has sold the boat,” she said.

Meanwhile, Aguna had sat quietly through this discussion. A lonely child and a lonely lady sit in a house facing the sea. Even in their loneliness and sorrow they repeat, “Don’t hang the marines, it won’t change anything here.”

Celestine was 48 when he was killed, and was originally from Rajakkamangalam in Kanyakumari district, Tamil Nadu. He married Dora from Moothakara colony in Kollam city, Kerala, and settled down there.

Dora lives in their house with two sons. Elder son Derek studies in an engineering college and Jean is in the sixth standard. After her husband’s death, Celestine's father stays with them.

She is a tough woman and keeps her emotions in check even as tears well in her eyes. “Celestine worked in Saudi Arabia for 16 years. Only recently he began working here. When he went abroad to work, I came to this house to live as his parents had expired before our marriage.”

“The government gave us some money and the Italians gave us Rs 1 crore. I got only Rs 80 lakh as the lawyers took the rest. I bought some land with that money as I knew it wouldn’t last if I kept cash,” she said.

“I have studied up to the 10th standard and the Kerala government gave me the job of an attendant in the fisheries department. This puts food on the table and helps me to educate my children.”

“Hanging the marines will not help. Their wives and children will suffer. We don’t want that to happen. They did it unknowingly. Hanging them will not bring my husband back. They must be punished with a jail term only,” she said.


Image: A photo of Celestine at his home
Photographs: A Ganesh Nadar

My aunt got married here and went to Rajakkamangalam, where she found my husband for me. She said he was a good boy and my family was happy with him. When he was not working he always sat at home. He did not have any bad habits. He used to give his entire pay to me. This house we bought with the money he earned in Saudi Arabia,” she said.

“Even my siblings are poor. I feel sorry for them but my kids are my priority. They all envy me because I got so much money. They cannot see that I have lost my husband and I am a widow now. All they see is the money,” she said.

“He used to say ‘I will take you all to Mumbai and show you the city, it’s a great place’. Now that will never happen,” she sighed.

“The marines have to spend a lot of time in jail. They have to regret the killings. What they did was wrong. We have taken money from them. We must be merciful,” she said.

“My son was playful when my husband was alive. Now he is more responsible. You may think the money has made me happy, but It has not. I would rather have my husband any time,” she says holding back tears.

Dora stared into the distance, determination writ large on her face. “I will complete my husband’s work.”