Bruce Reidel: 26/11 could happen again, even bigger and worse 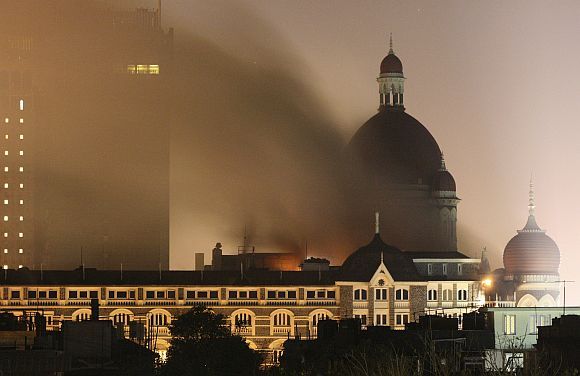 Image: The Taj Mahal hotel on the night of November 26, 2008.
Photographs: Arko Datta/Reuters

'Can India forever respond with restraint to attacks like Mumbai, the attack on the Indian Parliament? Maybe. But I wouldn't bet the future of the world on that,' former CIA veteran Bruce Riedel tells Rediff.com's Aziz Haniffa.

In Part I of his exclusive interview with Rediff.com's Aziz Haniffa, former CIA veteran Bruce Riedel felt India needs to think clearly about what kind of future it wants with a Pakistan that has the fastest growing nuclear arsenal in the world, and more terrorists per square mile than any other place in the world.

Part I: 'An India-Pakistan war in future would be Armageddon'

Rewinding to what permeated your previous book Deadly Embrace and has been discussed both in classified and unclassified briefings by the US military and other administration officials, in that Pakistan continues to play both sides in the war on terror.

Do you foresee any fundamental shift in Pakistan, or will it now be carte blanche once the US withdrawal from Afghanistan is complete?

The manner in which the United States and the NATO alliance leave Afghanistan will be very important.

If there is a precipitous withdrawal leading to the collapse of the Afghanistan State, it will be a resounding victory for the jihadist terrorist forces in South Asia.

They will trumpet it as a big victory, if not bigger than the defeat of the Soviet Union (who left Afghanistan in 1988).

We know what happened then -- we got Laskhar-e-Tayiba, we got Jaish-e-Muhammad, we got a whole phalanx of new terrorist groups and they turned to Kashmir.

If the American transition in Afghanistan is orderly and there is a residual NATO-American presence, and the Afghan State holds together, you will have a different outcome.

We know as Americans, what happens when we cut and run from Afghanistan. We cannot afford to make that mistake again.

I think the path that President Obama is on is to ensure that there is no reckless departure from Afghanistan.

'The burden is on the Indians and the Pakistanis' 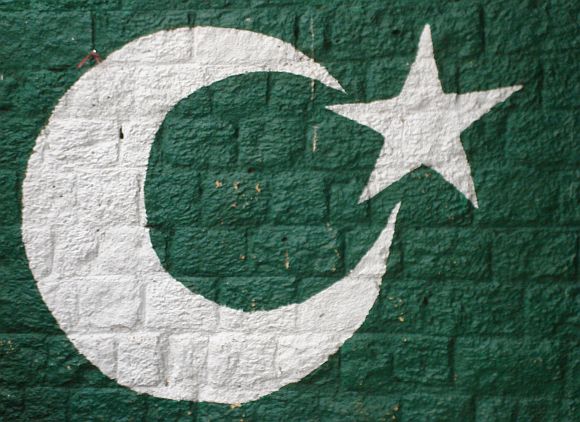 Image: The Pakistani flag painted on a wall in Islamabad.
Photographs: Reuters

With regard to some of the recommendations in your book, what role do you believe the US should play in South Asia?

Some have suggested a point person assigned to carry forward the defence relationship. But we know what India's reaction will be if a trouble-shooter is to be appointed -- as when Richard Holbrooke's original portfolio was to include India too, which meant attempting to resolve the Kashmir issue too. India went ballistic.

How would the US fit if it were to make sure an Armageddon never happens?

The thrust of my argument is not a Made-in-America solution. We can make it worse.

Looking back over the last 70 years of American diplomacy in South Asia, it's easy to say that we can make the situation worse by backing dictators like Zia-ul Haq or Pervez Musharraf.

The burden is on the Indians and the Pakistanis. It does not make sense to have an American facilitator or an American mediator. I want to see an Indian mediator.

I want to see Indians and Pakistanis do these things and then the United States can support these efforts.

We can help in the United Nations for example, any agreement for example to resolve Kashmir, which will need a Security Council blessing at some point. We can help there.

We can be a cheer-leader, but we should not be trying to do a Dayton or a Camp David.

'Kerry has a very, very, realistic understanding of Pakistan and the double game it's played' 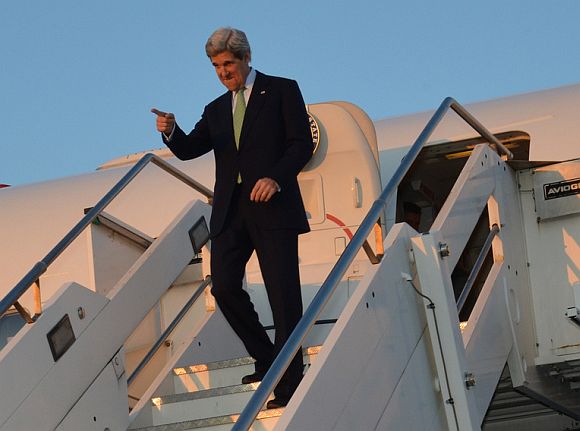 Now that Senator John Kerry has taken over from Hillary Clinton as the Secretary of State, what role should he play?

Notwithstanding his foreign policy credentials, there are concerns about where he stands in some quarters in New Delhi. That he has acquired a sort of pro-Pakistan bias in recent years -- what with his massive aid legislation to Pakistan, etc without conditioning it adequately on ISI's support of terrorism against India.

The first thing that Secretary Kerry should do is re-unite the subcontinent. We should build a strong South Asia bureau -- put Afghanistan, Pakistan and India back into one organisational framework.

If you don't think about South Asia as a whole, you end up making mistakes. The first step should be a holistic approach.

If you want to address the issues that create Pakistani behaviour you don't like, you have to think about why Pakistanis do these things. So, that's where he should start.

I have briefed the Senator many times and I believe he has a very, very, realistic understanding of Pakistan and the double game it's played for a long time.

Should Kerry make sure a person with a lot of gravitas heads up this bureau, where he or she can operate knowing that Kerry and the President have his or her back?

Bob Blake (Assistant Secretary of State for South Asian Affairs Robert O Blake) was an experienced and savvy diplomat and liked by all in South Asia, but with the creation of the office of the Special Representative for Afghanistan and Pakistan with a bulldozer like Rich Holbrooke, it diminished any influence and policymaking role he could play.

Then there is also the National Security Council at the White House sans anyone with real experience in South Asia, also getting into the mix.

Absolutely! My argument in the book is that if there is one place in the world where we could have a nuclear war in our lifetime, it's in South Asia.

Seems to me America needs its number one diplomats working on that problem. 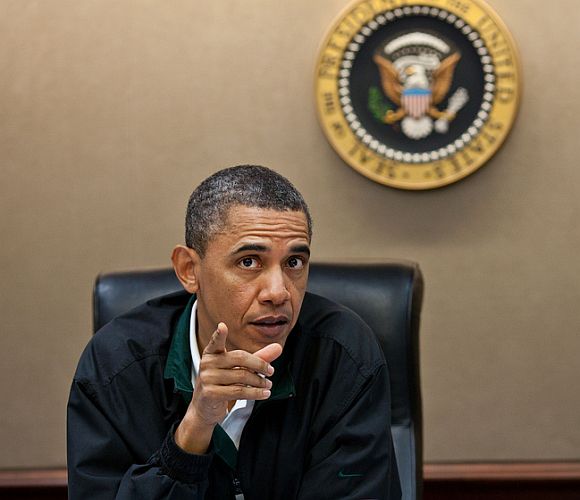 In your book, you delve comprehensively into the 2008 Mumbai attacks. Is it the heart of your argument of America, India and Pakistan to the brink and back and as close to Armageddon in recent years?

The Mumbai attack was the first major crisis on Obama's watch. He was not even inaugurated yet. He had been elected.

It was an extremely complex plot. Three parties were involved -- Lashkar-e-Tayiba, very obviously the ISI, and the least observed, Al Qaeda.

It had the potential of taking the region to the brink of war again. It is a role model for how the dark forces in Pakistan play.

It could happen again, even bigger and worse, and probably will if we leave the course of events as they are today.

Can India forever respond with restraint to attacks like Mumbai, the attack on the Indian Parliament? Maybe. But I wouldn't bet the future of the world on that.

But Pakistan's nuclear weapons capability has provided it with credible deterrence against any response India may intend?

So far! (But) Do you want to bank the future on that?

The balance between the United States and the Soviet Union worked, but there were many periods during the Cold War when it looked like it was about to fail.

We have been blessed with two Indian prime ministers who have done the right thing. We were blessed in this country on October 1962 with John F Kennedy, who did the right thing.

(But) In all of those cases, there were many other voices urging a course of action, which would have been disastrous. It seems to me there is a better approach.Can India forever respond with restraint to attacks like Mumbai, the attack on the Indian Parliament? Maybe. But I wouldn't bet the future of the world on that.

Rather than going to the brink, over and over again, let's build an alliance in South Asia.

Let's bring India and Pakistan and Bangladesh, Afghanistan and the rest into an economic trade partnership, which would be brighter for the nation, for the individuals.

South Asia could be as it was back in the era of the glory days of the Mughal empire -- the wealthiest, most progressive place in the entire universe. 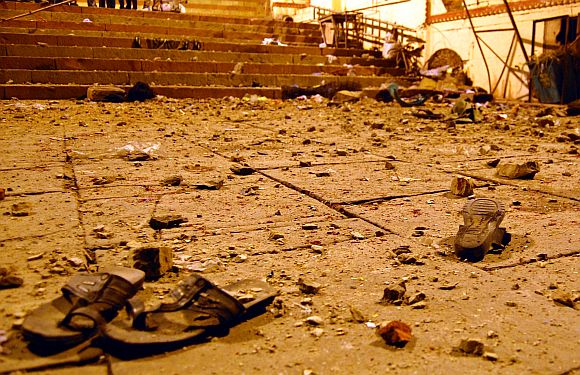 Image: 'India is a big country and has a wealth of terrorist and militancy problems'
Photographs: Reuters

Following the twin blasts in Hyderabad, there are strong rumours that this was the latest manifestation of home-grown terrorism in India.

Is India in denial about home-grown terrorism, or do you believe that all the acts of terrorism there lead back to Pakistan and/or outside forces?

India is a big country and has a wealth of terrorist and militancy problems. The Maoist problem is not Pakistan-inspired.

But the difference is the Maoist problem is not going to create a terrorist incident that leads to a confrontation with another nuclear-armed State.

The fact is, there is really no other place in the world, where you have two, nuclear-armed States who don't have an agreed-upon border between them and one of which sponsors repeated terrorist attacks on the other's capital and major cities. That is a unique situation.

The Indian government has wisely tried to see if it can engage Pakistan to change this. It needs to try even harder about how do they help Pakistan become a normal country.

It's not easy to do -- there may not be a good answer. But, it is an urgent requirement.

Finally, coming back once again to something you spoke of at the launch of Deadly Embrace and in previous interviews that this simmering, volatile situation in Pakistan, is not just dangerous to that country and could result in its implosion, but to the cementing of a Indo-US strategic partnership.

Do you still hold on to that view?

The US and India need to, in their bilateral strategic level discussions, have a conversation -- a long and extensive conversation -- about Pakistan. That is the core of the danger in South Asia.

It's the dysfunctional nature of the Pakistani State.

What point is there to Indo-US strategic dialogue if we don't talk about the biggest problem in the area?

That doesn't mean ganging up on Pakistan. That means trying to think of creative ways to help the progressive forces in Pakistan win the battle for that country's future.

'Do India and Pakistan want to keep risking disaster?' 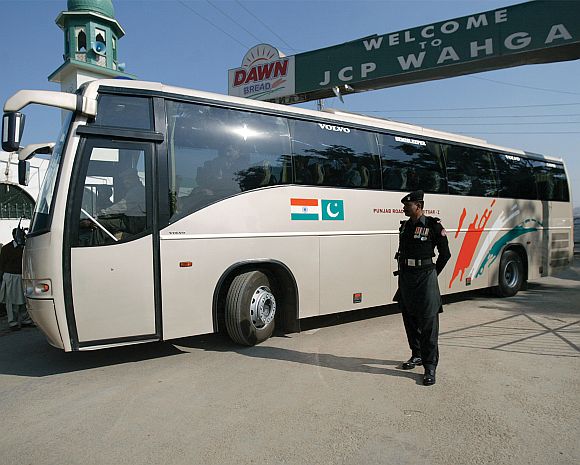 But how do you deal with that when Pakistani paranoia only increases correspondingly the more this Indo-US strategic partnership gets cemented?

The answer to the question of how do we reassure reasonable voices in Pakistan is through engagement.

We shouldn't keep the dialogue that we are having about Pakistan with India secret. It should be out in the open.

Again, it shouldn't be ganging up on Pakistan; it should be how we can find a way to move India and Pakistan out of the toxic relationship that they've been stuck in now for so many decades into a productive relationship.

Smart and wise thinkers in India and increasingly some in Pakistan see this: How can we help?

At a minimum, how can we avoid doing any harm?

Does this mean encouraging more Track-II diplomacy, people-to-people connections, perhaps helped, even sponsored by the US?

Helped, absolutely, but I don't think it can be sponsored. We don't get to decide Indian visa policy or Pakistani visa policy.

But imagine a world in which Indians and Pakistanis could cross the border without a visa. A world in which they jointly invested the entrepreneurial talent of the Indian and Pakistani people, which fused together could be a nirvana. That's the choice.