DMK son rise: When will Stalin take over party reins? 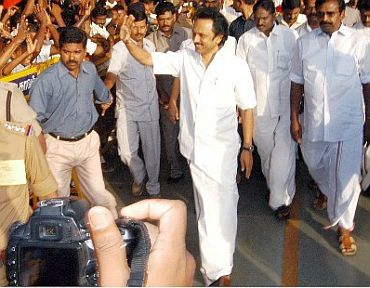 M K Stalin might not have his father's charisma, but he has learnt the ropes the long, hard way, says T E Narasimhan

In 1953, the year Russian communist leader Joseph Stalin died, another Stalin was born in India. The child was named so by his father, Stalin-admirer Muthuvel Karunanidhi, the powerful leader of Dravida Munnetra Kazhagam (which means Dravidian Progressive Federation), or DMK.

Nearly six decades later, Karunanidhi has announced that it's M K Stalin, and not his elder son M K Alagiri, who will be his political heir. But the patriarch of the extended family of politicians hasn't specified when he'll hand the baton over.

A disgruntled Alagiri has hit back saying that he will not accept anybody, but for his father, as leader. He has also said, "DMK is not a mutt for anybody to nominate." In the past, every time Madurai-based Alagiri, who's the union minister for fertiliser, would head for Delhi, he would do so usually after paying his respects to his father in Chennai. This week he was in Chennai for two days, but the father and son did not meet. Stalin, meanwhile, has reacted to neither his father nor his brother's statements. But then he's known to steer clear of controversy.

Stalin was barely a teenager when he made his interest in politics evident. His first major showing was in 1967 during the anti-Hindi agitation, the year in which DMK ousted the Congress to rule Tamil Nadu from Fort St George, the state secretariat. Stalin, then 14, campaigned for his uncle, Murasoli Maran, who was contesting for a Lok Sabha seat.

Six years later, in 1973, after graduating in history from Presidency College, Chennai, 20-year-old Stalin was formally inducted into DMK's general council. The following few years were going to be those of political turmoil for India. Indira Gandhi imposed Emergency and the DMK government led by Karunanidhi was dismissed on charges of corruption. Stalin, too, was arrested in 1976 and spent a year confined in an 80 sq ft prison cell. On several occasions, he proudly shows the marks on his body and proclaims that these are the scars of democracy.

'Compared to his father, Stalin is seen as more moderate' 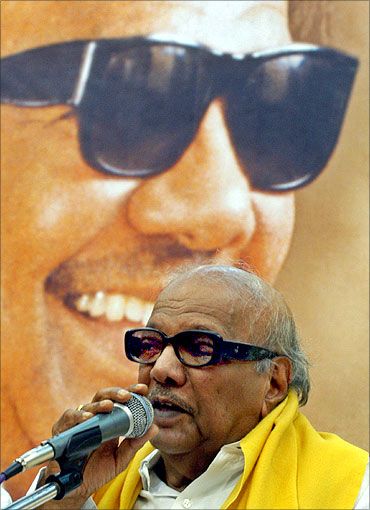 Emergency ended in 1977, but DMK lost to actor-turned-politician M G Ramachandran, or MGR, who had broken away from the party to start his own, All India Anna Dravida Munnetra Kazhagam, and ruled the state for the next 10 years. It's AIADMK's current supremo, Tamil Nadu Chief Minister J Jayalalithaa, who will most likely be Stalin's biggest rival if and when he takes over. However, unlike his father, Stalin has displayed no open animosity towards Jayalalithaa. While Karunanidhi makes special efforts not to come face-to-face with her, Stalin broke that barrier some years ago. "He visited her along with senior party leader K Anbazhagan to hand over the party's donation for tsunami relief," says Gnani Sankaran, Tamil writer and political analyst.

Compared to his father, Stalin is seen as more moderate. You won't hear him pick up the Aryan versus Dravidian issues the way Karunanidhi does. However, on more than one occasion, Stalin has made it amply clear that he stands by the Tamils, though he's never been as fiery or vocal as Jayalalithaa in raising their issue. In November, he handed over the resolutions adopted during the recent Tamil Eelam Supporter's Conference to United Nations Deputy General Secretary Jan Eliasson in New York and requested the international body to treat the human rights excesses in Sri Lanka as a "global issue" and not something confined to the island nation. 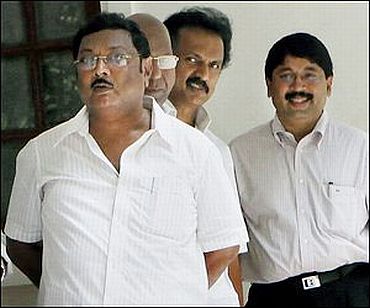 It's been a long journey for Stalin who fought his first election from the Thousand Lights constituency in Chennai in 1984, but lost by a narrow margin. The years that followed found him in political wilderness. During this period, he tried his hand at acting and starred in two serials: one for Doordarshan and the other for Sun TV. Some people still recognise him as Soorya, the lead actor in the serial by the same name. Stalin's son, who is in his 30s, has, in fact, chosen acting over politics.

Stalin's political fortunes changed in 1989, two years after MGR's death, when DMK won by a handsome margin riding the anti-Rajiv Gandhi wave which had swept the country. Stalin won from Thousand Lights, which has since elected him four times over.

He was labelled a youth icon and came to be called 'Ilaya Thalapathi', or 'Young Commander'. At 59, he's still called that.

Stalin was now chosen over senior DMK leader V Gopalsamy, popular as Vaiko, to get DMK back on its feet. The second milestone came in 1994, when Vaiko was ousted from DMK, paving the way in the party for Stalin. During this time, Karunanidhi asked Alagiri to move to Madurai to deal with the dissidence that had broken out there. Partymen say this was the first sign that Karunanidhi wanted Stalin, and not Alagiri, by his side.

Two years later, DMK got decimated again following the sympathy wave after Rajiv Gandhi's assassination. Only two DMK MLAs were elected to the assembly. Stalin was one of them. Then in 1996, he was made mayor of Chennai and it wasn't long before people started calling him 'Managara Thanthai', or father of the city. He privatised garbage clearance, worked on improving the city's infamous public transport system and got about a dozen flyovers and mini-flyovers built. "Before this, his image was that of a spoilt son of a political leader," says Sankaran. "Becoming mayor repositioned him as a serious party organiser and he got noticed by the educated middle-class."

But this didn't ensure DMK a victory in 2001. AIADMK, which came to power, jailed him, Karunanidhi and the ailing Murasoli Maran on charges of corruption. Things also started to sour between Alagiri and Stalin. And in 2003 Alagiri was arrested for the murder of P T Krittinan, a Stalin supporter.

When DMK came back to power in May 2006, it is said it was due to Stalin's efforts. "He listens to us before taking any decision," says a party functionary. He's a good organiser and always listens to the DMK supremo and party leaders, adds T K S Elangovan, MP and DMK spokesperson. Karunanidhi too consults him before taking any decision, Elangovan says.

In a state where political leaders are practically worshipped and are given larger-than-life forms in exaggerated posters and flux boards, Stalin stands out as an exception. If it comes to his notice, any poster portraying him as a military general, god or a historic character is promptly pulled down.

'Stalin lacks the oratory skill of his father' 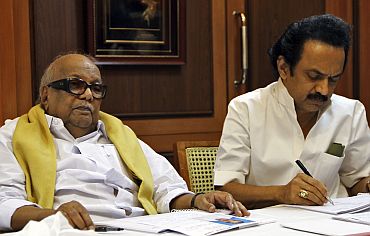 To an extent, Stalin also micro-manages affairs. If he is organising a conference, he will visit the hall two days prior to the event, offer suggestions, point out mistakes, ensure deadlines are kept and plan out who would speak in what order. When he was mayor, he would cover one area of the city a day, identify its problems and work on how to solve them. About six months later, he would revisit that area to see if things had improved.

In 2009, Karunanidhi, then the chief minister, made Stalin the deputy chief minister. Now, since he has announced that Stalin will succeed him, the party headquarters, Anna Arivalayam, has been busy with DMK workers making a beeline to seek his "blessings".

Some, however, feel that Karunanidhi might still change his mind. Cho Ramaswamy, editor of Tamil magazine Thuglaksays, "I don't see any finality about it. Kalaignar goes on changing his strategy. Depending on the family circumstances and the intensity of opposition, he will go on changing his stance."

What Stalin also lacks is the oratory skill of his father, something he would need when he faces a leader as formidable as Jayalalithaa. He has also failed to make an impression in the assembly, especially in debates. "One reason could be lack of confidence. That could be because he's still in his father's shadow," says Sankaran. Considering that the party was formed for the youth and Karunanidhi himself became chief minister at the age of 44, "he should have handed over the control to Stalin when he was much younger."

Karunanidhi is 89. Stalin is close to 60. And it's still not certain when the change of guard will take place.