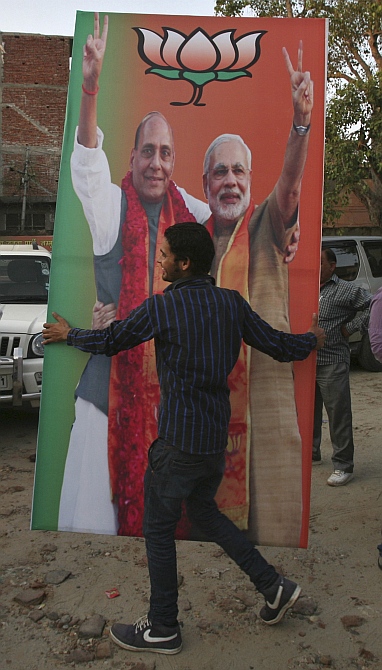 Image: An activist of the Bharatiya Janata Party carries a hoarding featuring Gujarat Chief Minister Narendra Modi and Rajnath Singh, president of the BJP, during celebrations before Modi was crowned as the prime ministerial candidate for the party, in Jammu
Photographs: Mukesh Gupta/Reuters

More than any other party, the BJP can figure out exactly what is likely to infuriate and mobilise their core voter, says Mihir S Sharma

At some point, you have to just lose yourself in admiration for the strategists of the Bharatiya Janata Party. More than any other party, and definitely far more easily than the aristocratic, out-of-touch planners for the Congress, they can figure out exactly what is likely to infuriate and mobilise their core voter.

Take, for example, the wonderful words "love jihad". This is the idea, first developed in the Rashtriya Swayamsevak Sangh's southern "laboratory" of Mangalore, that young Muslim men gather in packs, wear colourful shirts and pass around the hair gel, and then dash off on snazzy motorbikes, humming Salman Khan songs, to woo young Hindu or Christian women in order to convert them to Islam.

Karnataka's BJP government informed people that "this appears to be a serious issue" -- unlike, say, illegal mining -- and put a special detachment of the Crime Investigation Department on the case.

Now, of all the forms of jihad the Right would like us to worry about, this might seem the most harmless. Unless, of course, you believe the Honour of a Community is Borne By its Girls and stuff like that. Which, it turns out, the Sangh Parivar imagines large numbers of prospective voters do, and so it has happily tried to replicate its southern experiment elsewhere.

Having younger politicians would not help at all 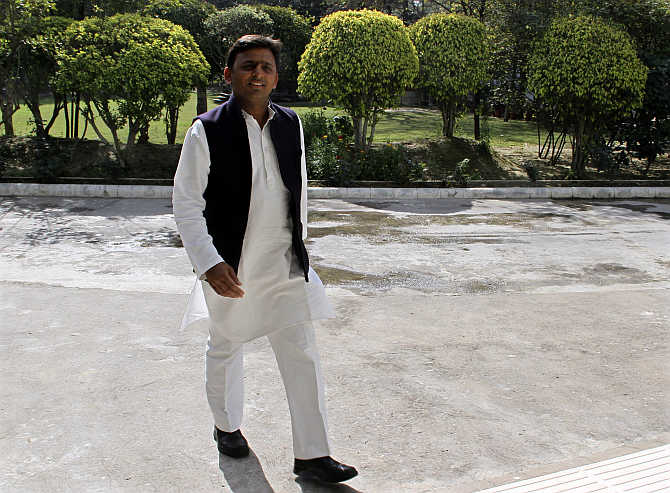 Image: Akhilesh Yadav in Lucknow. The chief minister has admitted that 27 communal clashes have taken place in the state since he took over.
Photographs: Pawan Kumar/Reuters

More than one person has told me that local Akhil Bharatiya Vidyarthi Parishad and BJP activists in Delhi monitor the notices of upcoming inter-religious marriages that are required to be accessible under the Special Marriage Act; if the girl's name sounds Hindu to them, they go and complain to, or otherwise harass, her family.

It turns out, to the surprise of absolutely nobody, Jat-dominated Western Uttar Pradesh is the most fertile ground for this. According to the Vishwa Hindu Parishad's Ashok Singhal, the khap mahapanchayat that was held in Muzaffarnagar on September 7, after which almost 40 people have been killed in religious violence, was a "Bahu beti bachao mahapanchayat" -- a grand assembly to save the girls of the house. (Though many would say, if the girls of the house need saving, it's from the khap.)

Actually, the video was from somewhere in AfPak, with Muslims murdering other Muslims. Two things are worth noting immediately: first, it is impossible to underestimate the intelligence of the average Indian internet user; and, second, can we stop wailing that our politicians are too old? Judging by Som, having younger politicians would not help at all.

Modi hasn't talked about Muzaffarnagar -- yet 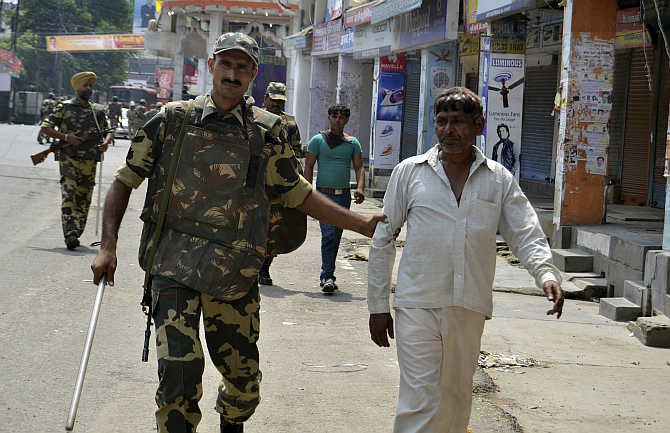 Image: Soldiers detain two men for questioning during a curfew in Muzaffarnagar. About 50 people have died in in the communal violence
Photographs: Stringer/Reuters

And what followed the mahapanchayat, a similar meeting after Friday prayers, and various mislabelled viral videos and altered photos of newspaper headlines? The VHP's Singhal told The Hindu: "What has happened after that is the reaction on the lines of post-Godhra in Gujarat. Hindus did not sit back."

Singhal's invocation of the most glorious moment in the recent history of Hindu nationalism is, perhaps, not a coincidence. Youth Icon Sangeet Som paused in his headlong flight from arrest to call Hindustan Times and tell them that he would arrange for a Narendra Modi rally in Muzaffarnagar at the earliest opportunity.

Nothing can calm the flames of religious violence like a Modi speech, and a few well-chosen dead puppy metaphors. Other politicians hand out free food at rallies; Narendra Modi charges Rs 5, but hands Muslims "back presents" of burqas and skullcaps, and suggests they put them on.

A Delhi-bound Modi hasn't talked about Muzaffarnagar yet -- which is amazing in a way, since he is willing to talk about all sorts of things he doesn't quite understand, like the rupee or relations with Bangladesh. Perhaps he's just preoccupied with his coronation.

But while I wouldn't for a moment want to underplay the culpability of the Samajwadi Party, whose rule of Uttar Pradesh has always been notable for its tolerance of thuggishness and violence, it is difficult not to note that, coincident with Modi's rise in the BJP, there's been a startling outbreak of religious violence across north India, from Jammu to Uttar Pradesh to Bihar.

Blood is good for business 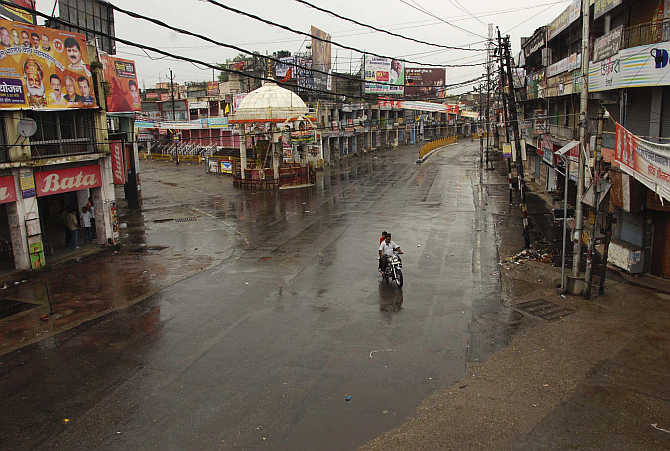 Image: A man rides his motorbike on a deserted street during curfew in Muzaffarnagar. Political parties have exploited the situation to secure their vote
Photographs: Stringer/Reuters

As I said, the BJP's planners are brilliant, brilliant men. Without a sharply increased number of seats in UP, and a good performance in Bihar independent of former partner, the Janata Dal-United, Modi doesn't stand much of a chance in 2014.

And they know just how to make that happen. If, in the process, the Congress' ally and Jat leader Ajit Singh finds himself in a tough position, so much the better.

After all, what's the downside of religious polarisation for a Modi-led BJP? As the minuscule fallout of the letter written by Gujarat's former head policeman and current prisoner D G Vanzara shows, Modi's mantle of blood and smoke doesn't bother those who've made up their mind to vote for him.

More darkly amusing, however, are the excuses made by those who feel slightly guilty about Modi-sympathy.

Such as the claim that poor Modi is basically just a misunderstood development visionary. Or that the Congress did 1984, so what's the fuss? (Sorry, but I'll only think that's relevant when I see a spate of attacks on Sikhs by Congressmen across north India in 2013.)

Given cover by these excuses from those who know better, the smart men of the BJP will proceed with their master plan. And after the BJP comes to power, I'm sure the economy will revive instantly -- because who doesn't want to invest in a country throbbing with the potential for internecine violence?

Blood is good for business.