Difa-e-Pakistan Council: Another Frankenstein to irk US 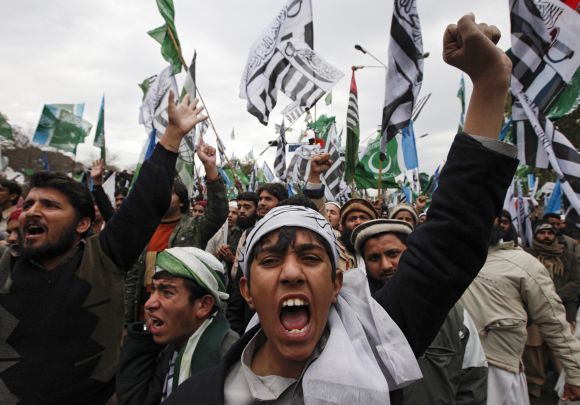 Image: A supporter of a religious and political party chants slogans with hundreds of others during an anti-US rally organized by the Difa-e-Pakistan Council in Islamabad
Photographs: Faisal Mahmood/Reuters Amir Mir in Islamabad

The declared agenda of the Difa-e-Pakistan Council is to oust the United States from the region, break Pak-US ties, back Taliban militants, force the government to revoke the Most Favoured Nation status being granted to India and stop the NATO supplies pass through Pakistan. But that's not going to benefit Pakistan, writes Amir Mir

The increasing activities of a recently formed religious and militant parties' alliance -- Difa-e-Pakistan Council -- has invited the wrath of United States state department which has expressed serious concern over the appearance of Jamaatul Daawa ameer Hafiz Mohammad Saeed in the continuing anti-US rallies being staged across Pakistan.

The US state department has reminded Islamabad that the JuD was simply a front for the Lashkar-e-Tayiba which had been banned by the United Nations Security Council and the United States in the aftermath of the 26/11 Mumbai terrorist attacks, invoking international sanctions.

The outgoing director general of the Inter Service Intelligence Lt Gen Ahmed Shuja Pasha is considered to be the moving spirit behind the creation of the Difa-e-Pakistan Council which is yet another dummy alliance of religious parties aligned with jehadi non-state actors.

Pakistan's intelligence establishment had been creating such alliances even in the past with a view to fight covert wars in the neighbouring states of India and Afghanistan.

The council, which is an umbrella of around 40 banned jehadi outfits and religious groups, seems to have been unleashed by the country's security establishment because of Pakistan's fraught relationship with the United States in the aftermath of the November 26 killing of 25 Pakistani army soldiers in a NATO airstrike targeting the Salala check post on the Pak-Afghan border.

The council has been holding public meetings and rallies in major Pakistani cities for the past month, announcing that force will be used to spread Islamic ideology in the country by suppressing anti-Islamic, secular and liberal elements. The council is being led by Maulana Samiul Haq, the ameer of his own faction of Jamiat Ulema-e-Islam while some key components include the suspected mastermind of the 26/11 Mumbai attacks Hafiz Mohammad Saeed's JuD, Al Qaeda-linked Harkatul Mujahideen (that has already been renamed as Ansarul Islam) led by Maulana Fazalur Rehman Khalil, the banned Sipah-e-Sahaba Pakistan led by Maulana Mohammad Ahmed Ludhianvi (which has already been renamed as Ahl-e-Sunnat-Wal-Jamaat), the Jamaat-e-Islami Pakistan led by Munawwar Hassan (which openly and publicly extends all moral support to Taliban in Afghanistan and jehadis in the Indian administered Jammu and Kashmir), former ISI chief Lt Gen (retd) Hameed Gul and last but not the least, Ejazul Haq, the elder son of a former military dictator General Ziaul Haq.

Difa-e-Pakistan Council may be a new name, but its roots lie in the movement started by its current chairman in the wake of attacks on Afghanistan by the US-led allied forces.

"At that time our brothers needed our support against the American crusade, so we took a stand for them," says Samiul Haq, the 75-year-old former member of the Pakistan National Assembly.

The group he made at the time was known as Council for Defence of Afghanistan and Pakistan. But before the 2008 general elections in Pakistan, Samiul Haq had converted the same into an election alliance -- the Mutahidda Majlis-e-Amal -- which eventually formed the provincial government in Khyber-Pakhtunkhwa under the Musharraf regime.

Samiul Haq also runs a religious seminary whose students had carried out the December 27, 2007 assassination of the twice-elected former Prime Minister Benazir Bhutto in Rawalpindi.

The declared agenda of the Difa-e-Pakistan Council is to oust the United States from the region, break Pak-US ties, back Taliban militants, force the government to revoke the Most Favoured Nation status being granted to India and stop the NATO supplies pass through Pakistan.

'It was hard to spot a Pakistan flag' 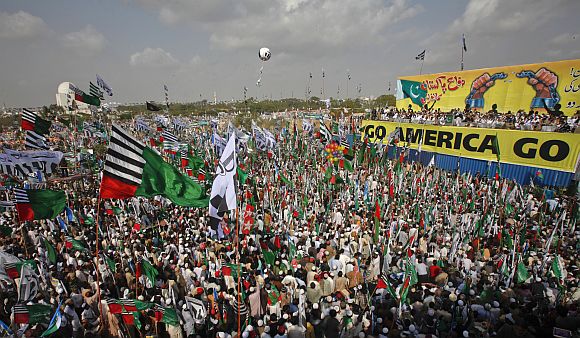 Image: Hundreds of supporters of different religious and political parties hold their parties flags while taking part in an anti-American rally organised by the Difa-e-Pakistan Council in Karachi
Photographs: Athar Hussain/Reuters

As several quarters in Pakistan join the chorus to condemn a bill on Balochistan moved in the US Congress recently, thousands of the Difa-e-Pakistan Council supporters rallied in the federal capital Islamabad on February 19 against the growing American intervention in Pakistan.

It was hard to spot a Pakistan flag in a huge gathering of hardline Islamic groups. The participants stood united in extending protection to Islamic militants and hatred of the West. The gathering was the fifth in a series of public rallies in the major cities of Pakistan.

"Today, we have gathered here to raise a voice of protest against US intervention in Pakistan," Maulana Samiul Haq told the participants of the anti-America rally who had gathered at Aabpara Chowk in the federal capital. "America wants to break Pakistan into pieces," Samiul Haq said, in reference to a resolution introduced by Congressman Dana Rohrabacher which called upon Pakistan to recognise the right of the people of Balochistan to self determination.

However, like the four previous rallies, Hafiz Mohammad Saeed did not participate in the Islamabad sit-in, after being barred by the government from entering Islamabad in the wake of the protest lodged by the US State Department a day earlier (on February 18).

US wants Pak to act against Saeed 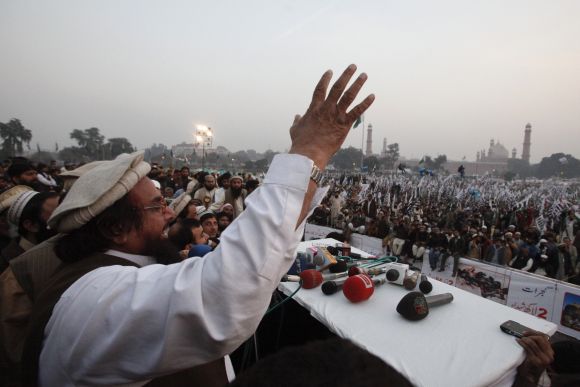 Image: Hafiz Saeed speaks to gathering during an anti-American and Indian rally on the grounds of the Minar-e-Pakistan in Lahore
Photographs: Mohsin Raza/Reuters

Addressing the previous rally of the council held in Karachi on February 4, Hafiz Saeed bitterly criticised the United States, maintaining that it was leaving Afghanistan after suffering a disgraceful defeat at the hands of the Taliban.

"Our protest is against the occupation of Jammu Kashmir by Indian security forces and a possible resumption of the suspended NATO supplies to Afghanistan", said Saeed amidst loud slogans of "Death to America", "Go America Go", "No to Nato", etc.

Taking serious notice of Hafiz Saeed's anti-US rhetoric, the US state department said the next day (on February 19) that Pakistan is a signatory to the United Nations Security Council Resolution 1267/1989, which calls for all countries to freeze assets of sanctioned groups and prevent sanctioned individuals from entering their territories.

It further asked the Pakistan government to take notice of the unchecked activities of Hafiz Saeed and his JuD which is emerging as a wider jehadi threat taking inspiration from Al Qaeda.

According to some well informed diplomatic circles in Islamabad, several high ranking US military and government officials, during their recent visits to Islamabad, described the JuD/LeT as a potent terrorist outfit construed as a threat to the United States.

They further demanded that the Pakistani security establishment should proceed against the Saeed-led outfit to dismantle its vast jehadi infrastructure. While acceding to an Indian request on December 11, 2008, UN Security Council designated JuD as a global terrorist organisation, describing it as the frontal organisation for the Lashkar-e-Tayiba.

The Security Council's Al Qaeda and Taliban sanctions committee also declared Hafiz Mohammad Saeed a terrorist in the wake of his organisation's involvement in the Mumbai terrorist attacks of November 2008.

But despite the UN ban, the countrywide vast educational and healthcare network of the JuD/LeT combine continues to function freely and without facing any restrictions. The federal government in Islamabad blames the Punjab government (led by the Sharif-led Pakistan Muslim League) for giving a free hand to the LeT/JuD, maintaining that it was trying its best to limit Hafiz Saeed s activities but the Sharif government in Punjab was not cooperating with the centre on the issue. 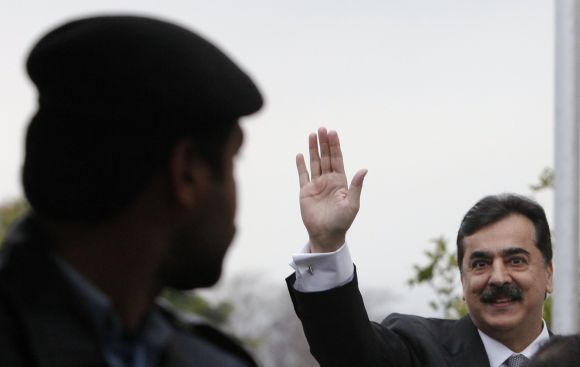 Granted that the Punjab government was permitting the LeT/JuD to hold public rallies full of hate speech across Punjab. But the truth is that these organisations have also held rallies in Karachi and plan on doing so again in other parts of the Sindh province. The PPP has a majority government in Sindh, so why is it not stopping them either?

The PPP government in the centre also has to look at itself instead of scoring political points by blaming the Punjab government alone.

To tell the truth, putting further pressure on the Americans and Indians through anti-American and anti-India vitriol (that usually marks Difa-e-Pakistan Council's rallies) is not going to benefit Pakistan.

Given the cast of characters involved, there is little doubt that if the council leaders are made in charge of Pakistan, some catastrophic decisions would be made. For two decades, from the 1980s, the Pakistani security establishment explicitly supported a certain kind of worldview.

Then, in the aftermath of the 9/11 attacks, the establishment may have cut many of its ties to jehadi groups and ended its explicit support for jehad to some extent. However, it did nothing to provide a counter-narrative.

Therefore, the narrative of Pakistan as the bastion of Islam fighting against an unjust and unfair world has continued, and it has grown into an ever greater threat to the country itself.

Under these circumstances, it would be sagacious for Pakistan to allow Difa-e-Pakistan Council to hold more rallies and spit more venom in the country. The jehadi Frankenstein has taken the lives of thousands of innocent Pakistanis and it is high time to dismantle the same.