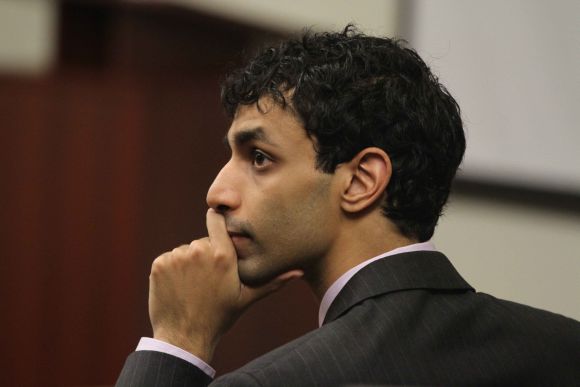 As the verdict in the web spying case came, and the word GUILTY was uttered several times, two families sat on the opposite sides of the aisle in a court in New Jersey, US.

The parents of 20-year-old Dharun Ravi, family friends and relatives watched, with some eyes moist, as he was found guilty of bias intimidation and invasion of privacy charges, knowing that he could be sentenced to 5 to 10 years in late May and possibly deported to India.

The family is expected to appeal the verdict and also fight the case in an immigration court.

Ravi, who was born in India and is still an Indian citizen, though he came to America when he was very young, has surrendered his passport and is free on a $25,000 bail.

Ravi, then 18, was found guilty of for using a webcam to watch roommate Tyler Clementi at Rutgers University in September 2010 with another man.

Clementi jumped off the George Washington Bridge a few days later, after learning Ravi and others had watched him through the computer-mounted camera. But Ravi was not charged with Clementi's suicide. Clementi was just about 18. Ravi was found also guilty of invasion of privacy and witness and evidence tampering. 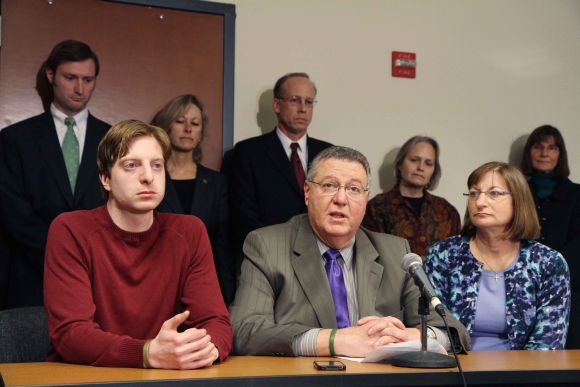 His family spurned the prosecutor's plea bargain offer many months ago. He was to do 600 hours of community activities and take anti-bullying courses.

The prosecutors also offered to help him avoid deportation but there was no guarantee immigration authorities would heed the request.

His friend Molly Wei who watched Clementi and his sexual partner kiss each other through Ravi's clandestine recordings avoided the trial by turning a witness for the prosecutor and is doing 300 hours of community service and taking up sensitivity and anti-bullying courses.

If she completes the three-year programme without getting into legal trouble, the charges against her will be dropped. Had she been convicted on the two counts of invasion of privacy, she could have been sentenced to five years in prison

Tyler's mother cried as the verdict was read March 16 after 12 hours of jury deliberation spread across more than three days. She was comforted by her husband Joe who later read out a statement at a news conference in the court.

He advised young people: 'You're going to meet a lot of people in your life. Some of these people you may not like. Just because you don't like them doesn't mean you have to work against them.'

Rutgers University said in a statement: 'This sad incident should make us all pause to recognise the importance of civility and mutual respect in the way we live, work and communicate with others.' 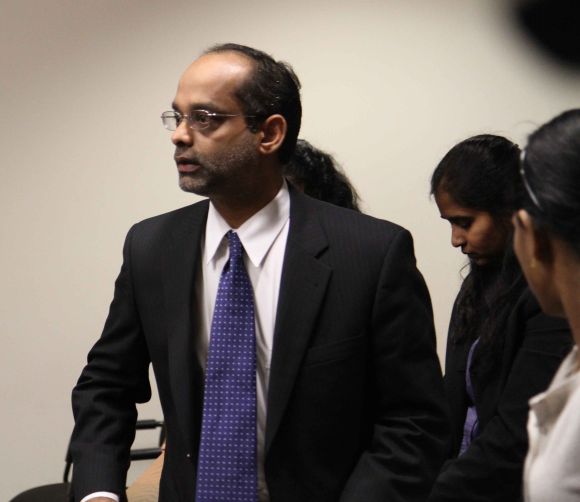 Ravi's family led by his father Ravi Pazhani also was obviously distraught, and though Ravi hardly betrayed any emotions, for a few seconds, he covered his mouth with his hand, his eyes widened in disbelief.

The Clementi family met journalists at a post verdict press conference but Pazhani, Ravi and over a dozen relatives and friends swiftly left the court.

Legal experts and a few gay activists were among the first to react.

Louis Raverson, a law professor of criminal and civil trial litigation at Rutgers School of Law-Newark, thought the prosecution made its case and that the bias intimidation charge was used appropriately.

'There was a fair amount of evidence that Ravi did harbour a bias towards gay males and that he thought it was funny to expose Tyler because of his relationship with another man,' he told MSNBC.com. 'It may not have been overwhelming evidence but it was certainly sufficient for the jury to find that Ravi was guilty.'

Raverson also thought the decision could lay the groundwork for similar cases nationally.

'It will be an important precedent throughout the country because it is recognising the kind of bullying that's gone on for decades and decades isn't just boyish pranks but rather they're serious crimes,' he said.

Meanwhile, Marc Poirer, an openly gay professor of law and sexuality at Seton School of Law, told MSNBC that he was concerned about the verdict, saying it was not a typical bias crime. 'I think that the law didn't fit very well," he said, calling Ravi's actions those of a "dumb 18-year-old" that "went wrong.'

Columnist and gay activist William Dobbs did not share, he said, the clamor for revenge in the gay and larger community.

Saying that there was no winner in the case, he added: 'There's a young gay man dead and another one whose life is wrecked to a considerable degree. This case had an overzealous prosecutor ... who was pushed by gay organizations that have lost sight of justice.' 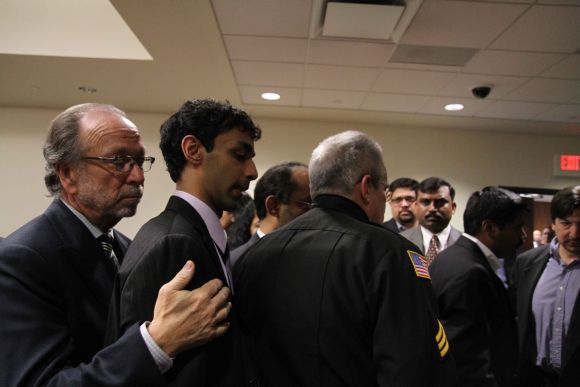 'The suicide cast a long shadow into that court room and really got the book thrown at Dharun Ravi,' he added. 'This is well beyond looking for justice and into the realm of vengeance considering the number of charges against Ravi and the seriousness of them. As hate crimes prosecution mount, the flaws of such laws become apparent.'

Having tried under the newly enacted hate laws, considerable hysteria was generated, he continued.

South Asian gay activist Shawn Jain had mixed feelings about the case. When Jain first heard of heard of 18 year old Tyler Clementi caught in a sexual tryst with a gay man and committing suicide soon after the Web scandal, he says he felt immediately empathy for the Clementi family. This was in September 2010 but soon he was finding out more about the case, especially during Dharun Ravi's trial on 15 counts including invasion of Clementi's privacy and hate crime against Clementi.

"There has been so much of misinformation in the media, for instance, the news that Ravi broadcast the scenes of sexual encounter between his roommate Clementi who was a gay and his gay lover."

Jain, a former board member with the South Asian Lesbian and Gay Association in New York (SALGA), said: "Ravi cannot be held responsible for Clementi's death. There are gays and lesbians in the South Asian community -- for that matter in all communities -- who overcome the effects of mistreatment because they were gay or lesbians and yet because they taught themselves to be resilient have overcome the obstacles and prejudices against them. I think of Mashuq Deen. He has faced many difficulties in the Muslim and the larger community because of his transgender sexuality but he has also proved to be a resourceful and resilient human being and a good playwright."

Jain said he was angered and saddened that Ravi was being blamed for bullying his roommate. "There is also some irony here," Jain said. "Both Ravi and Clementi belonged to minorities community. Ravi was born in India and is an immigrant. Clementi, on the other hand, belonged to a sexual minority."

Ravi might have felt uncomfortable sharing the room with a gay man but it does not necessarily mean he hated gays. "He is like so many people in the Asian and the larger communities who have acquired prejudices against people of different sexuality and he may been behaving as being "symptomatic of an abusive, straight, privilege[d]" male of South Asian descent."

Ravi could be a Democrat and liberal in many ways but he could not overcome his prejudices, Jain continued. "I feel the trial is a sideshow. The real challenge was to get the entire society think and reflect on its biases and make sure they learn to overcome those negative factors."

Jain said there are thousands of men and women South Asian and other communities in America who belong to minority sexual communities who feel they are marginalised and maligned because of their sexuality.

"We do not have to wait for something terrible to happen before we examine our attitude towards the minority sex," he continued. "Ravi is like a person we know and whose prejudices and biases we have ignored as parents, brothers, sisters. He is not necessarily a bad kid but whose misdirected actions create problems."