Delhi cops say no, but Hazare to go ahead with fast 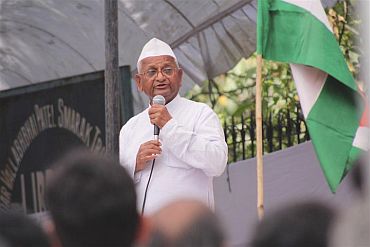 With the Delhi police refusing permission for a day-long hunger strike at Jantar Mantar on Wednesday, civil rights activist Anna Hazare on Tuesday decided to shift the venue to Rajghat to avoid any confrontation.

The announcement was made by his associates Arvind Kejriwal, Prashant Bhushan and Kiran Bedi, while contending that the denial of permission to hold a peaceful protest was against the basic constitutional rights of citizens.

Hazare and others will launch the day-long hunger strike to protest the crackdown against Ramdev's congregation against corruption at Ramlila Maidan on Saturday night.

'We are not fighting with them' 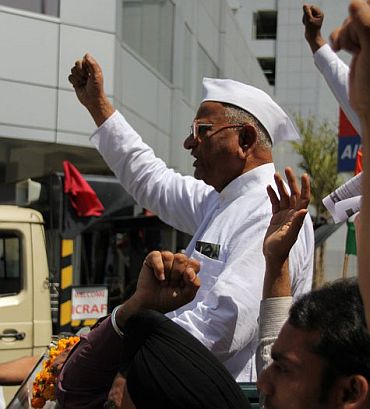 The Hazare-led protest will be held in the vicinity of Rajghat from 10 am on Wednesday and will be accompanied by a fast, an all-religion prayer meeting and a debate on the Lokpal Bill.

"The Delhi police commissioner (B K Gupta) has said that there is no permission to sit (on fast) there (Jantar Mantar) and directed us not to sit there," Bhushan said about the venue which falls in New Delhi district, where Section 144 has been imposed to prohibit the gathering of more than four persons at one place.

"We are not fighting with them (the police)," he told reporters, adding that they had accordingly decided to shift the venue to Rajghat, where Section 144 is not in force.

'No intention for a confrontation' 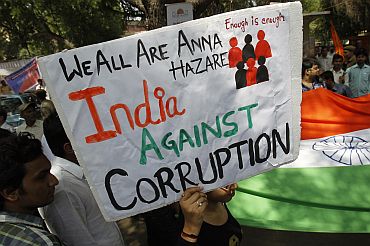 Kejriwal said, "We have no intention for a confrontation. Our intention is only to hold a peaceful protest."

At the same time, he said the denial of permission was in violation of Article 19 (1) and 19 (2) which gives freedom of speech to everyone.

Echoing Kejriwal's views, Bhushan said the Delhi police should not take such an action, otherwise people will have to resort to other means to express themselves.

A senior police official said on Tuesday that they have refused permission for the fast at Jantar Mantar while citing prohibitory orders at the site, after the police action against Baba Ramdev in Ramlila Maidan on Sunday.

Kejriwal, who earlier in the day claimed that no one can stop Hazare from protesting at Jantar Mantar, said their protest will be "very peaceful".

'They are not our masters' 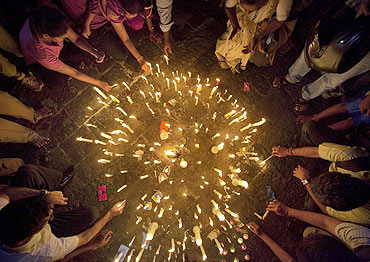 Earlier in the day, he had said, "From whom should we seek permission? They are not our masters. People of this country are the masters. The government is not our masters. Unfortunately, they have started behaving like they are our masters."

Justice Santosh Hegde, who is the Karnataka Lokayukta, said he will not join any fast or demonstration till he was holding a public post but noted that the move to impose Section 144 and deny permission to Hazare "indicates a weakness" on the part of the government.

"The actions of the government against Baba Ramdev shows they are scared of him," he alleged, adding that he was not asking anybody to defy the law.

Bharatiya Janata Party spokesperson Nirmala Seetharaman said the police decision not to allow any protests at Jantar Mantar "clearly" showed that the government is neither prepared to engage with the civil society nor is it clear about the strategy with which it has to negotiate on issues which are confronting it.