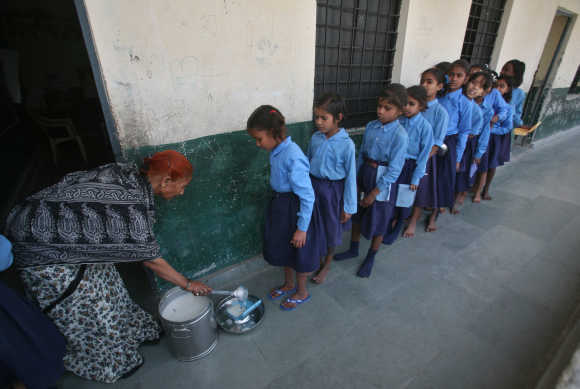 A preliminary probe by doctors and Saran district officials into the death of 22 school children in Bihar has revealed that consumption of Organophosphorus used in pesticides or contaminated mustard oil used to prepare the potato-soyabean is the cause of death.

“The doctors have told me that atropine had worked positively on patients that show some kind of poisoning,” Sinha said.

He also did not rule out the use of contaminated oil in preparing the mid-day meal.

A doctor who attended sick children in Saran told rediff.com on condition of anonymity that he suspected Organophosphorus, a type of insecticide, was the cause of poisoning.
He said that symptoms indicate food poisoning caused by Organophosphorus.

Dr Chandrasekhar Singh, a doctor at the government hospital in Saran, who examined several children on Tuesday, told rediff.com that about 10 children, who had not consumed the potato-soyabean curry, are safe.” He pointed out that contaminated oil might be the cause of food poisoning as all the students who did not eat the vegetable were safe.

The Centre has sought a report from the Bihar government on the mid-day meal tragedy. "It is a very sad incident and we are deeply pained over the loss of lives of young children," Human Resource Development Minister M M Pallam Raju told reporters here as he termed the incident an "aberration".

"It is an aberration that this has happened although it is an unfortunate incident, it's not a recurring thing," he said, adding an FIR has been lodged against the school principal.

According to district officials, the mid-day meal consisted of rice, pulses and potato-soyabean curry.

Parents of several children informed the officials that their children fell ill due to poisonous vegetables served in the mid-day meal. Several school children, including the woman cook, were taken seriously ill and have been shifted to Patna Medical College and Hospital, Principal Secretary Education Department Amarjit Sinha said.

With input from Agencies

The school headmistress Meena Devi and other teachers of the government primary school in Dahrmasati Gandawan village at Mashrakh block in Bihar's Saran district are absconding.

While 16 children, aged below 10 years and studying in Class I to V, had died in Chhapra itself, four others were declared dead on arrival at PMCH late Tuesday night, Sinha said.

"There is no trace of the school headmistress and other teachers since Tuesday afternoon. They went missing soon after children started dying after eating the mid-day meal in the school on Tuesday noon," a district police official said.

An FIR has been lodged against headmistress Meena Devi and other teachers in this connection. "A case was lodged by father of Aditya Kumar, one of the deceased," a police officer said.

Abhijit Sinha said the project school coordinator had been suspended.

Superintendent of PMCH Amarkant Jha Azad said that the victims were admitted to ICU of paediatric department and senior doctors were attending on them round the clock.

Angry crowds took to the streets in Chapra and Mashrakh since early Wednesday to protest the death of 20 children.

People have been demanding the arrest of the school headmistress and stern action against the school staff.

The tragedy took place at the government primary school in Dahrmasati Gandawan village at Mashrakh block, about 25 km from Chhapra and 60 km from state capital on Tuesday. 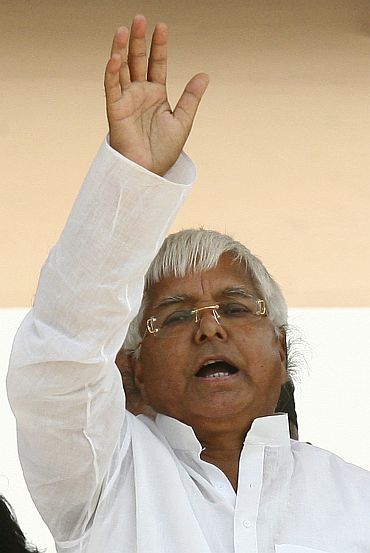 The Rashtriya Janata Dal is also observing Saran bandh on Wednesday in protest against the incident.

Leader of Opposition in the state Assembly Nand Kishore Yadav, his counterpart in Legislative Council Sushil Kumar Modi and state BJP President Mangal Pandey have already left for Mashrakh to meet families of victims and participate in Saran bandh.

The children fell ill soon after eating the meal, which consisted of rice, pulse and soyabean, police said.

They were rushed to Chhapra Sadar hospital. Later 27 of them, including the cook, were admitted to PMCH Patna Tuesday night.

The HRD ministry sent a senior official at Chhapra, where several children have died allegedly as a result of food-poisoning from the free mid-day meal provided by the government, to take stock of the situation.

Expressing serious concern over the Chhapra incident Rashtriya Janata Dal chief Lalu Prasad Yadav alleged that the people of Bihar have been completely neglected as the ruling Janata Dal-United is busy in its fight against the Bharatiya Janata Party.

“The government in Bihar has become a big joke. The JD-U and the BJP are fighting amongst themselves and the people of Bihar have been completely neglected,” he said.

Yadav also said that it is extremely unfortunate that children are dead and sick after eating the mid-day meal in Chhapra, and added that the Bihar government should guarantee that such incidents never take place again.

“There should be a thorough investigation on this incident and the government should ensure that such incidents don’t happen again in Bihar,” he added.

All children are reportedly between 8 and 12 years. The condition of several other students is stated to be serious. 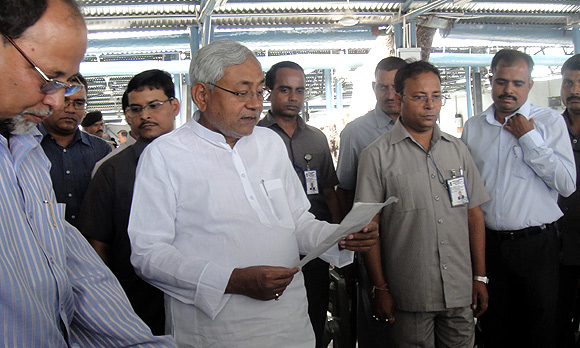 Chief Minister Nitish Kumar has ordered a high-level inquiry into the incident, sources in the CMO said, adding that a Forensic Science Laboratory team will assist in the probe, which will be conducted jointly by Saran Divisional Commissioner and DIG.

Kumar also announced a compensation of Rs two lakh each to the families of the deceased. Of this, Rs 1.5 lakh is from the Disaster Management Fund and Rs 50,000 from CM's Relief Fund.

Pained over the incident, the CM has put off Bhamasah Saman Samaroh scheduled here today, sources in the CMO said.