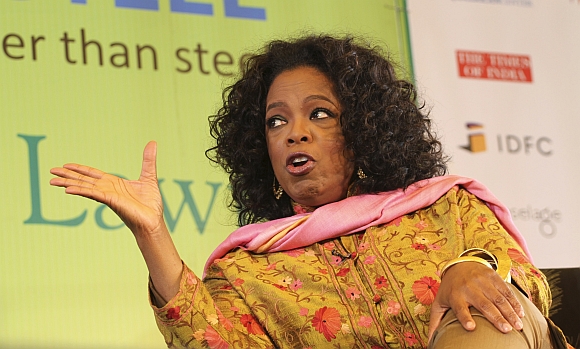 As the four authors who read out from The Satanic Verses have been asked to leave Jaipur, yet another speaker steps across the line. Rediff.com's Abhishek Mande takes you through the day in pictures and videos.

It was supposed to be the one session that was supposed to take away all the attention from the Salman Rushdie controversy. Oprah Winfrey's session on Day Three of the Jaipur Literature Festival though was overshadowed by the very issue.

As Oprah Winfrey waxed eloquent about India's traditions and culture, less than 100 meters away, in another session co-founder of Navanya publication, S Anand did what four speakers before him had already done.

Anand was moderating 'A Second Sunrise: The Literature of Dissent' featuring Cheran, Gogu Shyamala, Charu Nivedita and K Satchidanandan when he started reading out passages from The Satanic Verses.

'My life is a Taj Mahal' 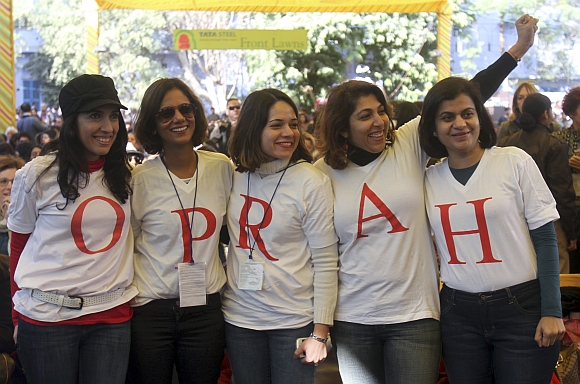 Image: Fans of Oprah Winfrey at the fest
Photographs: Reuters

Then of course, there was Oprah Winfrey who commanded a crowd of over a couple of thousand people as she spoke to news anchor Barkha Dutt about her life, what she learnt from her India stay and why she hasn't got married.

Winfrey, who had supported Barack Obama during his presidential campaign, mentioned that though she was not over confident of Obama returning to the White House, she quipped, "But look at the other party!"

The chat show queen also recollected her conversation with novelist Toni Morisson when she told her that after having read Beloved she would go over pages again, to which Morisson retorted, "That, my dear, is called reading."

On being asked by Barkha Dutt if she'd like a Taj Mahal being built for her, Winfrey cheekily replied that her life has been one.

The hour-long session, though filled with cliches was one of the most highly attended sessions of the festival with the organisers being forced to close the doors of the venue to ensure there was no stampede.

Here's everything that happened at the Oprah Winfrey session

After Oprah came Chopra! After the session, Deepak Chopra who was responsible for getting Winfrey to India did take a couple of minutes off to speak on camera. Here are his words of advice to young Indians.
Tags: Deepak Chopra , Winfrey , India

The Twitterati where here

In one of the most volatile sessions of the day, Suhel Seth, Shashi Tharoor and Chetan Bhagat locked horns on what Twitter means in this age. All three have had to face the brunt of their statements on Twitter. Tharoor's 'cattle class' remark got him into deep trouble with the Congress party, Seth who almost always puts his foot in the mouth on the microblogging site has a case slapped against him by ITC over a remark that the company didn't take kindly and Chetan Bhagat, by his own admission, has made Twitter his occupation!

The ever-eloquent Tharoor defended the government's stand of monitoring social networking websites at the session on Twitter and confessed that he wished he had exercised more caution before making the 'cattle class' remark.

Bhagat who has an awful lot of haters on Twitter (as well as off it) told the audience how on a particularly bad news day, the channels picked up his tweet about Infosys and made it national headlines. When I met him later, I couldn't resist asking him to share with us his Twitter etiquette. What he said is in the video above! Don't miss it!
Tags: Chetan Bhagat , ITC , Suhel Seth , Shashi Tharoor , Congress party

What do you ask the man who has written some of the finest books in fiction as well as non-fiction? Well, his literary influences! Shashi Tharoor, perhaps one of India's most educated and articulate MPs talked about what works influence him the most, his favourite works of non-fiction and the one book that he's been reading recently  -- Katherine Boo's Behind the Beautiful Forevers: Life, death, and hope in a Mumbai undercity. 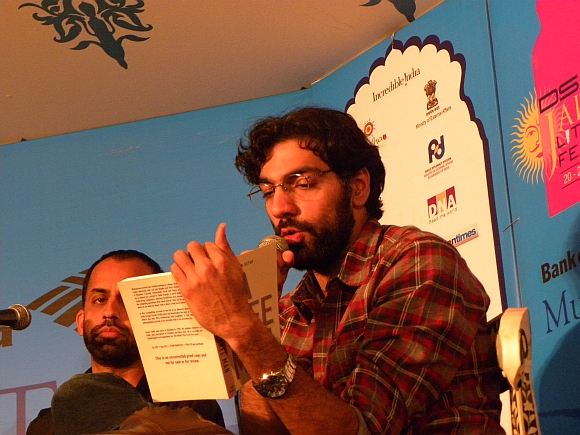 Image: Aman Sethi with Rabi Thapa in the backdrop

One of the most interesting sessions of the day was also perhaps one of the most poorly moderated one. Starring Mohammed Hanif, Aman Sethi, Meenal Baghel and Rabi Thapa, the session was moderated by Ashok Vajpeyi who looked somewhat out of place not just because he was one generation removed but also because he didn't seem to at times get the drift of the conversation even as he wrongly identified two authors -- Meenal Baghel (who he rechristened Meena) and introduced Sethi as Hanif!

It was however left to the four able authors to salvage the session, which they did. Sethi read out from a rather interesting, if somewhat funny episode of the 'monkey man' controversy that had taken the city of Delhi by storm while Baghel read out a fascinating excerpt about Ekta Kapoor's card party she attended one Diwali.

The finest (if somewhat tragicomic) episode of the session was not read out but rather narrated by Mohammed Hanif who in his trademark drawl recounted the time when, before the age of the cell phones (and before he was married), he and his male friend found themselves in the company of two sex workers who were stranded thanks to a curfew.

Hanif recollected, "They asked us if (we wanted to avail of their services). We said we weren't interested. Also we don't have the money. One of the two women was from Punjab so she and I got talking and it seemed like two fellow migrants were discussing business.

As they got up to leave (having found clients over the phone they were using), I asked them, 'There is a curfew on and you don't know what kind of people you are going to meet. Aren't you scared?'

To which they replied: 'You get screwed and you get paid. What's there to be afraid of?'"

As the session ended, the sun of which we had seen so little of in the day finally set. The evening promised to get colder and we headed back to the media centre to file our copies.