The cyclone brought tragedy but also grace and unity 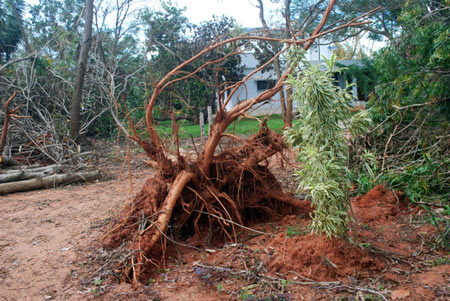 'To live 'normally' again will take weeks, but fortunately our area, which includes 7 villages, witnesses no death, not even a serious injury.

But Auroville forests will take decades to recover. They were our pride and protection against the South Indian heat, they are no more!'

Claude Arpi on the devastation in Auroville after Cyclone Thane.

We were getting ready for a New Year like any other.

A Korean poetry evening was scheduled at the Pavilion of Tibetan Culture, it should be interesting I thought, but our energy and thoughts were mainly focused on the preparation of the New Year Eve's Mandala of Lights attended each year by hundreds of people from Auroville and Pondicherry.

It was always the last 'spiritual' appointment of a year (with a visit to Matrimandir), often preceeding a more secular evening (or jumping into one's bed for older people, like me).

On the 29th morning, we heard that a cyclone was supposedly heading towards Pondicherry, but over the years, we had seen so many of them!

When the staff of our workshop asked if the next day was 'leave', we answered: "Who says that the cyclone will cross tonight? You know very well that most of the time, we only see their tails. Don't they always change direction a few hundred kilometres before reaching the coast and head north, to Andhra Pradesh or more often to West Bengal and Burma?"

The conclusion was peremptory: "No 'leave' for now, if the cyclone comes, then we will see and 'leave' will then be obvious."

As the velocity of the wind kept increasing, more and more violent rains coming in close waves began battering houses and nature. Our room on the first floor, probably more exposed, was soon flooded: At about 3 am, a plastic protection on the door to the terrace was ripped apart and flew away.

I must say that we were unable to realise at the time the extent of damage that the cyclone Thane (apparently, Burmese meteorologists named the cyclone Thane which means 'Eagle') was going to inflict on Pondicherry and Cuddalore district where Auroville is located. 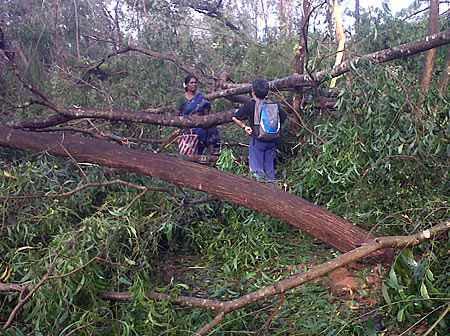 At about 4 am, I began to receive SMSes: "How are you?", "It's pouring in our house, what about you?" It was not very comforting to know that everybody in Auroville was awake at this early hour.

At 6 am, as dawn came, the wind was stronger than ever (according to newspapers received three days later, the winds reached 150 or 180 km/hour). I must say that nobody came out to measure it.

It was not until 7 am that I decided to venture out of the house to say hello to my neighbours who have a sweet one-year old daughter. I began to understand that the 'Eagle cyclone' was not like any other cyclone that we had experienced during the last 40 years.

To cross the few metres separating our house from the neighbour's, it took me nearly ten minutes; I just could not find my way, as the ground was strewn with huge branches of our banyan as well as of neem and bauhinia trees.

Later in the morning, when the neighbours began to organise themselves (we were fortunate to have in our settlement one of the best chain-saw experts in Auroville), we began to understand the magnitude of the disaster.

To progress less than 200 metres, to reach the gate of our Dana community, it took more than four hours despite the determined team of 'Danaistes' working hard to open up the road.

Only later we learned that a similar scenario had repeated itself everywhere in Auroville and the surrounding villages.

A grace: Mobile phones (at least BSNL) continued to work. Quickly, we took stock of the extent of the devastation, but the fact that there was no announced injury or death (relayed through our mass bulletin on the smart phones), led us to expect a relatively happy end. This put a little balm on our hearts.

There was no electricity, water, Internet or milk for the first few days... 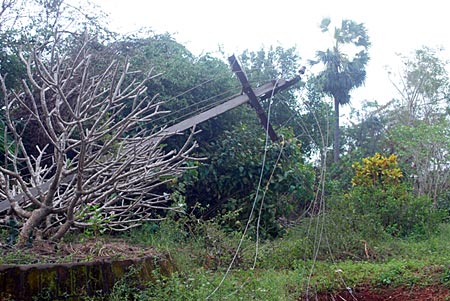 The consul general of France in Pondicherry began phoning to inquire about the fate of his countrymen. They were all safe, as far as we knew.

Thus we learned that the situation was not better in Pondicherry and that tens of thousands of tourists, who had come to spend the New Year in the former French colony were stranded in their rooms (some in hotels or resorts on the beach had to be evacuated).

The more we progressed out of Dana, painfully reopening the road, struggling metre after metre, the more we saw that everywhere the forest had been 'flattened'.

And, of course, no more power supply (the district authorities, probably better informed than us had asked the Tamil Nadu Electricity Board to cut the electricity 'for at least 48 hours from December 29 in the early afternoon' (The TNEB, always cautious, had in fact cut the supply on the morning of 29).

And, of course, no more water, no Internet (life is hard without the Internet!), no fridge, no newspapers (they arrived three days later), no milk (the milkman was stranded on his farm!) and no morning toast.

We survived. We used rain water during the first two days (a bit cold, but it is good for the blood, I was told). We cooked the 'remains' of the missed New Year Eve's dinner and suddenly our first years in Auroville in the 1970s came back with nostalgia: "It was like this when we arrived! Those were the days!"

I even remembered that we used to make fun of a 'bourgeois' community who had 'fridges' (we have ourselves become 'bourgeois' since then!).

The dignity and resilience of the villagers was touching 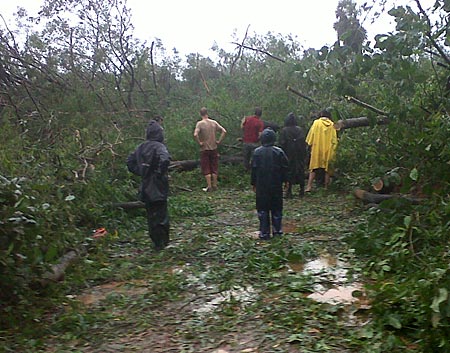 Something else quickly become 'obvious.'

When circumstances force human beings, in this case the Aurovilians, to work together for the common good, they are able to do so.

The 'individualisation' of the life in recent years, has affected many of us, young and old.

With Auroville developing faster, we became more 'efficient,' but we also became more individualistic, and there is today a tendency to forget, for the sake of 'progress' that we are one human body.

Had not the Mother, the Founder of Auroville, spoken in the Auroville Charter of 'an actual human unity'?

This devastation suddenly took us in the right direction. We can't, of course, rejoice about the disaster, especially when one sees the misery caused by the cyclone in neighbouring villages, but it was a small 'spiritual' consolation.

What was so touching was the dignity and the resilience of the villagers!

On the third day, when after a three-kilometre trek a la Indiana Jones, we succeeded in reaching our workshop, 15 out of 30 people were already there, waiting to start their daily work.

Some workers had walked for more than 2 ½ hours, in incredible conditions; often unable to distinguish between the road and the forest; ladies had to crawl under the branches holding their sari or climb over large trees.

Remarkable! For me this is the true India.

To live 'normally' again will take several weeks, but the tragedy was also a grace because our area, which includes 7 large villages, witnessd no death, not even a serious injury.

And this has allowed us to find, at least for a while, a new sense of humanity, a greater solidarity.

Another small detail was rather touching: We had a visit from Francois Richier, France's new ambassador in India. This is the first time that such a senior foreign official visited us... on a motorcycle.

His care and simplicity was appreciated by all who were fortunate enough to meet him.

But why did Nature punish Mother Nature so severely?

Auroville forests will take decades to recover. It was our pride as well our protection against the heat of South India, they are no more!

The 'why' remains a mystery to me.

For more information, you can visit: http://www.auroville.org/cyclone/pressrelease.html

Claude Arpi has lived in Auroville for over four decades.