Congress's new strategy on Lokpal: 'Reach out' to BJP 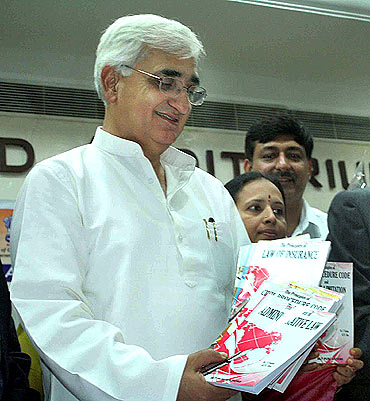 Law Minister Salman Khurshid has favoured reaching out to the Opposition and the ruling coalition's allies on Lokpal and other issues and dismissed suggestions that Trinamool Congress leader Mamata Banerjee was a 'difficult customer'.

Even as the slugfest continued between the Congress and the Bharatiya Janata Party over the Lokpal Bill getting stuck in the Rajya Sabha, Khurshid said the government should reach out to the opposition on a priority basis.

"I think we should now make that a priority -- reaching out to the Opposition -- because there are many issues on which they share our concerns. They should not just hold back because they believe holding back gives them an advantage, we should convince them about this," he said.

'We have to shake hands' 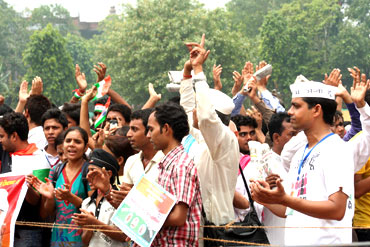 When asked whether the overnment will find it difficult to reach out to the BJP as most Congress leaders think of that party as 'political pariahs', he said, "If you live in the same house, you will stop thinking of pariahs. And we are in the same house."

"We have to shake hands; we have to get our eyeballs to meet. We have helped them and they have helped us in matters that are of critical importance to the country," he said, adding that during a war, parties do not score political points over each other.

'Her politics is the politics of passion' 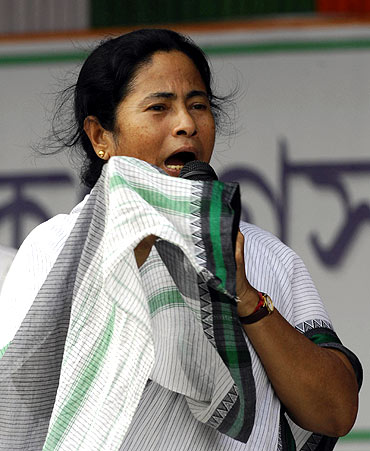 To a question on Mamata Banerjee, Khurshid scoffed at suggestions that she was a 'difficult customer'.

"She is not a difficult customer. Her politics is the politics of passion. She has great conviction; she is a very determined person. When you have someone of that nature, you need some technique to communicate better. I think we will work on that," he said.

He also favoured developing interlocutors to communicate better with the key UPA ally.

"We will remain together. Allow us to organise that dialogue on a better level, we are asking for understanding," he said.

'We need a break point' 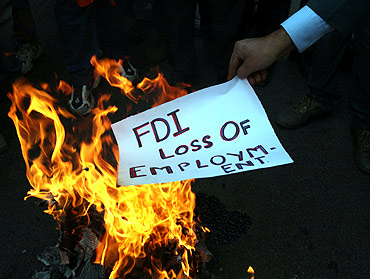 On the issue of Opposition over FDI in multi-brand retail, the minister agreed that it would require a "lot of homework" and further dialogue with "friends and foes" before coming back with FDI.

"FDI is an idea whose time has come in the world, perhaps not in India entirely. But we will ensure the clock ticks and the time does come. If you don't succeed, you have to tweak your work again and see that you succeed," he said.

He also hoped that the results to the five assembly elections will help the Congress.

"We need a break point. We need something that shakes us out of the malaise of the last year and give us a clear opening for the next two-and-a-half years. I believe in early March this is going to happen," he said, referring to the assembly polls.