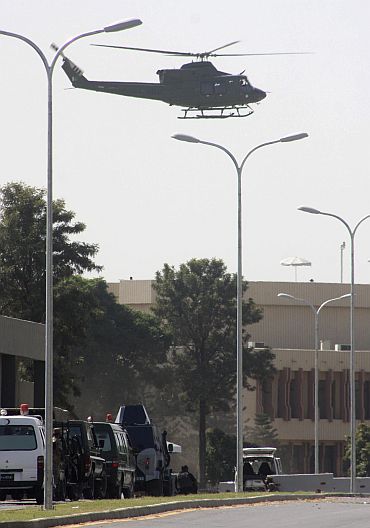 Pakistan's stubborn and equally supercilious military and intelligence establishment has a habit of not learning from its mistakes, no matter how serious they are, say Amir Mir.

It was on October 10, 2009 that ten terrorists, dressed in army uniforms and brandishing assault rifles and grenades had managed to enter the highly-guarded General Headquarters of the Pakistan Army in the garrison town of Rawalpindi and killed 15 soldiers, including a serving Brigadier belonging to the Military Intelligence.

However, that was not the end of the episode. Still to follow was a nightmarish 20-hour hostage-taking drama at a security office building inside the GHQ. The fidayeen attackers took hostage as many as 42 people, including some senior officials of the Military Intelligence.

Their ordeal only came to an end the next morning at 6:00 am following a rescue operation by the commandos of the Special Services Group of the Pakistan Army who managed to save the lives of the hostages (excluding the 15 soldiers who had already been killed a day earlier), besides killing four terrorists and capturing alive the group leader, Aqeel alias Dr Usman.

It later transpired that the attack was carried out by the Punjabi Taliban with the cooperation of the Al Qaeda-linked Pukhtun Taliban. The GHQ siege raised many important questions such as the capacity of Pakistani intelligence apparatus to anticipate such an attack and the inability of the armed forces to thwart the same once they are attacked. 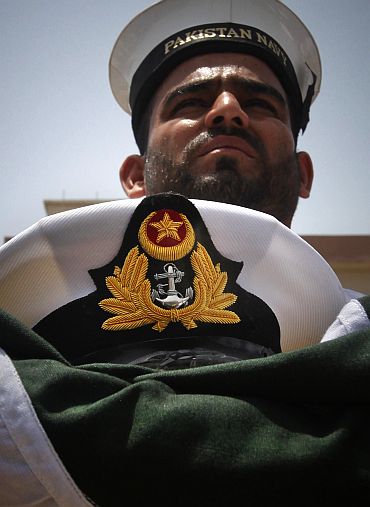 On May 22, 2011, almost 20 months after the GHQ episode, terrorists belonging to Al Qaeda and Taliban, carried out one of the worst attacks of the decade in Pakistan by targeting the countrys naval base in the port city of Karachi.

As per available details of the horrific assault, which is being described as the 9/11 of Pakistan, at least six well-armed and highly-trained terrorists managed to enter Pakistan Naval Station at Mehran, the air support base of the Pakistan Navy by strolling across a small drain and some bushes towards its rear.

They kept walking down the runway of the air base for 20-25 minutes to cover the 2.5-kilometer distance without being noticed by anyone, eventually making their way towards a hanger wherein a fleet of navy aircraft was parked.

The terrorists then approached their actual target -- two strategically significant P-3C Orion aircraft, and destroyed them one by one while hitting them with shoulder missiles. The P-3C, costing $36 million per unit, is the prime maritime patrol and reconnaissance aircraft being operated by the Pakistan Navy, which Islamabad had purchased from the United States only last year. 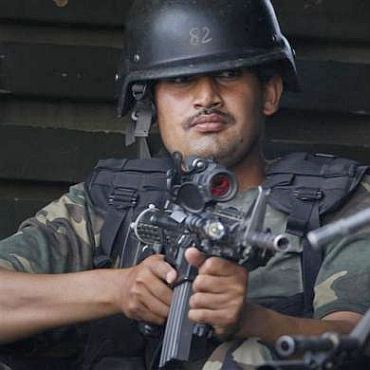 It was only after the precious aircrafts had caught massive fire that the authorities at the naval base came into action. According to eye witnesses, the terrorists acted in a calm and relaxed way, firing at intervals. They appeared to have complete knowledge of the base and frequently used to change their positions.

Very much like the Mumbai attack, the attackers were well-equipped with arms, ammunition, food and drink. A fighting force of over 1,500 personnel comprising Pakistani naval and military commandos and Rangers subsequently launched a massive operation to regain control of the naval air base and took 16 hours to achieve their objective.

It was initially reported that 10-15 terrorists had penetrated the base but once the operation was over, it transpired that only six terrorists were involved in the raid. Four of them were eliminated, and two others may have escaped. The terrorists had come prepared for a long haul as security officials found several packets of dates, among other things, on their bodies. They might have planned to take hostages as well, as Interior Minister Rehman Malik disclosed that there were 11 Chinese and six Americans present at the airbase when it was struck. 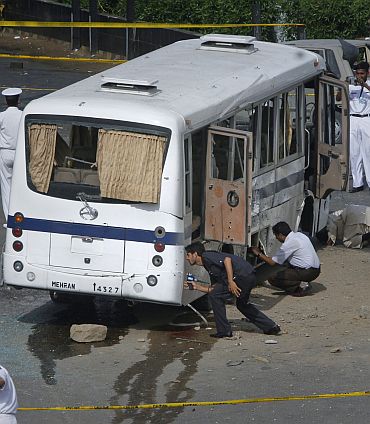 The Pakistan Navy has come under attack thrice [in a short span of one month] before the Mehran attack. On April 26, two Navy buses were bombed and on April 28, another Navy bus met the same fate, killing at least a dozen people, including some navy officers.

Under these circumstances and especially after the killing of Osama bin Laden, it is surprising that proper measures were not taken by our security forces in guarding a key naval base.

Those investigating the Mehran base attack say the target chosen by terrorists showed that they were well aware of the significance of this installation and its role in counter-terrorism efforts. It was the headquarters of the naval air arm and was used by the aviation of all the three armed forces for air surveillance over the sea and to prevent any sea-borne intrusions and attacks by terrorists, especially on oil tankers.

While the Pakistan Army and the Pakistan Air Force have no operational role to play in the US-led military operations in Afghanistan against Al Qaeda and the Afghan Taliban, the fact remains that Pakistani Navy is a member of the US-led international naval force, which patrols the seas to the West of Pakistan to prevent any hostile activity that could hamper the operations in the Afghan territory. 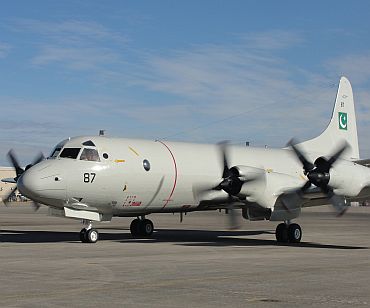 The Combined Task Force 150, established at the beginning of Operation Enduring Freedom in 2001, comprises naval forces from the United Kingdom and the United States, France, Germany, Italy and Pakistan.

It is the air engineering and other modern facilities at PNS Mehran that boosted Pakistan Navys role in the coalition task force operations at sea. The task force conducts maritime security operations in the Gulf of Aden, the Gulf of Oman, the Arabian Sea, the Red Sea and the Indian Ocean.

The Tehrik-e-Taliban Pakistan was quick to claim responsibility for the Mehran assault, saying that it was in revenge for the May 2, 2011 American raid that killed Osama bin Laden.

It was the proof that we are still united and powerful. Our fighters are under orders to fight to the death. They do not want to come out alive. They went there to embrace martyrdom, said TTP spokesman Ahsanullah Ahsan on May 23. 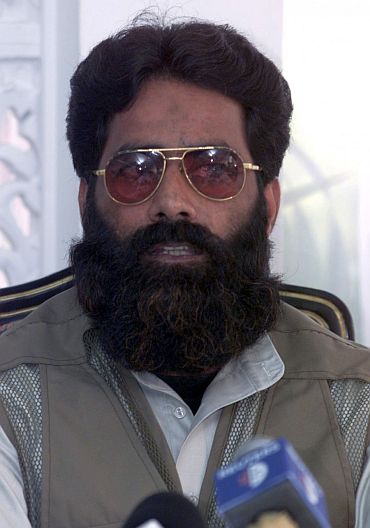 But security experts believe that given the nature of the attack -- a complex, coordinated assault on a high security installation, and the location, in Karachi, the likelihood is that this was a joint operation between the Pakistani Taliban and Al Qaeda elements.

According to them, Brigade 313, the unit commanded by Al Qaeda and led by a Pakistani jihadi Ilyas Kashmiri, has a role in this attack. Kashmiri was instrumental in executing a similar assault on the GHQ in October 2009.

The Taliban initially took credit for both attacks, but Kashmiri and Brigade 313 were later discovered to have been involved in the planning and execution.

At the same time, however, those investigating the Mehran episode say there is a strong possibility that insiders were once again involved in providing some vital information to the Mehran base attackers, as had been the case with the GHQ attack of October 2009.

The investigators recalled that Mohammad Aqeel alias Dr Usman, the ring leader of the GHQ attackers, had been affiliated with the Army Medical Corps as a nursing assistant and posted at the Combined Military Hospital in Rawalpindi till 2006. 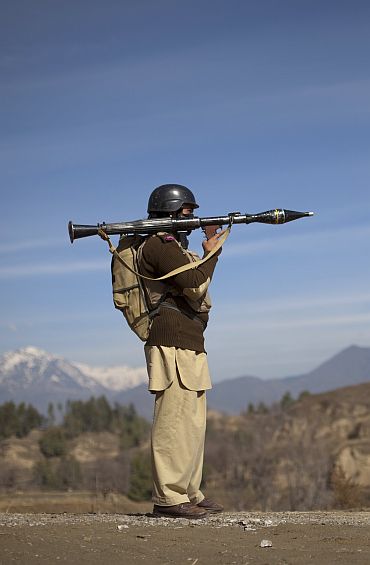 When the navy buses were attacked with bombs in Karachi in April 2011, there were rumours of insiders being involved. Even before those attacks, several months ago, a marine commando unit official of the Pakistan Navy, deployed at the Mehran naval base, was arrested by the Pakistan Naval Intelligence for his alleged militant links.

A member of the Mehsud tribe from South Waziristan and indoctrinated by militants, he had reportedly told his interrogators that militants were planning to attack naval installations, including the Mehran base.

The importance of the Mehran naval base can be gauged from another angle -- it is the headquarters of the Naval Air Arm and located hardly 24 km from the Masroor Air Base, Pakistans largest and a possible depot for nuclear weapons. The Obama administration did not publicly go beyond strongly condemning the attack on Mehran naval station and appreciating the service and sacrifices of their brave Armed Forces.

But the incident has re-ignited the simmering debate about vulnerability of the Pakistani nuclear weapons.

While Pakistan insists that its crown jewels are under foolproof security, at the heart of the debate is worry that they are vulnerable to internal pilferage or attack by a jehadised military, judging by multiple attacks on military facilities by terrorists who seemingly have the inside track on security, including in the Mehran strike. A recent WikiLeaks cable citing Pakistani military officials admitting sabotage of several F-16s by Islamists amongst the enlisted ranks has already added to the concern.

Pakistani militant attacks over the last five years include strikes against three nuclear facilities, in Wah, Sargodha, and Kamra areas.
However, each time, the military establishment insists that there was no danger to its nuclear assets.

The naval base attack was an exceptionally audacious act at a high-security facility and was carried out at a time when the Pakistani military leadership was already under intense pressure from the United States for failing to know that bin Laden had been living in a garrison town, north of the capital and near a top military academy, for almost six years. 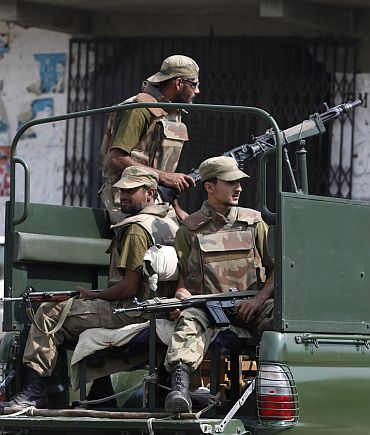 Following the May 2 Abbottabad raid against Osama, Pakistan's military and intelligence establishment was bitterly criticised by the general public for its failure on two fronts -- intelligence and defence.

While the ISI had no idea that the worlds most wanted terrorist was living in the house next to Pakistans best guarded military academy since 2005, the Pakistan Army and its Air Force were clueless about American stealth helicopters having already intruded into Abbottabad to conduct a 45-minute long Operation Geronimo.

The Mehran base attack has literally shattered the Pakistani nation, with analysts viewing it from three different angles.

According to Imtiaz Gul, a senior defence analyst, if the objective behind the Mehran attack was to make Pakistani defence look vulnerable, the operation came remarkably close to doing just that. 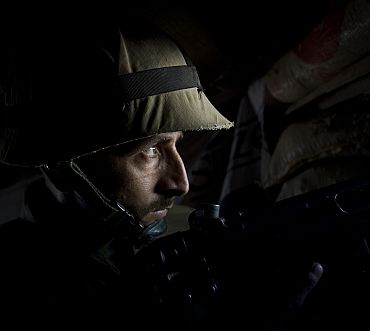 By no means was this the first tri-dimensional incident that exposed the vulnerabilities of our defences. Most of the fidayeen attacks being carried out by Islamic extremists in Pakistan bore similarities to the fidayeen tactics that Lashkar-e-Tayiba fighters had probably learnt from the Tamil Tigers and then applied during their suicide missions in Indian-administered Kashmir: raid, kill and be ready to get slain.

Their targets were military cantonments and installations of the Indian Army, para-military and intelligence agencies. One of the objectives was to cause panic and demoralise the Indian troops who had been operating in a pretty hostile environment.

Now, if we look at the pattern of the terrorists attacks in the last two years or so, Pakistan and its security institutions face the same specter: systematic targeting of the security forces, both civilian and police.

The inescapable consequence of terrorist attacks on military installations is panic, embarrassment and of course loss of face. This injects fear and uncertainty into the minds and hearts of Pakistanis, prompting them to ask if the Pakistani security establishment cannot protect itself; how it will protect the citizenry.