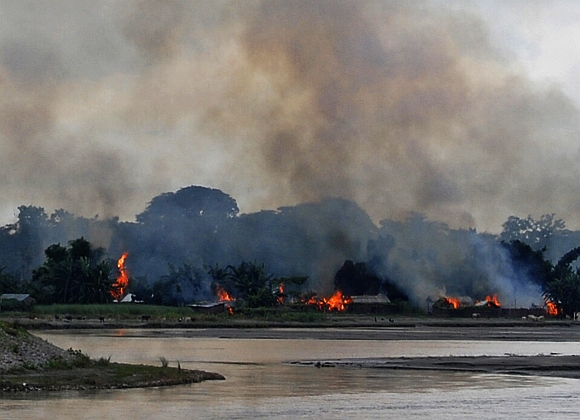 Image: Flames erupt from huts built on the banks of river Gourang during violence near Kokrajhar town in Assam
Photographs: Reuters

Congress General Secretary and Assam in-charge Digivijaya Singh in an interview to CNN-IBN said it was not right to draw parallel between 2002 Godhra riots in Gujarat and the present ethnic clash in Assam.

"Assam is not an easy state to govern. It's got the ethnic diversity that no other state has got and it has a history of ethnic conflict since the last there decades. So you can't really judge the performance of the chief minister or the government on one incident," said Digivijaya Singh.

Singh, however, said that it was a very unfortunate incident. "We have to bring peace first, we have to stop violence and at the same time we have to provide shelter, food, medicines etc. at the relief camps," he said.

When asked about the parallels being drawn between Gujarat and Assam, the Congress general secretary said, "The communal violence in Gujarat was state sponsored, here it is certainly not state sponsored. In Assam, the state government is trying its utmost to bring peace to the area. You just can't compare Gujarat riots with Assam."

'State needs sufficient time to get situation under control' 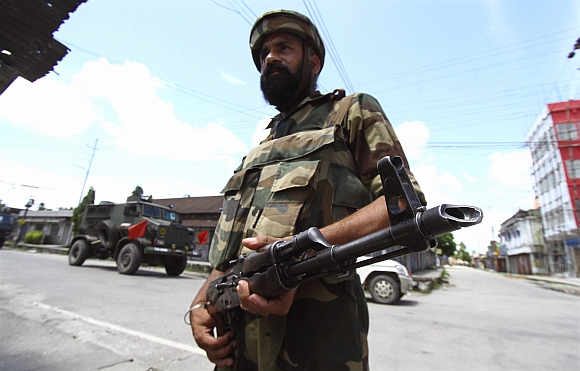 "Gujarat Chief Minister Narendra Modi sponsored the communal violence and Assam CM Tarun Gogoi and the whole administration has tried its best to bring about peace by controlling it immediately. There can't be any comparison between the two," said Digivijaya Singh.

"Is there an incident where the collector, superintendent of police or director general of police is helping the people who are engaging in communal violence?" asked Singh.

In Gujarat there was a specific instance where the whole administration allowed the Vishwa Hindu Parishad and Rashtriya Swayamsevak Sangh to go berserk against the Muslims. This was not so in the case of Assam," he said.

The Congress general secretary said that the visit of the chief minister or any VVIP to an affected area should be at the right moment after peace has been restored. "We have to give the state administration sufficient time to get the situation under control. The army cannot be brought in for every incident. We don't want to bring in the army where the civil administration is capable of handling such situations," he said.

'Cases of illegal migrants being taken up at district level' 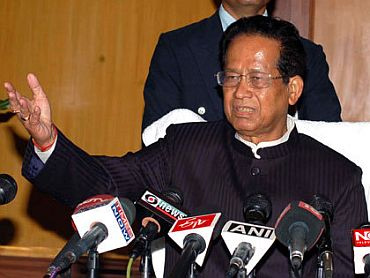 Speaking on illegal migration and the growth in Muslim population, Singh said, "During AGP's (Asom Gana Parishad) regime also they could not identify illegal migrants of more than 2,200 – 2,300 people. As far as our government is concerned we have made a determined effort to identify that all these cases of illegal migrants are being taken up at the district level."

On Assam being Congress's Gujarat

"First of all the Bharatiya Janata Party, RSS & VHP do accept the fact of communal violence in Gujarat. I am very grateful to them. As far as Assam is concerned, the state administration has done its best to bring about peace as soon as possible. What happened in Ahmedabad was in the state capital and in Assam it is in the remote areas, so you can't compare the state sponsored violence of Gujarat to that of Assam."