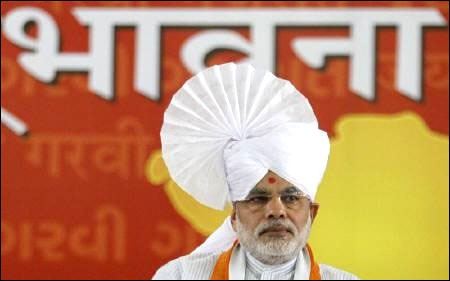 The Comptroller and Auditor General's reports on the scams under the watch of the UPA government at the Centre are being celebrated by the BJP, but when the auditor indicts the government of its blue-eyed boy in Gujarat, the party is strangely silent. K Shah reports from Gandhinagar

The Narendra Modi government in Gujarat came under the scanner of the Comptroller and Auditor General, which slammed it while detecting massive financial irregularities crossing over Rs 16,706.99 crore (Rs 167.07 billion) in its latest report which the Modi administration deliberately tried to dodge and ultimately tabled it on Friday in the House -- the last day of the assembly session.

When the report was tabled in the House, the entire Opposition was suspended from the proceedings in order to avoid discussion on the irregularities for which the statutory auditor has indicted the administration.

"Nowhere in the history of Gujarat has the CAG ever made such strong observations thereby establishing that the Modi government was indulging in unfair and corrupt means. As per the norm, the CAG report is supposed to be tabled at the beginning of the Budget session," said state Leader of Opposition Shaktisinh Gohil. 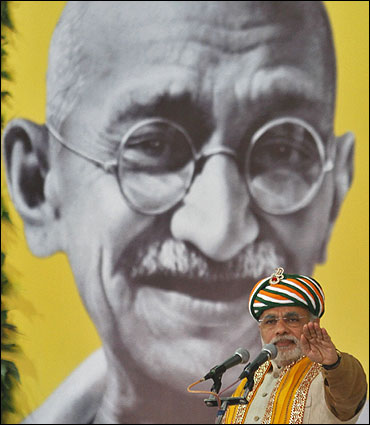 Few high points of the Modi government's corruption as exposed by the CAG report:

Chief Minister's favourite Blue Chip company Gujarat State Petroleum Corporation has turned out to be an epicentre of corruption during Modi's tenure.

The CAG has observed that the company has suffered huge financial losses due to cost overrun at KG basin block where production has not commenced even after spending over Rs 7,000 crore (Rs 70 billion).

The CAG has observed that GSPC, with its consortium, submitted a bid for acquiring the KG block "without properly assessing related technical and financial issues."

"Way back in 2005, this propagandist chief minister had hastily announced that GSPC's KG basin block contained gas reserves over 20 TCF and production would begin within two years. Now, it stands established as the DGH (director general, hydro carbon) has certified that the KG basin block does not have more than 2 TCF gas reserves," Gohil said quoting the CAG report. 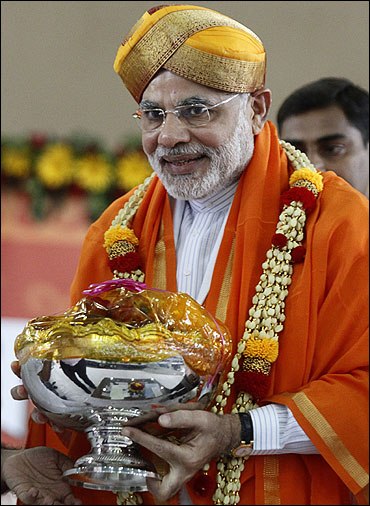 Image: Modi being felicitated by his supporters
Photographs: Amit Dave/Reuters

Besides irregularities and cost overrun at KG basin project, the auditor has also noted that GSPC has suffered financial losses in gas trading activities on account of undue favours extended to Chief Minister Narendra Modi's most favoured industrial house, the Adani group.

According to Gohil, the Adani group has consistently been doled out over 5. 84 crore sq m of precious coastal land at a paltry rate ranging from Re 1 to Rs 32 at Mundra in Kutch.

The audit report for the year ending March 2011 also slammed other public sector units owned by the Gujarat government for financial irregularities to the tune of over Rs 4,000 crore (Rs 40 billion).

The Opposition has approached Governor Kamla Beniwal for action following the CAG report. 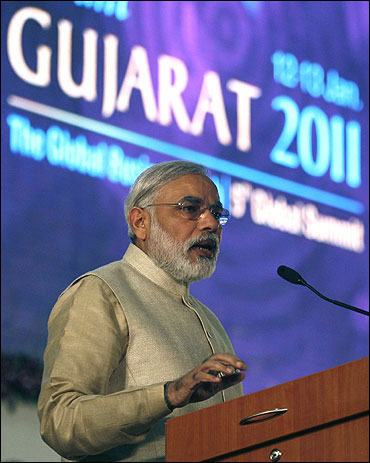 Gujarat Congress president Arjun Modhwadia confirmed that they will be meeting the governor soon.

He said, "The CAG (report) exposes the Modi government's corruption, their favouritism to certain industrialists. If Modi was courageous and honest he should not have tabled the report on the last day of the assembly session."

The state government has, expectedly, dismissed the CAG allegations.

Jaynarayan Vyas, spokeman and Cabinet minister, while defending his government, said, "The CAG report means nothing." He tried to explain that the CAG report would now go to Public Accounts Committee, and one should not believe what Opposition leaders are saying.

In Gandhinagar, no political leader of the Modi government could explain, "if the CAG is nothing", then, why at the Centre, the Bharatiya Janata Party is wholly endorsing the CAG's reports on the Commonwealth Games, 2G spectrum allotment and coal mines allotment that indicts the United Progressive Alliance government.