Sign in  |  Create a Rediffmail account
Rediff.com  » News » But where is the Rahul Gandhi touch to the reshuffle? 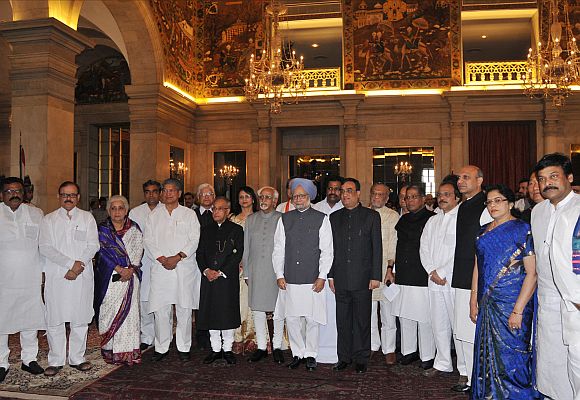 The much-talked about Cabinet reshuffle has been a play-it-safe exercise to carry on the governance without any major political problems till the 2014 elections to the Lok Sabha, notes B Raman.

The widespread expectations by many, including me, that the reshuffle would have the stamp of Congress general secretary Rahul Gandhi have been belied. The reshuffle has the hotch-potch stamp of Manmohan Singh and Congress president Sonia Gandhi.

It is a play-it-safe reshuffle to carry on the governance without any major political problems till the 2014 elections to the Lok Sabha.

Not only Dr Singh and Sonia Gandhi, but even Rahul Gandhi and his young aides have chosen to play it safe lest the Gandhi scion falls flat on his face as he did after the elections to the Uttar Pradesh assembly earlier this year.

Once bitten twice shy. That has been the attitude of Rahul Gandhi. He is still politically diffident and does not want to project himself in the forefront till the political situation turns in his favour. Public perception is still not in his favour. 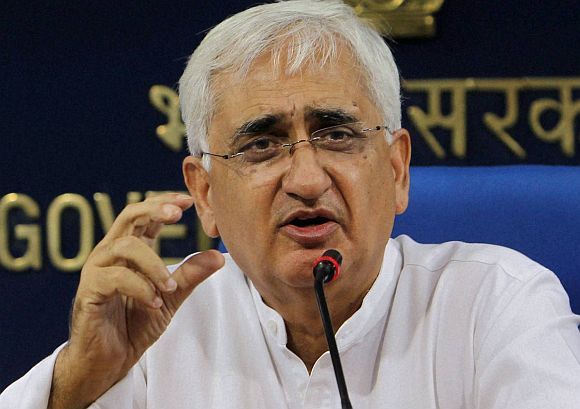 The most surprising element in the reshuffle is the elevation of Salman Khurshid as the Union minister for external affairs. Khurshid is a gifted individual and minister who had done well in whatever responsibility was entrusted to him in the past, but he had recently got involved in an embarrassing controversy due to allegations of misuse of funds sanctioned for the welfare of physically disadvantaged people by a trust with which he and his wife are associated.

He and his wife handled the allegations in a press conference in a shockingly petulant and insensitive manner.

Khurshid's behaviour definitely created considerable embarrassment for the government and a negative perception of him even among those well disposed to him.

One would have, therefore, felt that Dr Singh and Sonia Gandhi would have played it safe by not giving him a prominent portfolio.

Their action in giving him the prized portfolio of external affairs can be explained only from the point of view of a convergence of the interest of both Dr Singh and Gandhi in having him in that portfolio.

Since he became the prime minister in 2004, Dr Singh has been playing an activist role in foreign policy matters, whether it be in respect of closer strategic partnership with the United States, or a thaw in the relations with Pakistan despite the 26/11 terrorist strikes in Mumbai or co-operative relationship with China despite the continuing border dispute.

He chose SM Krishna as the external affairs minister because of the confidence that Krishna would let him play that activist role without any friction and that the two would be on the same wavelength on important foreign policy issues.

Krishna totally went along with Dr Singh in all these matters. Dr Singh has similar confidence in Khurshid.

Sonia Gandhi has reasons to be grateful to Khurshid 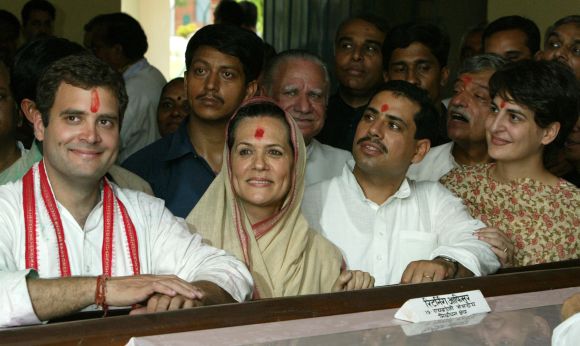 Image: The Congress president has reasons to be grateful to Khurshid for diverting the fire away from her and her son-in-law Robert Vadra.
Photographs: Reuters

In the case of Sonia Gandhi, it is not so much her confidence in his foreign policy expertise as her gratitude to him for standing by her in public as the law minister in the controversy relating to the allegations of wrong-doing made against Robert Vadra, her son-in-law, by India Against Corruption led by Arvind Kejriwal that has played a role for her backing his elevation.

It must be remembered that on the day the IAC publicly made the allegations against Vadra, there was total panic in the Congress and in the Gandhi entourage.

Khurshid stood in the forefront of the ministers who openly defended Vadra. It would not be wrong to say that his fierce defence of Vadra and his open proclamation of his loyalty to Gandhi added to the venom of the IAC against him.

Gandhi thus has reasons to be grateful to Khurshid for diverting the fire away from her and Vadra.

These two factors have definitely played an important role in his elevation in total disregard of the public perception against him.

Will this Cabinet be able to avert a defeat in 2014? Image: If the BJP wants to profit from the existing mood against the Congress, it has to project before the people an alternative policy framework.
Photographs: Reuters

Will this Cabinet, which is expected to fight the coming elections to the Loh Sabha, be able to avert a defeat in the elections?

Despite the Bofors controversy, the Congress led by Rajiv Gandhi did not do that badly in the 1989 polls even though it failed to secure a majority. The Congress was back in power within two years.

All the allegations of corruption and Emergency excesses made against former prime minister Indira Gandhi could not prevent her return to power with a huge majority in 1980.

Relentless demonisation of political opponents has played a crucial role only in the elections to the Tamil Nadu assembly.

Otherwise, the impact of a demonisation campaign is generally marginal as we have been seeing repeatedly in Gujarat and in the elections to the Lok Sabha.

If the BJP wants to profit from the existing mood against the Congress, it has to project before the people an alternative policy framework.