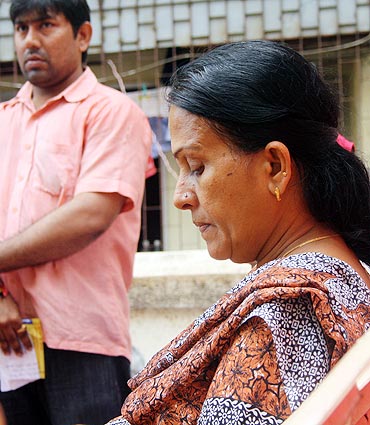 K Unnikrishnan, father of Major Sandeep Unnikrishnan who was slain in the 26/11 terror attacks cycled into Mumbai's western suburb of Dahisar on the morning of November 25. His wife Dhanalakshmi accompanied him.

Rajesh Karkera and Abhishek Mande tracked the couple as they entered Mumbai on the eve of the second anniversary of 26/11.

She sat there motionless, her face betraying nothing of what she felt or thought.

Around her, men holding microphones called her Veermata (the brave mother), Jagat Janani (the universal mother) -- and told a small crowd that had gathered around, that they were all alive only because she had chosen to sacrifice.

Amidst all the platitudes and words of apparent sympathy, Dhanalakshmi Unnikrishnan said very little.

Then again, there was nothing to be said.

Yet, when she was called on to 'say a few words' she spoke.

Dhanalakshmi Unnikrishnan held the microphone, towered over the crowd of sympathisers and shared something her son told her once. "There is more to life than getting married and producing children," she said.

She thanked the people who had gathered and for the love and affection they had showered on her husband and herself.

Dhanalakshmi lost her only son, Major Sandeep Unnikrishnan in the 26/11 terror attacks two years ago.

Show that you remember: Light a candle for 26/11

'Today I see god in my son' 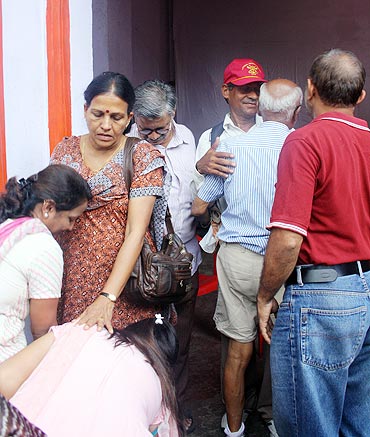 Dhanalakshmi has been travelling with her husband K Unnikrishnan from India Gate in New Delhi to the Gateway of India in Mumbai to pay tribute to the martyrs of the 26/11 terror attacks.

Unlike her husband who has cycled the entire 1,600 odd km, Dhanalakshmi covered it in a car that trailed him and his cycling partner Hiralal Yadav.

Yadav, who met the couple when he was on his Bharat Jodo rally from Kanyakumari to Delhi, suggested the cycle yatra to the couple in May as a way to pay tribute to the 26/11 martyrs.

Dhanalakshmi regrets today that she never learnt to cycle.

As she addressed the small gathering, she said at first she believed in multiple incarnations of God.

ALSO SEE: Watch what Dhanalakshmi Unnikrishnan said
Show that you remember: Light a candle for 26/11 victims

'Our task is complete' Dhanalakshmi's 62-year-old husband is a man of serious demeanour. Wearing a red cap and a tracksuit, he has been on the road since October with Yadav, 55.

Unnikrishnan and Yadav have travelled through Uttar Pradesh, Rajasthan, Madhya Pradesh, Haryana and Maharashtra, meeting families of martyrs, speaking with army aspirants and addressing small gatherings of locals quite like this one.

The former ISRO employee said in a way his journey had been complete today.

"We planned this from our home in Bengaluru and today we have reached Yadavji's house here in Dahisar (part of greater Mumbai)."

"It was a difficult journey -- at times the roads were really bad, at other times there would be heavy vehicles all around us."

"We met a lot of people, addressed a lot of gatherings but today it rained for the first time on the dais. It feels as if we've completed our task!"

On Friday the couple will leave to complete the final leg of their journey to the Gateway of India, light a candle outside the Taj Mahal hotel and observe a day-long fast.

With this, says Unnikrishnan, their journey will come to an end.

Watch K Unnikrishnan speak
Show that you remember: Light a candle for 26/11 victims