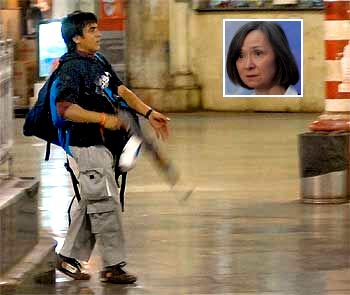 A year ago, Kia Scherr lost her husband and 13-year-old daughter in the Mumbai terror attacks. Yet, reports Arthur J Pais from Virginia, USA, they remain a constant presence in her life, as she channels grief into service.

"Imagine you are in Mumbai face to face with the sole surviving terrorist Ajmal Amir Kasab, what would you tell him," a reporter asks Kia Scherr, who lost her husband Alan and their only child Naomi during the November 26, 2008 attacks in Mumbai.

Kia, as everyone calls her at the Synchronicity Foundation meditation and monastery community, closes her eyes for a minute.

"I don't think I can bring myself to face him or any one of them (if they were alive)," she says. "I will be overwhelmed. I will cry and cry and cry."

She pauses for a minute.

"But this much I can say, I have never felt any hatred or anger towards any of the killers, not even for a moment," she says. "And personally, I don't want the survivor to be given a death sentence. I would like to see him incarcerated for life and made to work for humanity."

Another pause. "But who am I to say so? I will go with any decision the Indian government and the courts in India will make; even if it is capital punishment."

Because of her meditation, deeply inspired by the Gita and the words of Ramakrishna Paramahamsa and the soul-healing poetry of Rumi, she says, she felt soon after hearing the news of the killings that the jihadists had killed the love in themselves and the love around them.

"If I were to sit with the killer, I would ask him to tell me about his family, about his childhood," she continues. "I believe he came from a very poor background and the leaders of the terrorist group used him." The questions may lead to sudden introspection or sow the seed for a slower introspection.

Kia has been living in the meditation centre and monastic community in the Blue Ridge Mountains of Virginia, for over a decade.

Kia was in Florida with her parents for the Thanksgiving weekend when she first heard the news of the siege -- and then the killings. "It was like being shot through the heart and you are still alive," she says, as her petite frame shakes. "I collapsed on the floor. After weeping for a long time, I went into myself and began to pray," she says, fighting her tears.

"I could not bring myself to be in the old house after what happened," she says. "Even though I am fighting hard to turn the tragedy into a life force and work with Master Charles (the founder of the Synchronicity Foundation) to head a spiritual movement called One Life Alliance, there are still a few things that I just cannot do."

'Naomi enjoyed the kind encounters she had in India' 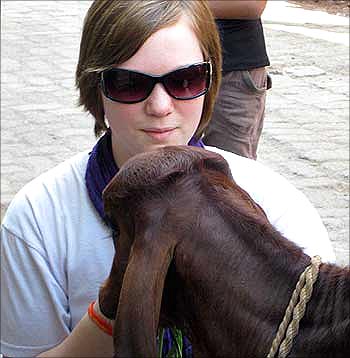 Kia Scherr remembers vividly a three-way hug they had at the Dulles airport, Washington DC, before the father and daughter left for India. She had talked to them regularly during the week they had spent in India before the siege.

"Alan had been to India on three occasions but it was the first for Naomi," she continues.

"She had plenty of stories to tell and some of them were heart-warming, some of them brought a smile to me. She enjoyed the kind encounters she had in India. She had a great gift to connect to people. She would go on a shopping spree and come to the hotel with many gifts she received from the shopkeepers. She was longing to show to those beautiful things to me on her return "

Naomi wanted to have her nose pierced for quite some time, she says. "But we were not really for it, it is not traditional here but when she asked permission to do it when she was in India, we consented, and she was very happy for it."

Kia also remembers telling her daughter how to conduct herself in India. Though Kia had never visited India, she knows people are expected to dress modestly over there.

"Naomi was going there for a spiritual retreat," she says with a gentle laughter. "But there I was telling her to dress appropriately. Not to wear tight jeans or anything revealing." Kia sighs a little: "You see she was a teenager."

Ashes of Alan and Naomi are placed deep within the woods at the Foundation and there is an eternal flame burning not far away.

"The flame is for everyone who died in the attack," she says. Hardly a day passes without her visiting the site and offering prayers. She also remembers a beautiful ceremony held there after the ashes were brought.

"There were prayers and songs from all the faith. A Muslim woman offered wisdom from the Koran. Someone sang Ave Maria. And we also heard the thoughts of Ramakrishna (Paramahamsa)." She had also received hundreds of messages from India and from people of all faiths. "Particularly Muslims," she adds. "People across India had somehow managed to reach me through Synchronicity."

She has been consoling herself using meditation, reading literature, and working with Master Charles and children's book writer and illustrator Linda Ragsdale, then 49, who was hurt badly in the attack in Mumbai. One of the projects they are involved in getting children create paper dragons. 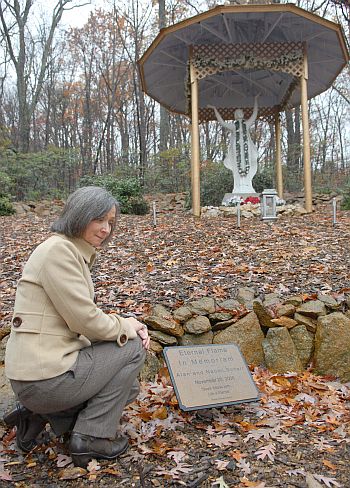 "I get a lot of consolation and inspiration when I read the writings of Ramakrishna Paramahamsa or the wisdom attributed to him," Kia says.

She quotes a passage in which Ramakrishna was speaking to his disciple, Keshab: 'When the tadpole drops its tail, it can begin to live up on the land and beneath the water. You can go out into the world without losing your awareness of God.'

The Sufi poet Rumi is another big influence.

"I recite the following poem time over time," she says. "I think of Alan, Naomi and millions of others who have suffered needlessly."

Her voice is soft and gentle, her eyes are glowing, and she exudes a serene smile as she recites:

I have come this time
to burn my thorns,
to purify my life,
to take up service again
in the garden.

Be foolishly in love,
because love is all there is.
There is no way into presence
except through a love exchange.
If someone asks, but what is love?
answer, Dissolving the will.
True freedom comes to those
who have escaped the questions
of freewill and fate.
How long do you lay embracing a corpse?
Love rather the soul, which cannot be held.

Contain all human faces in your own
without any judgment of them.
Be pure emptiness.
What is inside that? you ask.
Silence is all I can say.

Ramakrishna Parmahamsa and Rumi are very much on her mind all through the day as she works on one world alliance with Master Charles and Linda.

"My biggest consolation came when Master Charles told me that all that had happened had a purpose and we were to work towards creating a life force," she says.

"Master Charles was a huge influence on us," she muses. "After the horrible tragedy he has become even a bigger life force for me. I know the poet and philosopher Rumi was beholden to his master. I feel similar kinship with Master Charles."

Getting children work on dragons is indirectly therapeutic to her as well as Linda Ragsdale and One Life Alliance.

"When we think of dragons, we think of ferocity and negative feelings," she says with a chuckle. "But we get the children to think of them as symbols of peace who can bring children from all over the world together. Children are not political like their parents, and by bringing them to like each other, to love each other, and getting them to see unity among themselves instead of the differences, we can help create a new world step by step."

When she visits India and Pakistan and get children to make the peace dragons and try to have them exchanged across the border, she would love to offer ice creams to the kids too.