As Anna breaks his fast, his village erupts in euphoria 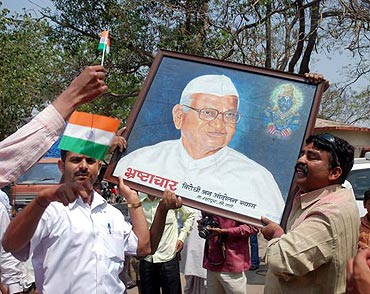 No sooner did Gandhian Anna Hazare broke his fast unto death by offering water to some women fasting with him, villagers in Ralegan Siddhi, his native place, some 250 km south east of Mumbai, celebrated the moment by bursting crackers and dancing.

"This moment has given us more happiness than watching Dhoni (captain of World Cup wining Indian cricket team) hit the six to win the World Cup," said a euphoric Vilas Avati, a resident of the village who had tonsured his head in support of Anna's campaign against corruption.

A few moments later a small ramshackle truck, fitted with stereo speakers and sound system emerged on the scene and people -- young and old, poor and rich, men and women, small boys and girls from nearby schools -- performed an impromptu jig in support of their beloved Anna.

'We are happy, but we still have lots to travel' 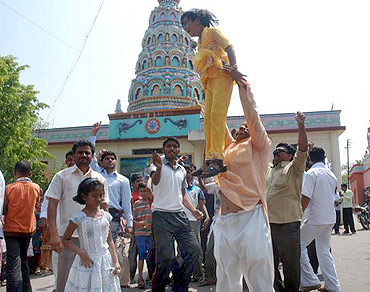 "Centuries ago the great Maratha warrior Shivaji had challenged the might of Delhi. Today another Maratha warrior Anna forced the rulers in Delhi to concede the just demands of our leader," said Vasant Pathare, another resident of Ralegan Siddhi who was part of the boisterous show.

However, some people in the village were cautious. They said they will celebrate only when the Jan Lokpal bill actually becomes a law and helps the nation weed out corruption.

"We are happy but still we have to travel lots of distance," said Abaram Patil, a lecturer who teaches water management programmes at Anna Hazare's Hind Swaraj Trust.

Anna's younger brother Marutirao Hazare said, "India cannot have more than one Gandhi. But my brother has proved that people can definitely walk on the path of non-violence and satyagraha to bring about social, economic and political change. He is like a modern-day Gandhi," Marutirao said.

'There is no weapon more portent than non-violence' 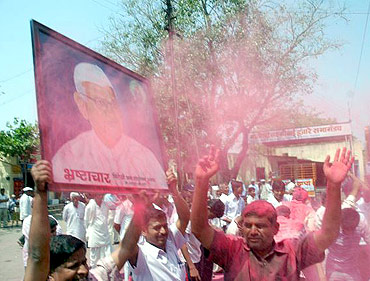 Dnyaneshwar Mapari, a soldier based from the Maratha Regiment, who returned to his village three days ago, also joined the ecstatic villagers when Anna broke his fast.

Dnyaneshwar had something interesting to say. Pointing to the agitation of Gujjars in Rajasthan, he said, "The Gujjars have been agitating since last one year through violent means but still couldn't get their demands met by the government. But just one man through non-violent means and through Mahatma Gandhi's principles has achieved something very substantial for the nation in just five days."

"There is no weapon more potent than the might of satyagraha and non-violence," he said.

He said that there is no justification in killing self in order to achieve something, referring to decision taken by the villagers to immolate themselves if Anna's demands were not accepted before April 12.

"Things that you can do when you are alive cannot be achieved after death," he said referring to Anna's teachings.

Interestingly, in their euphoria to celebrate Anna's ending of his fast-unto-death, most villagers of Ralegan Siddhi were defying Anna's Gandhian principles of simple living and noble thoughts.