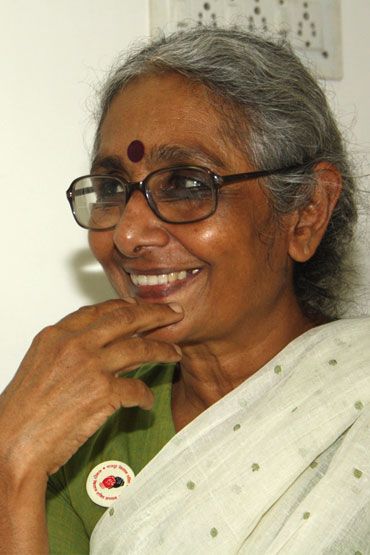 Talks between Team Anna and the government have slipped from 'breakthrough' to 'breakdown' within a span of 24 hours.

Team Anna wants the Jan Lokpal Bill to be passed without going through Parliament's standing committee. The government and Opposition has made it clear that the parliamentary process cannot be 'short-circuited.'

Aruna Roy, prominent member of 'civil society', chairman of the National Campaign for People's Right to Information, and an alternative voice in the ongoing debate on the Lokpal Bill, spoke to Rediff.com's Toral Varia and Rajesh Karkera.

'It is a battle for Constitutional democracy' 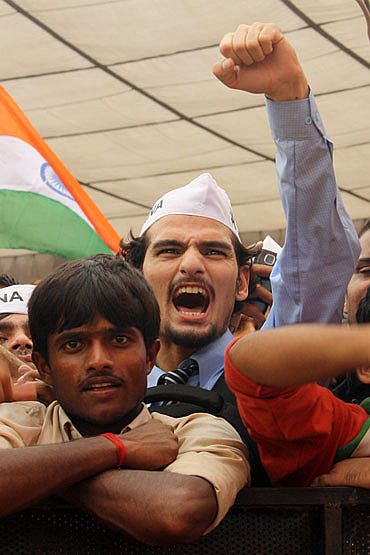 Do you agree with the manner in which the India Against Corruption movement is being conducted from April to till date? Not the cause, but the manner.

I also believe that the parliamentary process is important not only for the government, though this is the wide interpretation of everything I say because its convenient for people whose point of view I contradict to say that I am a 'government voice.'

They said there should be separation of powers; I feel there is a reason to it.

But you can't say 'throw the baby out of the bath water and then I will decide!' Then tomorrow are we going to have courts outside? Are we going to get every system outside?

Government is a huge, mammoth establishment with many sets of sub-establishments. Anything that fails, are we going to set up a substitute outside?

But this is a massive exercise in taking things out. So at that level there is a problem because you really must get Parliament to work for you, and that's a challenge. And if we really want democracy to continue in India, we will have to do that.

That is for the legislative process. That is a fact for me, even though Prashant Bhushan and Justice (Santosh) Hegde disagree with me.

Parliamentary bills must go through a certain process.

So these are all process issues. I do not like to shrink the idea into personality conflicts. It has been a huge problem with the media. It is not my battle. 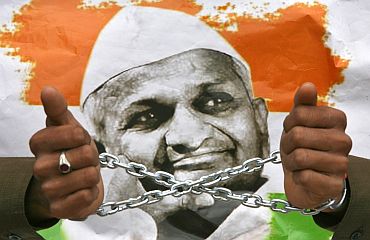 Would it be right to say that an alternative section of 'civil society' believes that following parliamentary processes is extremely important and above the movement or agitation that is happening right now?

Do you really think that the demands made by Team Anna are justified?

Please remember that before it goes into Parliament, people have the right to say what they want and I am fighting for that right myself.

I fought for it during the process for the Right To Information Act, fought for it in the National Rural Employment Guarantee Act and now we are fighting for it through the pre-legislative process.

But once it goes into the legislature, even if we say that I dislike the bill, that I am going to draft the bill today, then who is this 'I'?

Is it guaranteed that 'I' will cover the interest of all the sections of society?

However well I may think of myself as 'I', because of my own beliefs and faith in my constituency, does it become superior to other people's constituencies?

This is a nation. So if you look at the nation, then you must give equal access to all constituencies.

By constituencies I do not mean parliamentary constituencies, but people who think in a certain way. They all have equal rights to elaborate and depose on a bill that will affect all citizens.

That's why the parliamentary process is important. The standing committee is not the government. It has representations from all political parties, remember that.

'Anna is very precious for all of us' 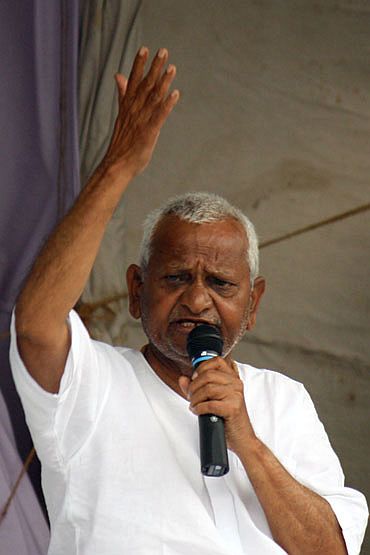 As compared to Team Anna, you have an alternative view on how the Lokpal Bill should be drafted and what processes should be followed to pass the same.

On the ninth day of his fast, you met Anna Hazare. What was the purpose of that visit?

I went to meet Anna because he has been on a hunger strike and Wednesday was his ninth day. I went to meet him in my individual capacity as someone who has known him for many years, wanting to wish him well and to persuade him not to jeopardise his life, because he is very precious for this country and for all of us. There was nothing more than that in my visit to Anna.

Do you think this campaign is short-sighted in its approach?

I think the campaign has not worked out the consequences of what it is doing.

For me the greatest fear is that we take up something because it is fantastic for the moment, but the consequences of what it is doing, the euphoria of it has blinded even the activists who have struggled all their lives.

'Big money must have come for this campaign' 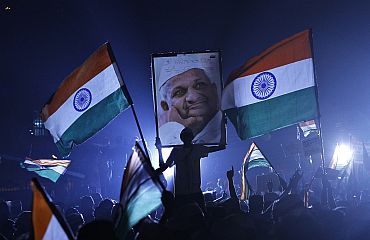 You and Arvind Kejriwal worked together on the Right to Information Act. Why the fall-out?

I started working on the RTI with other colleagues in 1994. Arvind Kejriwal joined us in 2002-2003 when the law was drafted.

He worked with me till 2006. He got the Magsaysay Award for Eminent Leadership. Recognition apart, the long term activists with whom I worked are still with me. Many of them have died.

Arvind joined us and left us. Maybe he learnt enough from our campaign. He left us on issues of differences on how to run the (RTI) campaign further.

He is not the only voice. We all have stayed together in the NCPRI (National Campaign for Peoples' Right to Information), he is still on our working committee, but he rarely attends meetings while we all attend meetings regularly.

For campaign activities, we still come to the NCPRI. He has chosen to walk out of it. The onus is not on me.

The manner in which the India Against Corruption movement has been organised, managed and maintained clearly showcases a high level of professionalism.

The finances behind the campaign are now being discussed in the media and outside. What is your understanding?

I haven't studied the finances, so I don't really know from where the finances are exactly coming from. But I certainly do know that big money must have come in for this kind of super management.

So, if you have a corporate design for management of a people's campaign, then it brings in other questions, not of finances, but the kind of people involved in the campaign.

But the more pertinent question for me is whether such big money would come for other campaigns as well. It all boils down to money transactions.

I remember earlier I used to send SMSes to my 50 friends. They would then send it to others and that is how it used to be.